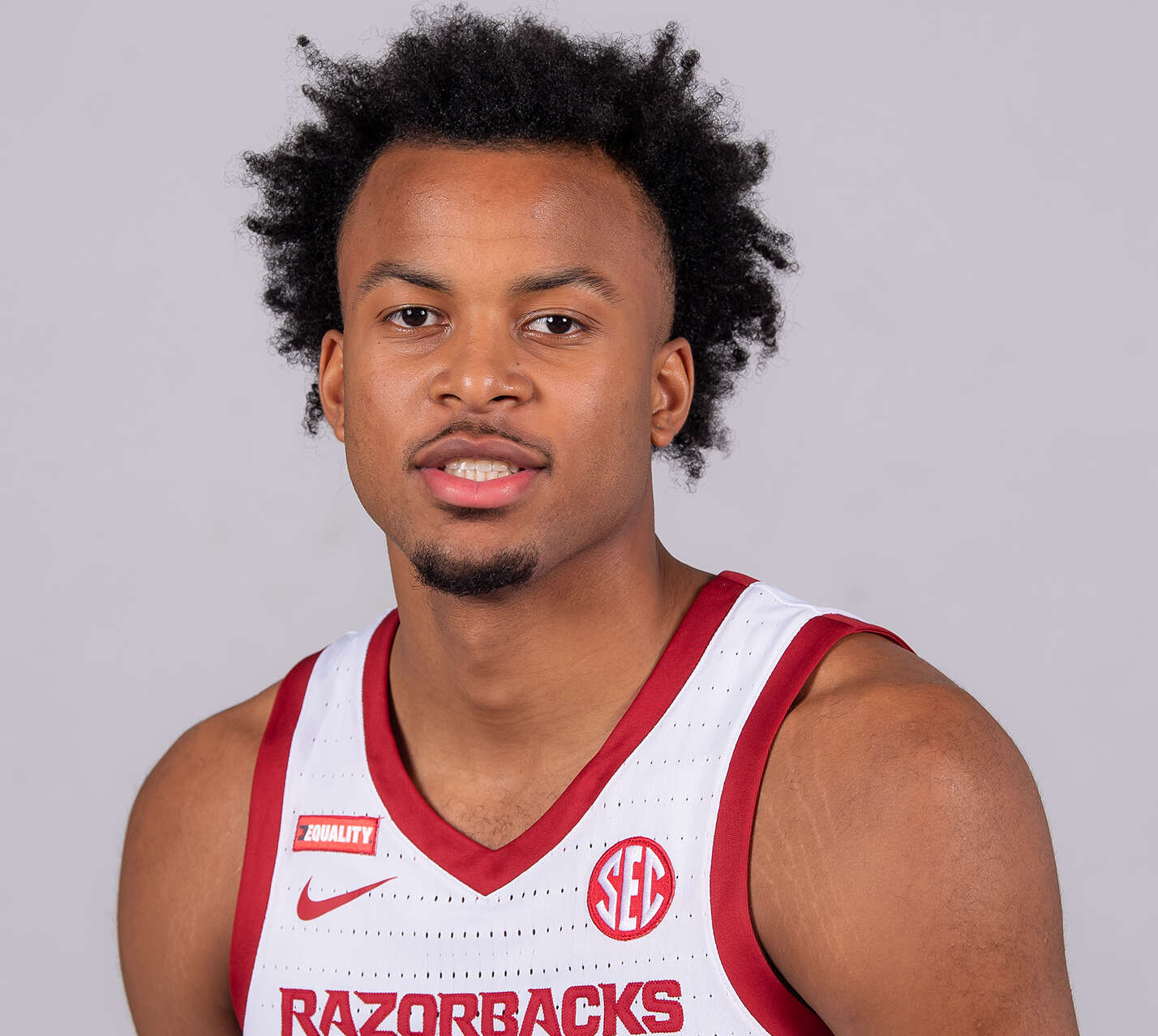 • Selected by the coaching staff to serve on Arkansas Athletics’ African American Student-Athlete Leadership Council.
• Member of Arkansas’  Student-Athlete Advisory Committee.
• Made the AD’s Honor Roll (GPA between 3.5-3.99) for Fall 2020
• Near consensus pick as an NBA lottery pick in 2021 mock drafts

• Scored 19 in his collegiate debut — making 9-of-10 from the free throw line … Added three steals
• Named SEC Freshman of the Week / College Sports Madness SEC Player of the Week (Dec. 7) … Averaged 21 points and 8.5 rebounds in wins over UT Arlington and Lipscomb … Was 14-fof-20 from the field – including 4-of-6 from 3-point range – while going 10-of-13 at the free throw line … Had game highs with 24 points and nine rebounds versus UTA (first Hog frosh since Bobby Portis in 2014 to have at least 24 and nine in a game … Followed that with an 18-point, eight-rebound performance versus Lipscomb. Moody made 7-of-his-8 shots, including 2-of-3 from 3-point range
• Stuffed the stat sheet versus Central Arkansas with 15 points, seven rebounds, three assists, two steals and a blocked shot
• Led all scorers with 21 points in the Abilene Christian win
• Tied for the team lead with six rebounds at Auburn … Scored 16 points, including two early 3-pointers to set the tone in the win
• Recorded his first career double-double versus Mizzou (1/2) with 18 points and career-high 10 rebounds … Made a season-high four 3-pointers
• Scored 25 points in the win over Georgia … Had a team-best and season-best 11 deflections
• Had 18 points at LSU, including 13 in the second half to help Arkansas outscore the Tigers in the period … Added six rebounds (four offensive)
• Led the team in both points — career-high 28 — and rebounds — season’s second-best total of nine — at Alabama … Scored 14 of Arkansas’ first 15 points … His 25 field goal attempts were the most by a Razorback since 2010 and ties for fourth-most by a Razorback in an SEC game
• Only scored five points in the win over Auburn and was 0-of-4 from 3-point range … However, all five came in the final nine minutes of the game … With the game tied at 56, got an offensive rebound and put-back to give Arkansas a lead it would not relinquish … Sealed win with a defensive rebound with three seconds left
• Scored a game-high 26 points (13 in each half) at Vanderbilt with a team-best eight rebounds
• Made 8-of-13 shots for 17 points (11 in the second half) at Oklahoma State
• Led the team in scoring with 13 points versus Mississippi State, adding seven rebounds and two steals … Scored 11 of the team’s 28 first-half points
• Named College Sports Madness SEC Player of the Week (Feb. 15) after road wins at Kentucky and at Missouri … Had 12 points at Kentucky and tied for the team lead with seven rebounds … Only played nine minutes with three points and two rebounds in first half … Played all 20 minutes of the second half with 11 points (3-of-5 3PT) with five rebounds … At Missouri, scored Arkansas’ first seven points but picked up two early fouls to sit most of the period … Played the final 25 minutes of the game and made two big plays in overtime to get the win … Had an assist to give Arkansas the lead with 58 seconds left, had a steal and followed by two free throws with 12 seconds left to go up three
• Struggled a little vs Florida but finished with 14 points thanks to 6-of-7 at the free throw line … Added three assists, a steal and two blocked shots … Was 6-of-6 at the line inside the final 1:40
• Named SEC Freshman of the Week (3/1) in wins over the top two teams in the league as he averaged 21.0 points and 6.5 rebounds while setting career highs in both games for assists and had a career-high for blocked shots. … Scored a game-high 24 in the Alabama win, (16-of-19 at the free throw line) … added then career highs in assists (4) … Tied career high with blocked shots (3) .. Then pumped in 18 in the LSU win as he set a career high in assists (5) with eight rebounds
• Named SEC Freshman of the Week (3/8) for the second straight week … He tied his career high by scoring 28 points in both wins while shooting 63 percent from the field and 52.9 percent from 3-point range (tying his career-high with four triples at USC only to top it with five versus Texas A&M) while playing 70 minutes with zero turnovers … At South Carolina, tied career highs in points (28), FG Made (10) and 3’s Made (4) … Had 17 first-half points, making 7-of-11 from the field and three 3-pointers … Perhaps saved his best for last in the season finale win over Texas A&M .. Once again tied his career high with 28 points while making a career-high five 3-pointers (5-of-8) … Added five rebounds, two assists and two steals … Made a huge block with 1:30 left and the game tied — A&M looked to have a dunk but Moody blocked it at the rim.
• Only scored five points (2-of-6 shooting) in the SEC tourney win over Mizzou … HOWEVER, was superb in all other facets of the game … Tied for the team lead in rebounds (8), had a team-best 11 deflections, took five charges.
• For the third time in four games, tied is career high with 28 points versus LSU in the SEC semifinal … Also led the team in rebounds (9) with two steals and 10 defections
• Struggled from the field vs Oral Roberts in the Sweet 16 but still scored 14 points with six rebounds … Tied career high with three blocked shots,
• Made 7-of-8 free throws versus Baylor in the Elite 8 to score 11 points, adding five rebounds.

High School:
• Was rated the 37th-best incoming freshman in the nation and the 8th-best combo guard by 247Sports.com
• Was rated the 41st-best incoming freshman in the nation and the 9th-best shooting guard by 247Sports.com Composite
• Was rated the 42nd-best incoming freshman in the nation and the 10th-best shooting guard by ESPN.com
• Was rated the 53rd-best incoming freshman in the nation and the 13th-best small forward by Rivals.com
• MaxPreps All-American Honorable Mention (1 of 50 recognized; 1 of 4 on his team)
• Was 1 of 50 on the Naismith Award for high school players
• Montverde Academy was consensus #1 in the national (25-0)
• Highest-rated player to sign with Arkansas since five-star (#16 national rank) Bobby Portis in 2013.
As a senior, averaged 11.6 points 3.3 rebounds and 1.8 assists while shooting 60.1 percent from the field, 46.9 percent from 3-point range and 82.1 percent from the free throw line this season … Helped Montverde earn the nation’s consensus #1 ranking, going 25-0 in the regular season … Led Brad Beal Elite in scoring (17.7 ppg) on the 2019 Nike EYBL (Elite Youth Basketball League) circuit and was named All-EYBL honorable mention. He was selected to be a part of Pangos All American Camp, NBPA Top 100 Camp, Team USA U17 training camp and USA Basketball Junior minicamp … Prior to being a two-year starter at Montverde, was named to the Arkansas 7A All-State team in 2018 as he led North Little Rock HS to state championship (over Isaiah Joe’s Northside HS team) and was named the tournament MVP … Was additionally named to the Arkansas Democrat-Gazette All-Underclassman team as he averaged 18.6 points, 7.2 rebounds, 3.1 assists, 2.1 stats and 1.4 blocks as a sophomore. As a freshman, Moody played on a Little Rock Parkview HS team (with Razorback student assistant Khalil Garland) that advanced to the state championship.