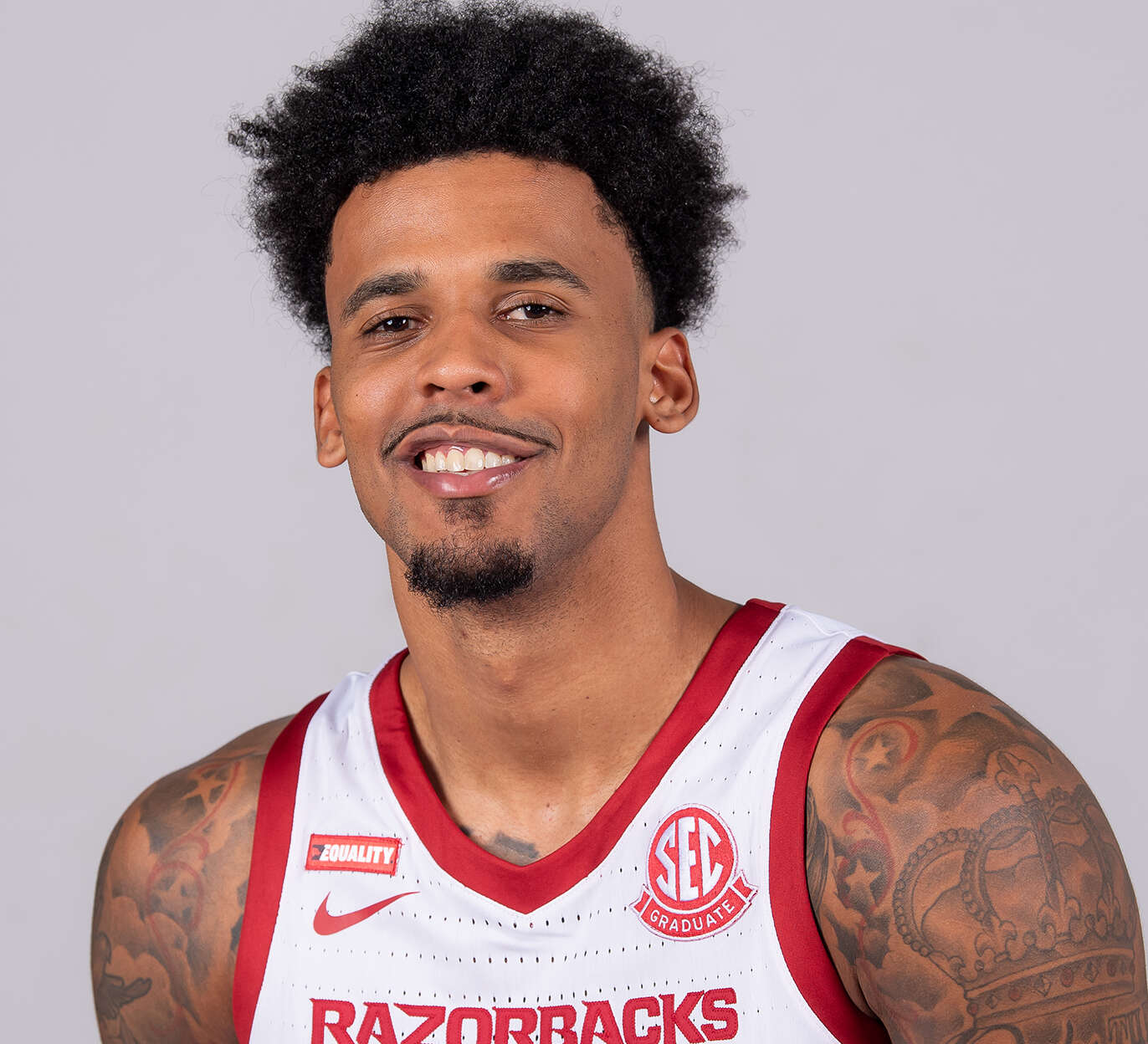 Senior (2020-21 at Arkansas):
PLayed in 26 games with three starts … Eclipsed 1,000 career points and 500 career rebounds, getting 15 and seven respectively, in season-opening win vs Mississippi Valley … Made four treys during a 28-0 run in the first half … Finished 4-of-6 from 3PT … After back-to-back games with no points, scored 10 in the win versus Lipscomb, making a pair of 3-pointers … Played 22 minutes versus Abilene Christian (22; high of 23 vs Lipscomb) … Had two assists and his first two blocked shots of the season … Had a breakout game at Tennessee … Played a season-high 33 minutes … Scored 14 points (2nd-best of the season) with a season-best nine rebounds (all defensive) … Made 3-of-6 from 3-point range and added nine rebounds … Followed that by scoring 15 points —making 4-of-5 from 3-point range — in the win over Georgia … Entered the Alabama game with three steals in 13 games but had three alone versus the Crimson Tide … Only played 4:44 in the home win vs Auburn but sank a key 3-pointer late in the first half to start Arkansas’ comeback from 19 points down … Was effective in his 17 minutes at Vanderbilt, going 2-of-2 from the field (both 3’s) and grabbing three rebounds … Drained two triples at South Carolina to end a dry spell with just two 3-pointers over an eight-game span.

Junior (2019-20 at New Mexico):
Played and started 28 games, missing five contests due to a knee injury … Had three double-doubles and scored at least 20 points four times with the Lobos going 3-1 in such games … One of his 20-point games came after he missed the five games due to injury, scoring 20 while tying his career-high of six 3-pointers made (6-of-8) … Prior to his injury, recorded back-to-back double-doubles … First, at San Jose State, pumped in 29 points – going 8-of-10 at the free throw line – with a career-high 13 rebounds (nine defensive) … The following game versus Fresno State, had 29 points, going 6-of-7 from 3-point range) with 13 rebounds once again (a career-high 12 defensive) … Notched his third double-double of the season with 26 points and 12 rebounds on 9-of-16 shooting versus San Jose State in the first round of the Mountain West Tournament.

Redshirt Sophomore (2018-19 at New Mexico):
Named to the 2019 Mountain West All-Tournament team after averaging 25.5 points, 6.0 rebounds, 5.0 assists and 3.0 steals per game in 25.5 minutes in the 2019 Mountain West Tournament… Was the first player in Mountain West history to earn a spot on the All-Tournament team without advancing past the quarterfinals… Saw action in all 32 games for the Lobos including 16 starts… Finished second on the squad averaging 13.1 ppg and 7.0 rpg … Accumulated 23 double-digit scoring performances including a career-high 30 points, going a career-best 10-of-11 at the free throw line, versus Fresno State on Feb. 16… His 30-point game was the first for a Lobo since 2017… Collected five double-doubles on the season… First career double-double was scoring 18 points with 12 rebounds (10 defensive boards) versus Iona in his second game with the Lobos … Posted three double-doubles over a five-game span … First, nearly had a triple double versus Nevada, scoring 18 points, grabbing 10 rebounds and dishing out a career-high seven assists … Two games later, had 18 points and 12 rebounds at Colorado State … Two games after that, turned in 13 and 10 versus Wyoming … Ended the regular-season with a 13-point, 11-rebound performance at Wyoming … Named Preseason MW Newcomer of the Year.