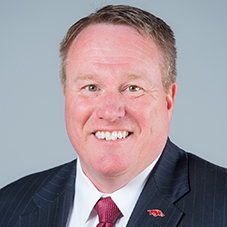 An Arkansas native and University of Arkansas graduate, Matt Zimmerman returned to his alma mater in 2011 and spent eight years with the Razorback men’s basketball program in 2018-19.

After spending five years as a member of the coaching staff, Zimmerman was the Director of Basketball Operations for three years prior to joining the Razorback Foundation in the fall of 2020. In addition, Zimmerman has served as a color analyst for men’s basketball with the Razorback Sports Network, assisting on the football broadcasts since 2020 and co-host of the Razorback Daily podcast.

Zimmerman’s coaching career began in the high school ranks in Arkansas, where he spent seven years as a head coach at both Dardanelle High School and Planview-Rover High School.

Zimmerman was a manager for his alma mater under Naismith Hall of Fame head coach Nolan Richardson.

A 1990 graduate of Arkansas with a degree in physical education and four years in the ROTC, Zimmerman joined the United States Army after he earned his degree. He would spend five years in the military, earning the rank of Captain, graduating from Airborne School in 1991 and serving with the 1st Infantry Division (The Big Red One) from 1991-95. His other experiences in the military included Platoon Leader, Shop Officer, Company Executive Officer and Battalion Adjutant.