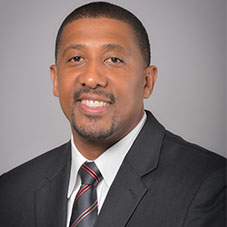 Responsible for one of the most memorable moments in Arkansas basketball history, Scotty Thurman is in his sixth year as Director of Student-Athlete Development and fifth under head coach Mike Anderson in 2015-16.

Thurman also enters his second year as a member of the Razorback Sports Network, joining play-by-play veteran Chuck Barrett as a color analyst for the men’s basketball season.

No stranger to Arkansas basketball, Thurman provided his signature moment in the final minute of the 1994 NCAA championship game when his three-pointer with 53 seconds remaining secured a 76-72 win over Duke.

Thurman returned to the Razorbacks in 2010-11, after successful professional and business careers to assist the student-athletes associated with the men’s basketball program with their growth as individuals off the court. He is responsible for coordinating and developing programs that enhance personal and career development, along with participating in various community service efforts.

Along with his duties as a mentor to Arkansas’ student-athletes, Thurman is also charged with bridging the gap between Arkansas’ current and former players. Those results are evident, as Razorback greats like Ronnie Brewer, Darrell Walker, Lee Mayberry, and Todd Day, as well as others, have already heard the call of one of their own.

Thurman assists with academics and he is a member of the Razorback Foundation’s External Operations Team and the Athletic Director’s Diversity Council, as well as, the Never Yield steering committee.

As a player for the Razorbacks, Thurman’s three years were some of the most decorated in program history, as he helped lead Arkansas to an 85-19 record over that span. The only player in Arkansas history to be named to the All-SEC first team three times, Thurman still ranks 10th on Arkansas’ all-time scoring list with 1,650 points. He continues to hold Arkansas’ single-season record for three-pointers in a season with 102 and ranks second on the career three-point chart with 267.

Following his first stint with the Razorbacks, Thurman played 11 seasons of professional basketball overseas in Lebanon, Greece, Cyprus and Italy. His successful pro career came to a close after the 2006 season and Little Rock, Arkansas, became his permanent home. There, he worked in the real estate field and, eventually, began working for Episcopal Collegiate School as Director of Community Relations, as well as being a teacher and coach.

Thurman received a bachelor’s degree from Philander Smith College in 2003 and his Masters in Secondary Education from the University of Arkansas at Little Rock in 2012. He and his wife Regina have two children, Scotty Jr., and Romani. Scotty Jr. is a junior at Arkansas and is a receiver for the Razorback football team, receiving a scholarship prior to the start of the 2014 season.