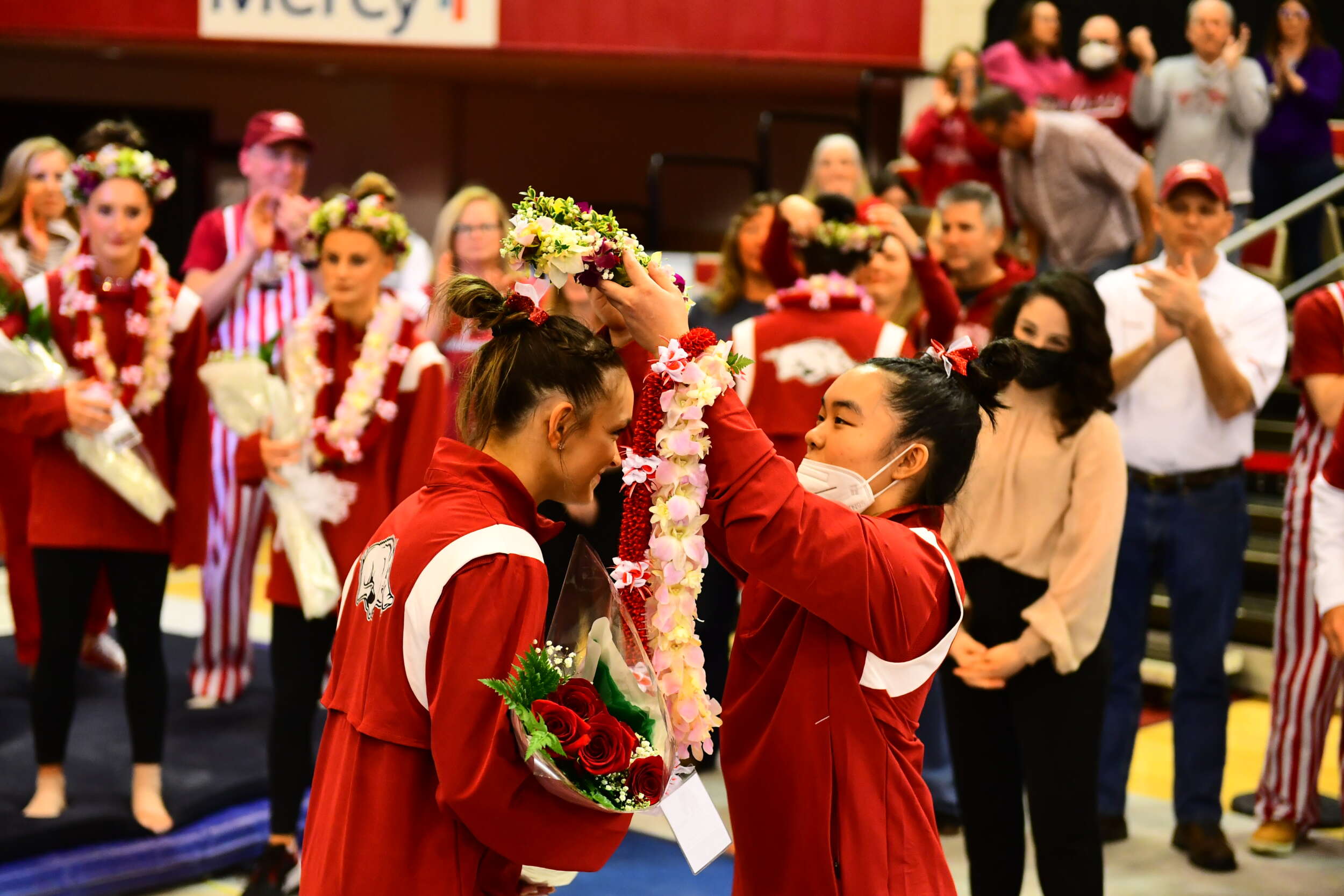 While the Gymbacks didn’t come away with a victory on Friday, the team sent off its seniors with some more event titles and its biggest crowd at Barnhill this season to cap off their Arkansas careers at home.

The meet was highlighted by a pair of event titles for senior Amanda Elswick on vault and beam. Her 9.900 on vault matches a career high and she also scored a 9.900 on beam, her fourth score above 9.900 on the event this season. She shared the beam title with freshman Leah Smith and fellow senior Bailey Lovett.

Senior Kennedy Hambrick also racked up some wins in her Barnhill farewell, on floor with a 9.925 as well as the all-around victory.

All seven of the team’s seniors – Elswick, Lovett, Hambrick, Maggie O’Hara, Sarah Shaffer, Abby Johnston and Savannah Pennese – were honored postmeet for their dedication and accomplishments both in and out of the gym through the years.

The atmosphere was fitting for a celebration, with 4,907 fans in attendance, the team’s biggest home audience since their meet at Bud Walton Arena on Jan. 14 and best at Barnhill Arena in 2022.

Vault
A stuck Yurchenko full from Pennese got Senior Night and Arkansas off to a strong start. Smith and Shaffer followed with a pair of 9.850s, and Elswick came up big in the fourth spot with a team-best 9.900. Hambrick finished with a 9.850, and the Gymbacks scored no less than 9.800 during the rotation for a 49.250 total.

Bars
Smith started the bars lineup with a 9.800 and the scores in the first half of the lineup built from there. Sophomore Jensen Scalzo again turned in a consistent performance as she has week after week and stuck her double layout dismount clean for a 9.825. Freshman Maddie Jones was next up and floated through each of her releases. She finished with another stuck double layout and posted a team-best 9.850. Arkansas had to count two falls in the second half of the bars lineup and finished with a 48.150.

Beam
The Gymbacks needed to bounce back in a big way on beam and did just that. Freshman Kalyxta Gamiao led off for the Hogs for the second week in a row and showed all the poise of a seasoned veteran. She was steady all the way through and nailed her 1.5 twisting dismount with a stick for a score of 9.850. Smith stepped up in the third spot with a smooth routine and stuck her double back dismount for another big rookie performance and a score of 9.900. Lovett started her senior night with a bang and a solid 9.900 routine, which brought Elswick up to anchor. Her final beam routine in Barnhill Arena was a beauty with solid acro and a stick for another 9.900. Arkansas’ 49.325 on beam matches the team’s second-highest mark this season.

Floor
The last home floor party of the season didn’t disappoint. The freshman duo of Jones and Makie Sedlacek in the second and third spots for Arkansas posted 9.875 scores to round out a solid first half of the lineup. Hambrick then took the floor and shined with a stellar 9.925 routine, complete with three stuck passes. Lovett kept the momentum going and nailed her signature double layout for the last time on Barnhill. The next two passes were just as strong and she scored a 9.875. Shaffer anchored the rotation and the meet for Arkansas, a bittersweet ending to her outstanding six-year career. She had a solid showing and scored a 9.825 for Arkansas for a final of 49.375 on floor, the team’s second-highest this season and their 39th straight meet with a 49 or better on floor.

Up Next
Arkansas finishes its SEC dual slate with a meet against Alabama in Tuscaloosa on Friday, March 4 at 7 p.m. The Gymbacks then travel north to Huntsville for Elevate the Stage with Alabama, Auburn and Georgia on Sunday, March 6 at 1 p.m. at Propst Arena.