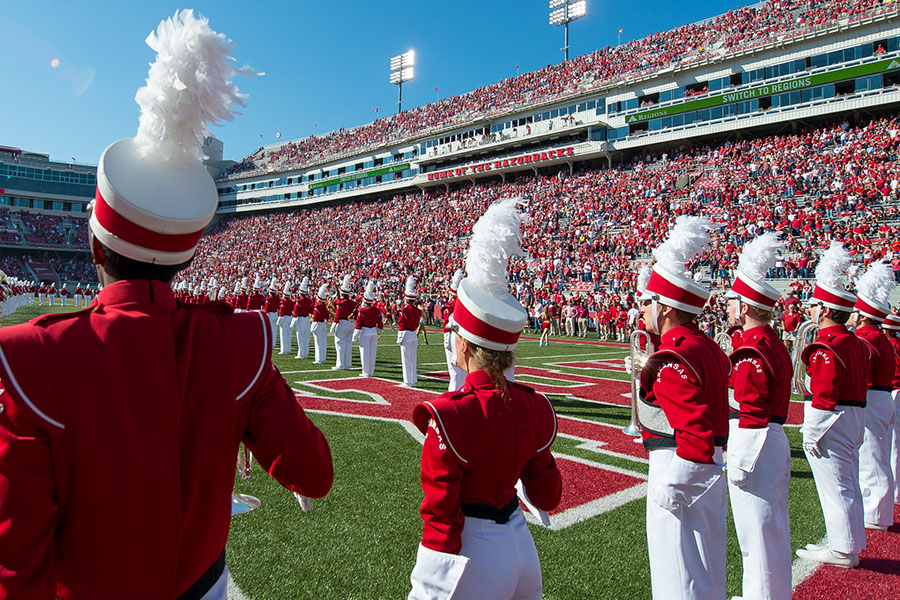 Traditions to Take Center Stage in 2019

FAYETTEVILLE, Ark. – History and tradition have always been an integral part of the fabric of Razorback Football. In 2019, Razorback fans can once again participate in some perennial gameday traditions, while also enjoying some new twists to some longstanding favorites.

Always a fan favorite, the traditional “Hog Walk,” the arrival of the Razorback football team to the stadium, will extend to allow more fans to be a part of this great gameday moment. Coach Chad Morris and the team will begin its walk two hours and 15 minutes prior to kickoff north of Victory Village and the Tyson Poultry Science Center and proceed through the tailgating area to the new HogTown Street Festival. Once to HogTown, the Razorback Band, spirit squads and Tusk V will help lead the team across Maple Street and through the parking lot to Donald W. Reynolds Razorback Stadium.
Tusk V will be making his debut as the University of Arkansas’ live mascot in 2019, after taking over for his father, Tusk IV, who retired in June. Tusk V will be at the HogTown Street Festival beginning four hours before kickoff. The best live mascot in the country will be available for photos and even a few autographs before meeting up with the football team for the Hog Walk. Tusk V will then make his way to the field to be in place for kickoff.

Once inside the stadium, fans can take advantage of the new University of Arkansas Sports Hall of Honor. The all-sports museum, located in the north end zone of the stadium, celebrates the legendary Razorbacks who have earned the highest honor Razorback Athletics can bestow. The Hall of Honor includes interactive displays that help tell the history of the storied Razorback program. The Hall of Honor can be accessed by all fans on gameday through doors located on the mezzanine concourse.

The Razorback Marching Band has always been a staple of the gameday experience. In 2019, they will have even a bigger starring role on gameday. Approximately two and half hours before kickoff, the Razorback Marching Band will parade up Razorback Road from the Walker Pavilion to get in position for the Hog Walk. Following the team entering the stadium, the band and spirit squad will move to the stage inside HogTown to perform and the drumline, along with Tusk V, will make an appearance and perform two hours prior to kickoff at the Wild Band of Razorbacks monument. The band will also be featured within the stadium, including the addition of further amplification to allow it to be heard more clearly throughout the stadium. The band will feature an enhanced song library and will employ some special effects during their pre-game and halftime shows. It all adds up to even more to look forward to from “The Best in Sight and Sound.”

And, don’t worry, traditional favorites like the Hog Call, William Tell Overture and “Running Through the A,’ aren’t going anywhere. After all, it is those classics, with some new additions along the way, that keep Razorback fans coming back to Donald W. Reynolds Razorback Stadium generation after generation.