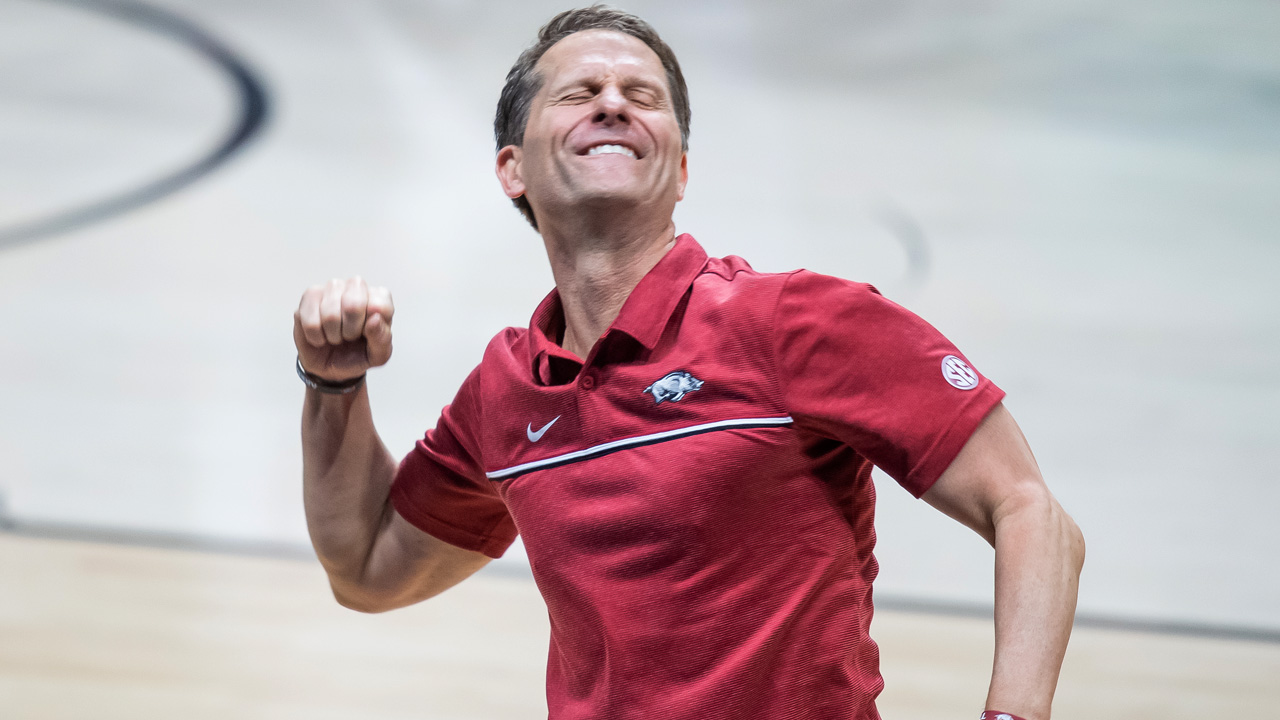 “We are excited to welcome Stanley to the Razorback family,” Musselman said. “He brings great versatility and was extremely well-coached at South Dakota by Todd Lee. He has a lot of experience and has a winning background. We feel the addition of Stanley and Au’Diese (Toney) on the wings will give us the ability to play position-less basketball.”

He scored 1,520 points in his career to rank 11th on the Coyotes’ all-time list while pulling down 549 rebounds (24th in USD history) with 183 assists, 91 blocked shots (8th in USD history) and 55 steals. He had a career field goal percentage of .470, including .342 from 3-point range, and he shot .748 from the free throw line. Umude recorded 13 career double-doubles, including five in each of the last two years.

2020-21 (Senior at South Dakota):
Tabbed first team All-Summit League … Voted NABC second team All-District 12 … Led the Coyotes in scoring, ranked ninth in the NCAA and was second in the Summit League with 21.6 points per game while averaging 20.9 points in league play … Raked 32nd in the NCAA (2nd in the Summit League) free throws made (115) and 38th nationally (third in the conference) in defensive rebounds (6.48 average) … In the Summit League, ranked third in double-doubles (5), eighth in field goal percentage (.471), second in free throw attempts (144), eighth in free throw percentage (.799) and fifth in rebounds (7.0) … Scored a career-high 41 points, making 17 field goals in the process, versus South Dakota State … The 41 points tied for the fourth-best, single-game production in the nation for the season while his 17 field goals made were the most in NCAA Division I … Recorded 20-plus points 14 times and 30-plus points five times … Was one of three players in the nation to score 37 or more points twice … A two-time Summit League Player of the Week … The Summit League December Athlete of the Month … Recorded games of 24 and 23 in USD’s two games at the conference tournament in Sioux Falls, S.D., to earn a spot on the Summit League All-Tournament team.

2019-20 (Junior at South Dakota):
Earned second team All-Summit League … Started in all 32 games on the season … Second on the team with 16.7 points per game, a mark that increased to 17.1 points during conference play … Grabbed 6.3 rebounds per game which ranked second on the team … Swatted a team-high 1.3 blocks per game to rank second in the Summit League while is total of 43 ranks ninth-best on the USD single-season list … Ranked in the Summit League top 10 in scoring (9th, 16.7 ppg), free throws made (6th, 117), field goal percentage (.9th, .459), double-doubles (5th, 5) and defensive rebounds (5th, 5.84 avg.) … Scored a season-high 28 points against Western Illinois (Feb. 12) … Attempted a single-game record 20 free-throws and made 14 against Oral Roberts (Feb. 15) … Recorded 27 double-digit scoring games … Scored 20 or more points on nine occasions, which was second on the team … Grabbed 10 or more rebounds five different times, leading USD … Notched five double-doubles on the season, leading USD … Led USD in scoring 13 times … Recorded 43 blocks on the season, which ranked ninth in a single-season in program history … Voted preseason Summit League Player of the Year.

2018-19 (Sophomore at South Dakota):
Voted first team All-Summit League … Earned Summit League Player of the Week on Jan. 14 … Had the top freshman-to-sophomore year point-per-game increase in the nation at 13.3 points per game … Had the nation’s largest point-per-game increase for players who played for same Division I team in back-to-back seasons … Played in all 30 games making 18 starts … Averaged a team-best 14.4 points per game … Points per game average increased to 17.1 in conference games, ranking sixth in the league … Grabbed 5.5 rebounds per game, ranking second on squad … Ranked second in Summit League (1.23 avg.) and fourth in total rejections (37) … Led the team and was ninth in the league in field goal percentage (.491) … Scored a season-high 32 points at Purdue Fort Wayne (Jan. 30) … Became just the third Coyote in six seasons to tally 30-plus points … Grabbed a career-high 11 rebounds at North Dakota State (Dec. 29) … Tallied three double-doubles on the season, leading USD … Had 10 or more rebounds on four occasions … Scored 20 or more points in eight games … Tallied double digits in 19 games … Led USD in scoring in 13 games.

High School:
Averaged 23.2 points, 6.2 rebounds, 2.4 blocks and 2.1 assists per game as a senior … Earned 28-6A All-District honors as a sophomore and senior … Averaged 24 points per game before sustaining an injury during junior season.