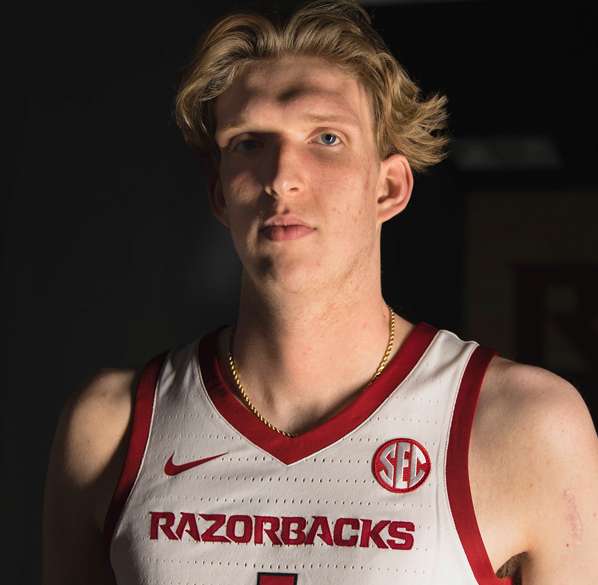 Vanover to Transfer to Arkansas

“Connor has tremendous upside,” Musselman said. “He is an incredibly unique player. At 7-3, he can stretch the floor offensively by shooting the 3-pointer and be a rim-protecting shot blocker on the defensive end.”

Vanover (7-3, 225 pounds) averaged 7.5 points and 3.0 rebounds during his freshman campaign at Cal last season, playing 28 games and starting 15. However, he came on strong to end the season as he averaged 12.8 points and 5.0 rebounds over his final 10 games. Included in the 10-game span was a career-high 24 points versus Stanford and eight boards against Southern California. While leading the team with 35 blocked shots, Vanover shot 35.5 percent from 3-point range (27-of-76).

Vanover began his high school career at Arkansas Baptist Prep before transferring to Findley (Nev.) Prep for his senior season. At Findley, he was a teammate of current Razorback Reggie Chaney and averaged 8.3 points, 7.3 rebounds, 2.5 assists in 1.3 steals. He helped the Pilots to a 32-5 record and a No. 26 national ranking.

In addition, Vanover was a member of Team USA’s U16 and U17 squads and captured a gold medal at the 2015 FIBA Americas U16 Championship in Argentina after averaging 3.8 points, 3.8 rebounds and 1.2 blocks in four games.

Vanover has two older brothers, twins Brandon and Justin. Brandon, is 7-0, rising junior and plays basketball at Central Arkansas while Justin is a 7-1 and plays saxophone with the Alabama Crimson Tide marching band.  His mother, the former Robyn Irwin, was a member of the University of Arkansas women’s basketball squad from 1986-89 and led the Razorbacks in blocked shots three times.