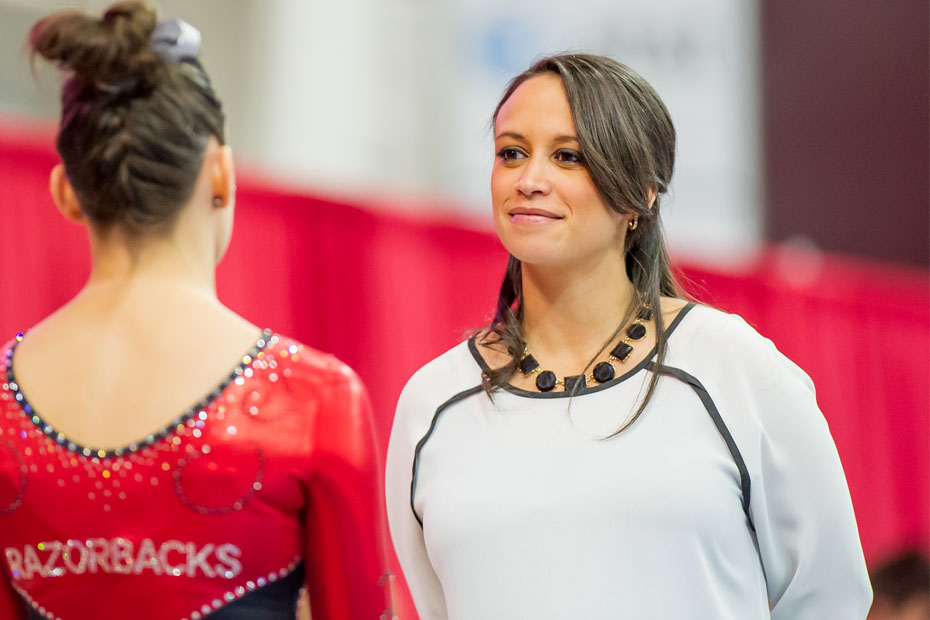 Vaulting Up In The Coaching Ranks

Snider spent three seasons as an assistant coach and two as an assistant head coach before moving into the associate position for the 2016-17 season. Snider works with many elements of the program and is the on-the-floor coach for the balance beam.

In 2016, Arkansas scored a 49.000 or better on beam in its final 12 meets of the season, ending the campaign with a 49.065 average on the apparatus. The team’s final Regional Qualifying Score of 49.195 was enough to place the Razorbacks tied for 14th in the nation. Arkansas reached a season-high of 49.325 in wins over No. 23 Kentucky on Feb. 26 and Utah State on March 11, tying the mark for the team’s second-best beam score in program history.

On five occasions in 2016, a Razorback scored 9.900 on balance beam, a feat accomplished three times by Amanda Wellick and twice by Samantha Nelson, which were career-high marks for both. In the Southeastern Conference Championship, Nelson posted a 9.900 to earn All-SEC honors on beam. Wellick’s first 9.900 came at No. 4 Alabama on Jan. 22, leading Arkansas to a road season-best score of 49.225 and the team’s first-ever victory in Tuscaloosa.

Snider earned National Association of Collegiate Gymnastics Coaches for Women South Central Regional Assistant Coach of the Year honors for her efforts in 2016.

Snider doesn’t limit her skills to the balance beam as was evident in 2014, when she guided Katherine Grable to the school’s first-ever NCAA Championship in both the vault and floor exercise.

A native of Verona, N.J., Snider (née Cortez) competed for the Razorbacks from 2005-08 and spent the 2009-11 seasons as Arkansas’ director of operations. As assistant coach, she is involved in recruiting, coaching and choreographing routines for the Razorbacks.

Snider is married to Razorback volunteer assistant coach Ryan Snider and the couple welcomed their first child this summer.