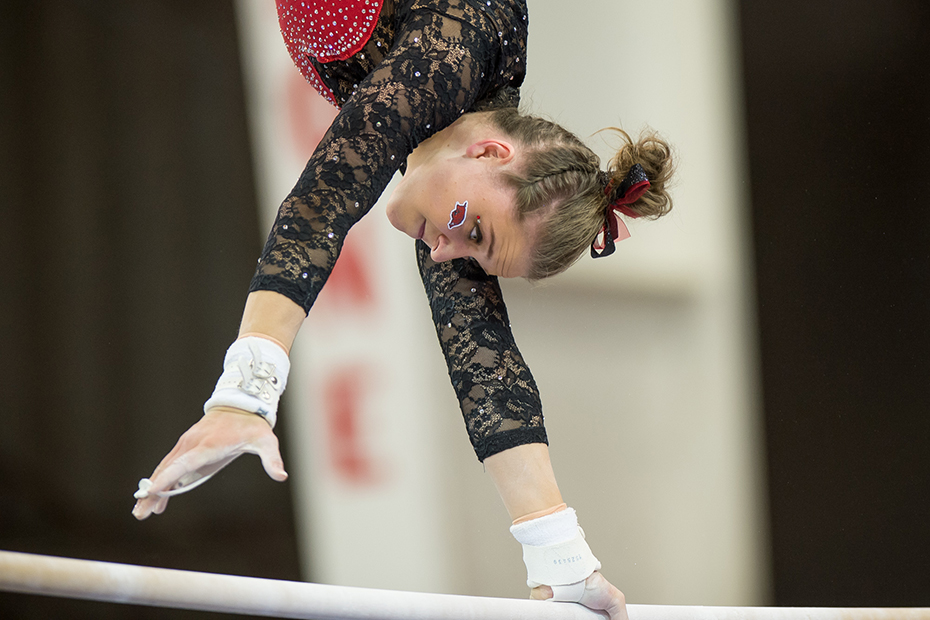 Sydney McGlone led the team on balance beam with a career-high 9.850, far surpassing her previous best of 9.775. Sydnie Dillard also posted a 9.850, her fourth score of that or better this season in seven meets. The team beam score of 49.100 was the sixth-consecutive meet in which Arkansas surpassed the 49.00 mark.

The Razorbacks’ best rotation of the night was on vault, where the visitors matched their season average and scored 49.125. Wellick scored her season high of 9.900 for the fifth time, while Paige Zaziski posted a 9.850.

To lead things off on uneven bars, Keara Glover posted a 9.775 for the fifth time this season as Arkansas finished with a team score of 49.075. Braie Speed notched a team-high 9.850 at the No. 5 spot in the lineup, while Erin Freier had a 9.825 – her third consecutive score of that or better.

GYMQUOTES
“We were doing well on two events, then the team got a little rattled after what happened on floor. But we fought back and posted a good score in spite of the team being upset. I was really proud of the way we fought through adversity tonight.” — Head coach Mark Cook

“It felt awesome to finally put a beam routine together like how I train, especially when there was a lot of pressure to do well. Now I can go into next week with confidence in my gymnastics knowing I can hit it in a time like tonight.” — Freshman Sydney McGlone

UP NEXT
Arkansas will face off against Big Ten opponent Maryland on Friday, Feb. 19 at 6:30 p.m. CT. It will be the Razorbacks’ first-ever trip to College Park to face the Terrapins; the meet will be steamed on Big Ten Network +.