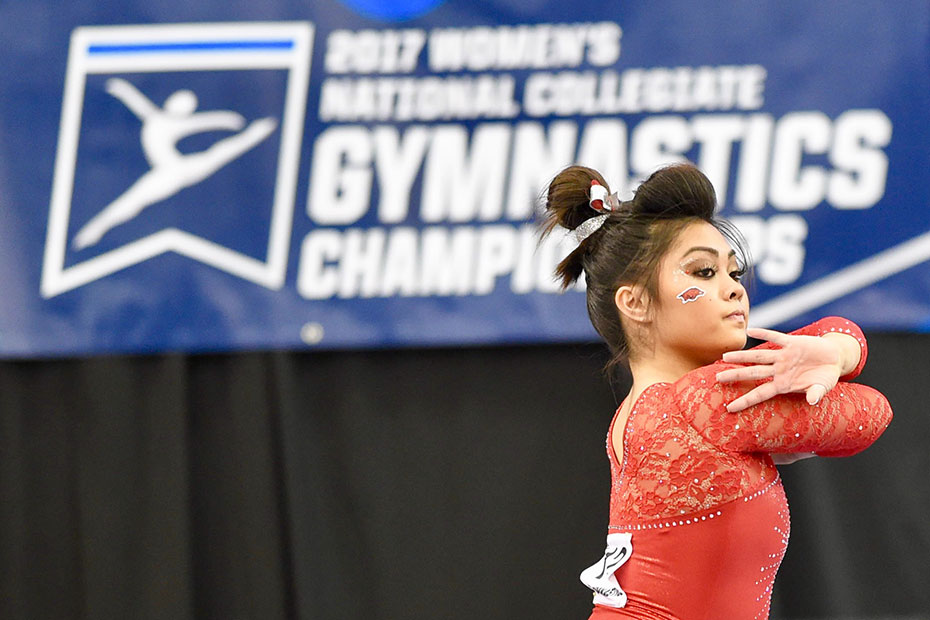 FAYETTEVILLE, Ark. – The Arkansas gymnastics team finished tied for third place at the NCAA Regional on Saturday evening with a team season-high score of 196.600. The top-two teams from the six-team regional — Utah (197.150) and Denver (197.050) — will move on to the NCAA Championship in St. Louis on April 14-16.

Yamzon was the second-highest all-arounder who was not on an advancing team. Among all competitors, she finished sixth with a score of 39.175. Speed tied for first-place in the vault with four other competitors — Denelle Pedrick from Central Michigan, Rachel Fielitz from Denver and MyKayla Skinner from Utah.

“I couldn’t be more proud of this team,” head coach Mark Cook said. “This team fought through a lot of adversity this season, and with all of the young talent we have, their outstanding performance tonight earned them a lot of invaluable experience.”

To kick off the event on balance beam, freshman Michaela Burton earned a 9.875 equaling her personal-best mark set against Auburn on Feb. 3. The score is also tied for the fourth-best mark on beam this season.

Arkansas’ score of 49.075 on balance beam is the fourth-highest team score in the event, topping the previous mark of 49.050 set against Centenary and SJSU on March 10.

The team’s 49.225 on floor is tied for the second-best team performance in the event, equaling the mark set against LSU on Feb. 10.

Moving on to vault, Arkansas was led by junior Braie Speed whose 9.900 was the San Antonio, Texas, native’s new career-best score, as well as tying individual season-high marks set by teammates McGlone and Amanda Wellick on Jan. 13 and Jan. 7, respectively.

Freshman Kirby Rathjen also shined in the event, earning a new career-best 9.800, topping her previous marks of 9.775 earned against LSU and Florida on Feb. 3 and Feb. 10. Senior Heather Elswick’s 9.825 equaled her season-best performance earned against SJSU and Centenary on March 10.

The Razorbacks rounded off the event with a 49.175, a new team season-high mark, surpassing the previous record of 49.000 gained against LSU on Feb. 10.

Arkansas rounded off the last event with a 49.125 on uneven bars, led by Garner and Burton, who each earned a 9.900. Garner has scored the three highest individual scores in uneven bars this season for the Gymbacks, and her 9.900 in the NCAA Regionals tied a similar score earned on Feb. 10 against No. 2 LSU.

“To make Nationals is super awesome,” Speed said. “Of course, I wish it was the team that made it instead of me individually, but I’m glad to be able to wear a Hog on my chest to represent the school somehow in St. Louis.” – Junior Braie Speed

“This season has been great, it’s all been a great experience and I’m glad I have the opportunity to compete at Nationals. I’m so excited to represent the best school.” – Freshman Jessica Yamzon