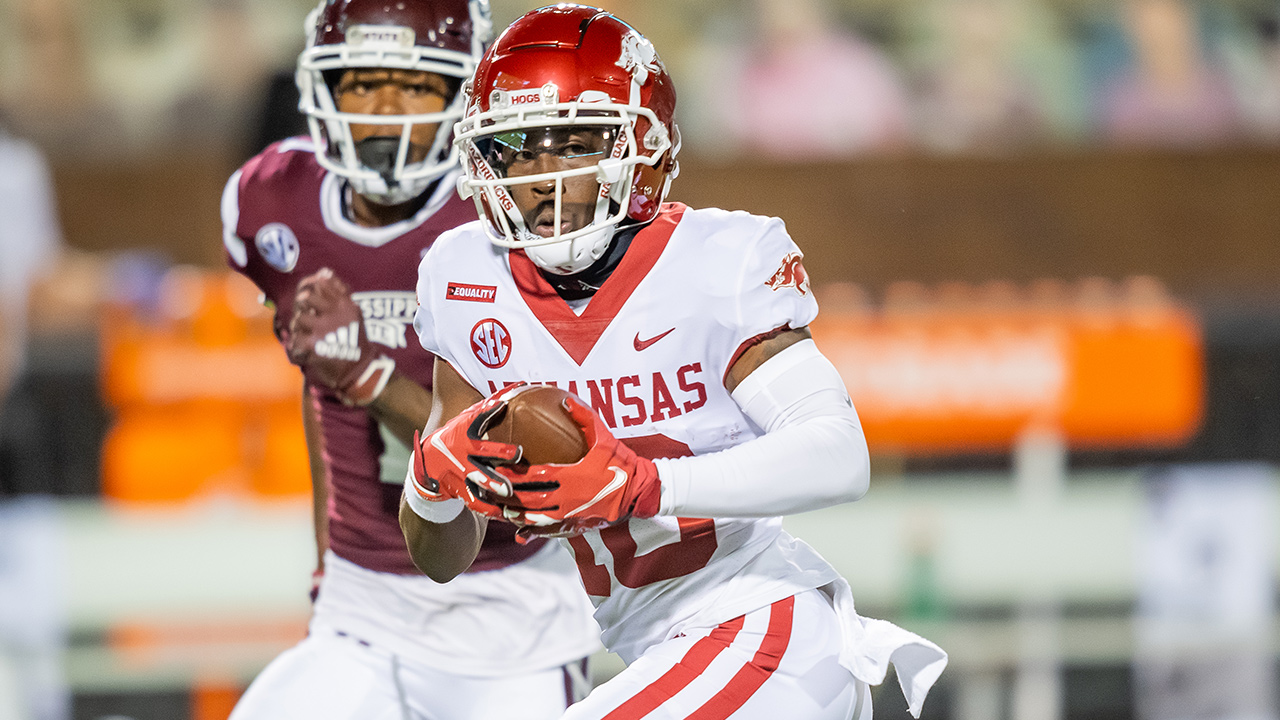 It has been zero days since our last SEC win. pic.twitter.com/SJ1yCeYNyq

2. – Junior LB Bumper Pool spearheaded the defensive effort against Mississippi State by registering 20 tackles, which set this season’s FBS single-game high and tied the program record for 10th most stops in a game. He was honored as the first Razorback SEC Co-Defensive Player of the Week winner since 2014, and the program’s first Bronko Nagurski National Defensive Player of the Week recipient since 2010. He became one of just nine SEC players to reach the single-game 20 tackle mark in the last 10 years and the first Hog since Jerry Franklin (2010) against Mississippi State. The Lucas, Texas product also chipped in two pass breakups on Saturday to become the only Razorback to record at least 20 tackles and two passes broken up in the same game.

3. – Junior S Joe Foucha turned in a career performance by intercepting two passes and making two tackles with a half tackle for loss and joined teammate Bumper Pool in garnering SEC Co-Defensive Player of the Week recognition. He picked off his first pass of the night in the second quarter and made a crucial interception in the fourth quarter at the Razorback 21-yard line and tacked on a 26-yard return. The New Orleans, La. native became the first Hog to pick off two passes in a game since Dre Greenlaw against Texas A&M in 2018. He’s also the first Razorback to record two interceptions with at least 0.5 tackles for loss since Michael Grant in 2006 vs. ULM.

4. – After the season’s first two weeks, the Razorback defense boasts the nation’s top two tacklers playing in the middle. Pool leads the nation averaging 15.5 tackles per game, and his 31 total stops sit atop the SEC, while redshirt senior LB Grant Morgan is second in the country averaging 14.0 tackles per game.

5. – Arkansas has already intercepted four passes in its first two games, which leads the SEC and ranks 10th nationally, after picking off six passes in 12 games last year. Sophomore NB Greg Brooks Jr. became the first Razorback since Santos Ramirez in 2016 to record a pick six when he intercepted Mississippi State QB K.J. Costello on the Bulldogs’ opening drive for a 69-yard touchdown return. Dating back to last season’s finale against Missouri, Brooks Jr. has made an interception in two of his last three games.

6. – Senior WR De’Vion Warren posted a career-high 100 receiving yards on four receptions and scored his second career touchdown with a 19-yard snatch against No. 16 Mississippi State. He also recorded a career-long 52-yard reception in the second quarter. Arkansas now has two 100+ yard receiving games this season, one each from Warren and sophomore WR Treylon Burks (102 yards vs. Georgia), which is one more than all of last season.

10. – No. 13 Auburn split its first two contests of the season, claiming the season-opener over Kentucky, 29-13, before falling in the Deep South’s Oldest Rivalry at No. 4 Georgia, 27-6. Last week, the Tigers’ offense was outgained by 226 yards (442-216) and mustered 39 rushing yards. Auburn is under the leadership of eighth-year head coach Gus Malzahn, who is a Fort Smith native, and was a walk-on receiver for the Razorbacks in 1984 and 1985. He coached high school football in the Natural State before becoming Arkansas’ offensive coordinator in 2006.