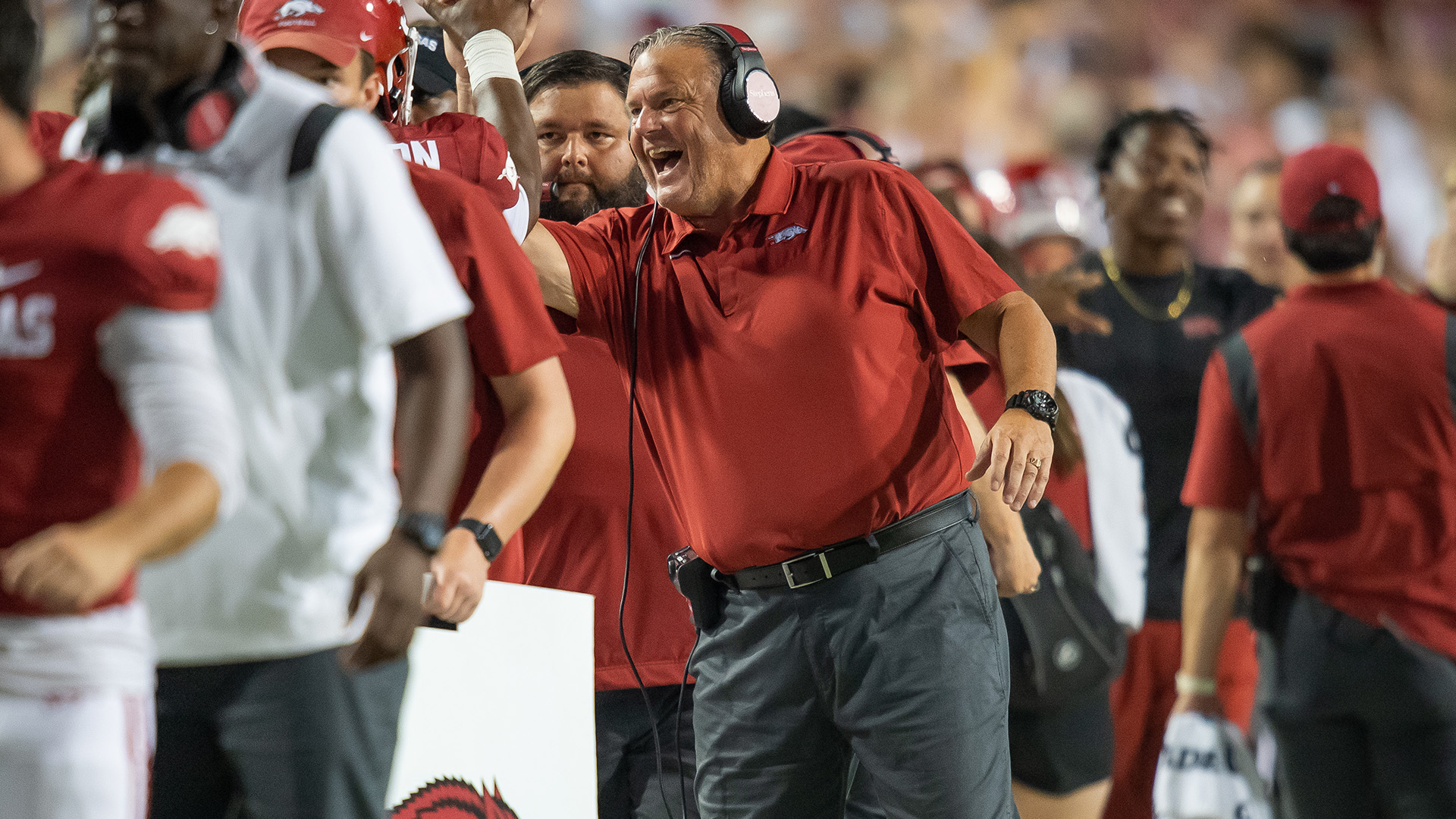 2. – After the win, the Razorbacks entered the national polls for the first time since 2016. The AP placed the Hogs at No. 20 in its poll and the coaches’ poll tabbed the team to a No. 24 ranking.

3. – The Razorback rushing attack ran roughshod over the Texas defense, rushing for 333 yards and four touchdowns. It was a balanced ground attack with five different ball carriers posting over 40 yards (Trelon Smith – 75 yards, 1 TD, KJ Jefferson – 73 yards, A.J. Green – 67 yards, 1 TD, Raheim Sanders – 50 yards, 1 TD and Dominque Johnson – 44 yards, 1 TD). The Hogs averaged 7.1 yards per carry, which included the final drive that covered 75 yards on eight plays – all on the ground. Arkansas rushed for over 330 yards in a game for the first time totaling 359 at Mississippi State on Nov. 19, 2016. Through two games, the Hogs’ average of 289 rushing yards per game ranks ninth nationally and third in the SEC. The offense has scored eight of its nine touchdowns this year on the ground, tied for fifth nationally in rushing scores.

6. – Redshirt senior linebacker and native Arkansan Hayden Henry turned in a career performance, logging a career-best 15 tackles with 2.5 tackles for loss. He teamed up with linebacker Grant Morgan to make a crucial stop behind the line of scrimmage on fourth down in the third quarter. For the first time in his career, he was named SEC Defensive Player of the Week and Walter Camp National Defensive Player of the Week.

7. – Defensive coordinator Barry Odom’s unit has been a turnover forcing machine since arriving on campus last season. The defense intercepted Rice quarterback Wiley Green three times in the season opener on a pick from defensive back Montaric Brown and defensive back Jalen Catalon’s pair of interceptions. In the first 12 games of Odom’s tenure as DC, Arkansas has recorded 16 interceptions, tied for fourth-most in the country since the 2020 season.

8. – Kicking for just the second time in his collegiate career, Cam Little was as steady as can be against the Longhorns, drilling four field goals and four extra points. He was honored with SEC Freshman of the Week accolades and named a Lou Groza Award Star of the Week. Little is the first Arkansas kicker to make four field goals in a game since Connor Limpert in 2018 against Ole Miss and first freshman kicker since Alex Tejada against Troy in 2007. Little is also the first Razorback kicker to make at least four field goals and four extra points in the same game since Tejada in the game against Troy.

Football Guys of the Week

9. – The Razorbacks are wrapping up a three-game homestand at DWRRS to open their season. It has been quite some time since Arkansas played its first three games of a season in Fayetteville, 88 years in fact. The 1933 also team did so defeating the College of the Ozarks (40-0), Oklahoma Baptist (42-7) and TCU 13-0, outscoring its opposition by a combined 95-7. Head coach Fred Thompson’s Hogs finished the year 7-3-1 and 4-1 in the Southwest Conference. Interestingly, Arkansas won its first game in program history over Texas that year, 20-6, on Nov. 24 in Austin.

10. – Arkansas and Georgia Southern are meeting for the first time on the gridiron, and the Hogs are 20-1 all-time against the current alignment of the Sun Belt Conference. The Eagles are 1-1 this season, defeating Gardner-Webb, 30-25, and falling at Florida Atlantic, 38-6. Head coach Chad Lunsford is 28-19 in Statesboro and is coming off an 8-5 season with a victory over Louisiana Tech in the R+L Carriers New Orleans Bowl.