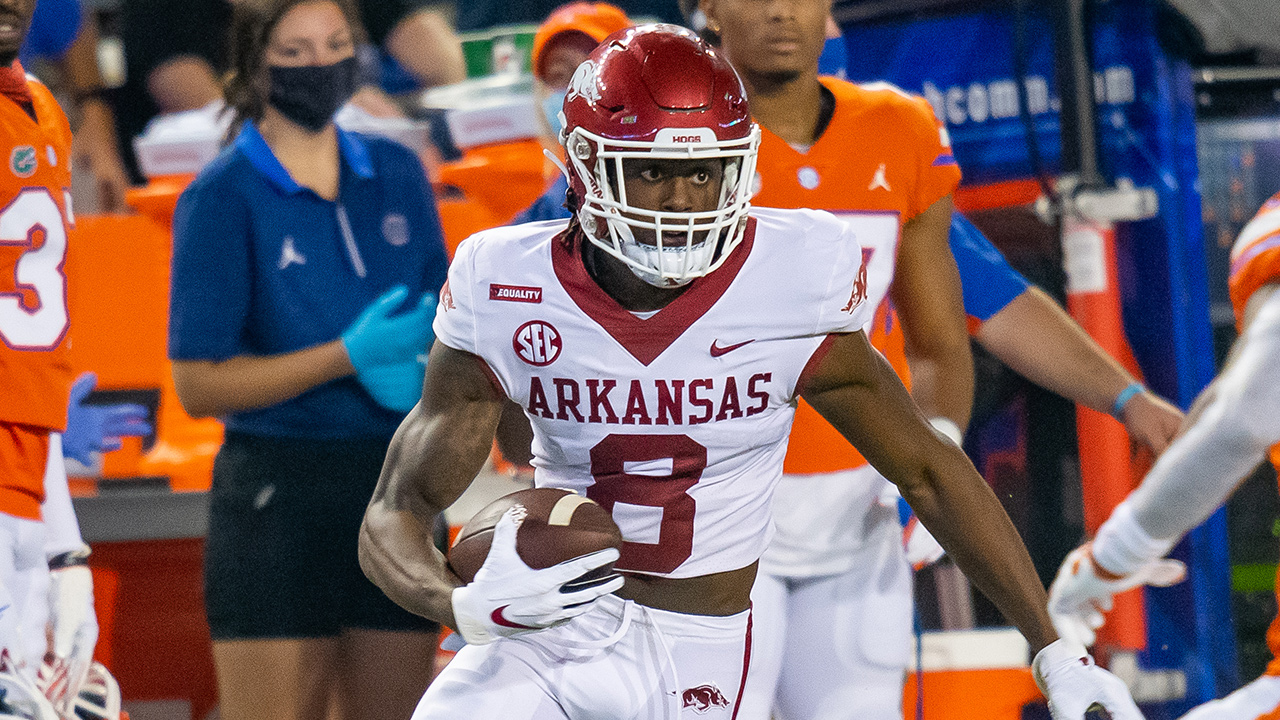 Arkansas hosts LSU in Fayetteville for just the sixth time in the all-time series at 11 a.m. on Saturday, Nov. 21. The game will be broadcast live by SEC Network.

1. – Arkansas scored a season-high 35 points last weekend at No. 6 Florida but fell to the Gators in The Swamp, 63-35. The Razorbacks offense registered over 400 yards of total offense for the third straight game (458) and ran for their second-most rushing yards (208) of the season. Redshirt junior RB Trelon Smith had a run of 83 yards and junior WR Mike Woods made an 82-yard reception, it’s the first time an SEC team had an 80+ yard run and catch in the same game since Ole Miss in 2014.

2. – Junior WR Mike Woods tuned in a career performance against the Gators, registering a career-high 129 yards on two catches that both went for touchdowns. He made TD grabs of 47 and 82 yards, with the latter being the longest catch by a Razorback since Cobi Hamilton’s 80-yard grab against Rutgers in 2012. He is one of three FBS receivers this season to have two catches for over 100 yards and two scores in a game and is the first Hog since Andrew Davie in 2007 against Ole Miss to have two catches in a game that were both touchdowns. On his second reception, the junior eclipsed 1,000 career yards and has 413 receiving yards this season.

3. – Sophomore WR Treylon Burks is 17 yards away from 1,000 career receiving yards. If he accomplishes the feat against LSU in his 18th career game, he will tie Boo Williams (1999-00) as the fastest Hog receiver to 1,000 yards since 1997. The Warren, Ark. product leads the team and ranks seventh in the SEC with five receiving touchdowns while making 36 receptions for 508 yards. His average of 84.7 receiving yards per game is eighth in the SEC, and 5.7 catches per game are ninth.

4. – Arkansas redshirt senior QB Feleipe Franks made a return to Florida, the school where he began his career, and was 15-of-19 passing for 250 yards with two touchdowns and no interceptions. He set a career-high 224.2 quarterback rating and threw for his 16th touchdown of the year, the most at Arkansas since Austin Allen’s 25 touchdown tosses in 2016. He has completed 138-of-202 passes for 1,678 yards, ranking third in the SEC in touchdowns, fourth in passing yards and sixth in passing yards per game (239.7). Franks is the first Arkansas QB since 2000 to throw for 200 or more yards in each of the season’s first seven games and has thrown at least two touchdown TD passes in three straight games. The grad transfer’s 68.3-percent completion percentage is on pace to break the school’s single-season record (Kevin Scanlon, 1979, 66.2-percent).

Feleipe Franks with a dime in The Swamp to put Arkansas on the board 💪 pic.twitter.com/soPYKzaMsK

5. – When the SEC revamped the league’s schedule prior to the season, shifting to an all-league, 10-game slate, many thought the Razorbacks were dealt one of the most difficult schedules in college football history. That schedule has lived up to the billing with Arkansas entering this weekend as the only team in America to have faced four teams in this week’s AP Top 25 poll – No. 5 Texas A&M, No. 6 Florida, No. 13 Georgia and No. 23 Auburn. Three of those four games came away from Fayetteville and happen to be Arkansas’ only four losses. The Hogs are also the only team in the nation to have faced five teams that were ranked in the AP Top 25 at the time of the game. Head Coach Sam Pittman’s first win as the Head Hog came at No. 16 Mississippi State in Week 2 of the SEC schedule. Much like the Jelly of the Month Club, the Razorbacks’ schedule keeps on giving with No. 1 Alabama set to visit Donald W. Reynolds Razorback Stadium on Dec. 5.

7. – Redshirt freshman Jalen Catalon made 10 or more tackles in the first half for the second week in a row by totaling 12 stops at Florida. Catalon has posted four 10+ tackle performances and leads the team with 40 solo tackles while ranking third in total tackles (70). Since 2000, the defensive back’s 70 total tackles are the most by an SEC freshman through the season’s first seven games. Catalon is tied for the league-lead with three interceptions and is the first SEC freshman to have 70 or more tackles with at least three picks since Ole Miss’ Denzel Nkemdiche in 2012. Catalon is also the first Razorback freshman to have over 50 tackles in a season since Dre Greenlaw in 2015 (95).

8. – Redshirt senior LB Grant Morgan made a game-high 15 tackles against the Gators and improved his average to 12.1 tackles per game, tops in the SEC and sixth-best nationally. Morgan’s three 15+ tackle games are the most in a single-season at Arkansas since 2005 and the most in the SEC since 2015. Right behind Morgan in conference and national leaderboards is junior LB Bumper Pool, who is second in the SEC and seventh in the FBS, averaging 11.7 tackles per game.

10. – Since last playing at Auburn and losing 48-11 on Oct. 31, LSU (2-3, 2-3) had a postponement against No. 1 Alabama and a bye week, and is now in danger of losing its third straight game for the first time since 2015. The Tigers are scoring 35.8 points per game, the fourth-best mark in the SEC, but are allowing 33.6 points per game, which is 11th in the league. Junior Myles Brennan began the season as the starting quarterback but was injured at Missouri on Oct. 10 and is yet to return. Freshmen TJ Finley and Max Johnson have split time, with Finley throwing more passes of the two, completing 30-of-45 attempts for 408 yards with two touchdowns and three interceptions. Sophomore RB John Emery Jr.’s 246 rushing yards lead the team, and he has also scored two touchdowns. Junior WR Terrace Marshall Jr. paces the team with 540 receiving yards and nine touchdowns. Senior S JaCoby Stevens is the team’s leading tackler (36) and has made 2.5 sacks and recovered two fumble.