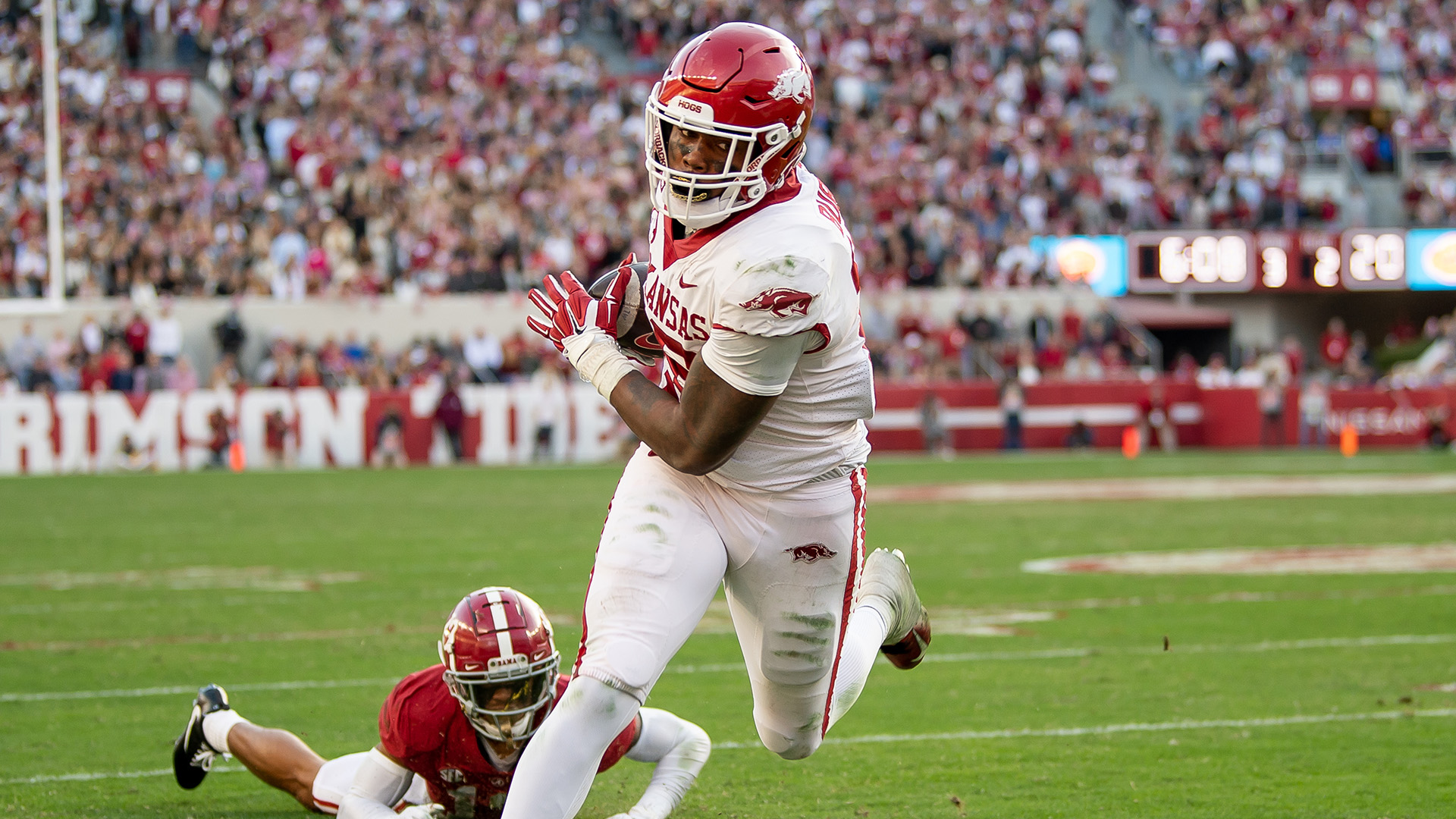 1. – Last week, Arkansas fell 42-35 at No. 2 Alabama to close out its road slate. The Razorbacks posted 468 total yards against the Crimson Tide, the most Alabama has allowed all season. Quarterback KJ Jefferson completed 22-of-30 passes for 326 yards and three touchdowns. It was the highest point total the Hogs posted against Alabama since 2007 (38).

2. – The Arkansas rushing attack is one of the best in the country this season, averaging 222.3 yards per game on the ground to rank second in the SEC and 14th nationally. Four ball carriers have each totaled over 400 rushing yards this year in running back Trelon Smith (555), quarterback KJ Jefferson (496) and running backs Dominique Johnson (479) and Raheim Sanders (478). Arkansas and Ole Miss are the only two teams in FBS that feature four 400-yard rushers this year. The last time the Hogs had four 400-yard rushers was 1975, Frank Broyles’ second to last season as head coach. Running backs Ike Forte (983), Jerry Eckwood (792) and Rolland Fuchs (618) and quarterback Scott Bull (533) led the way for a team that rushed for 320.3 yards per game, the single-season school record.

3. – Quarterback KJ Jefferson has thrown for 2,316 yards and ranks sixth in the SEC with 20 passing touchdowns this year. The redshirt sophomore is third in the SEC in average yards per completion (13.7) and fourth in yards per pass attempt (9.1). Jefferson has thrown a touchdown pass in six straight games, totaling 14 over that span with just one interception. Jefferson is one of only four signal callers in the country to throw 20 or more touchdown passes with three or fewer interceptions. Against the Crimson Tide, the Sardis, Miss. product totaled his third game of 300+ passing yards and three or more touchdown passes of the season, the most by a Razorback quarterback since Brandon Allen in 2015 (3 games).

QB KJ Jefferson is one of only four quarterbacks in the country this season with 20 or more touchdown passes (20) and three or fewer interceptions (3). pic.twitter.com/aaWze3xh02

5. – Arkansas is inside the AP Poll top 25 for the seventh time this season. With their No. 25 ranking, the Hogs have been ranked 424 times in school history since the poll first released in 1936, the 21st most appearances among all programs.

3️⃣ weeks in a row in the #CFBPlayoff rankings. pic.twitter.com/xaSIeQeJBF

6. – Linebacker Bumper Pool leads the team recording 107 stops. The senior ranks second in the SEC and 13th nationally averaging 10.0 tackles per game. Over the last three seasons (2019-21) his 302 tackles are second-most in FBS during that span, trailing only Troy’s Carlton Martial (361). The Lucas, Texas product has recorded 331 career tackles and is five away from tying Bert Zinamon (1980-83) for 10th most in a career in program history.

7. – The Hogs’ top three tackles are all senior linebackers in Pool, Grant Morgan and Hayden Henry. Morgan is right behind Pool with 89 tackles on the year and Henry is third on the team making 84 stops. Henry saved his best season on The Hill for last, totaling more tackles this year then his four prior seasons combined.

9. – Second-year head coach Sam Pittman is one of just 14 SEC coaches in history to take over a team with a losing record and lead it to a top 10 spot in the AP Poll in their first two seasons. The Razorbacks were ranked eighth in the fifth release of this year’s AP Poll. Pittman and Houston Nutt (1998) are the only Razorback head coaches to accomplish the feat. Pittman’s SEC-only record is 6-11 through 17 games, in the four seasons prior to his arrival, Arkansas was 4-28 (32 games) in conference play.

10. – The Razorbacks are 3-9 all-time against Missouri and looking to win against the Tigers for the first time since 2015. Arkansas lost 50-48 last year in a game that went down to the wire and saw Jefferson burst onto the scene with 274 passing yards and three touchdowns. Arkansas is 2-0 this year in trophy games against Texas A&M and LSU and is looking to defeat all three opponents in the same season for the first time in program history.