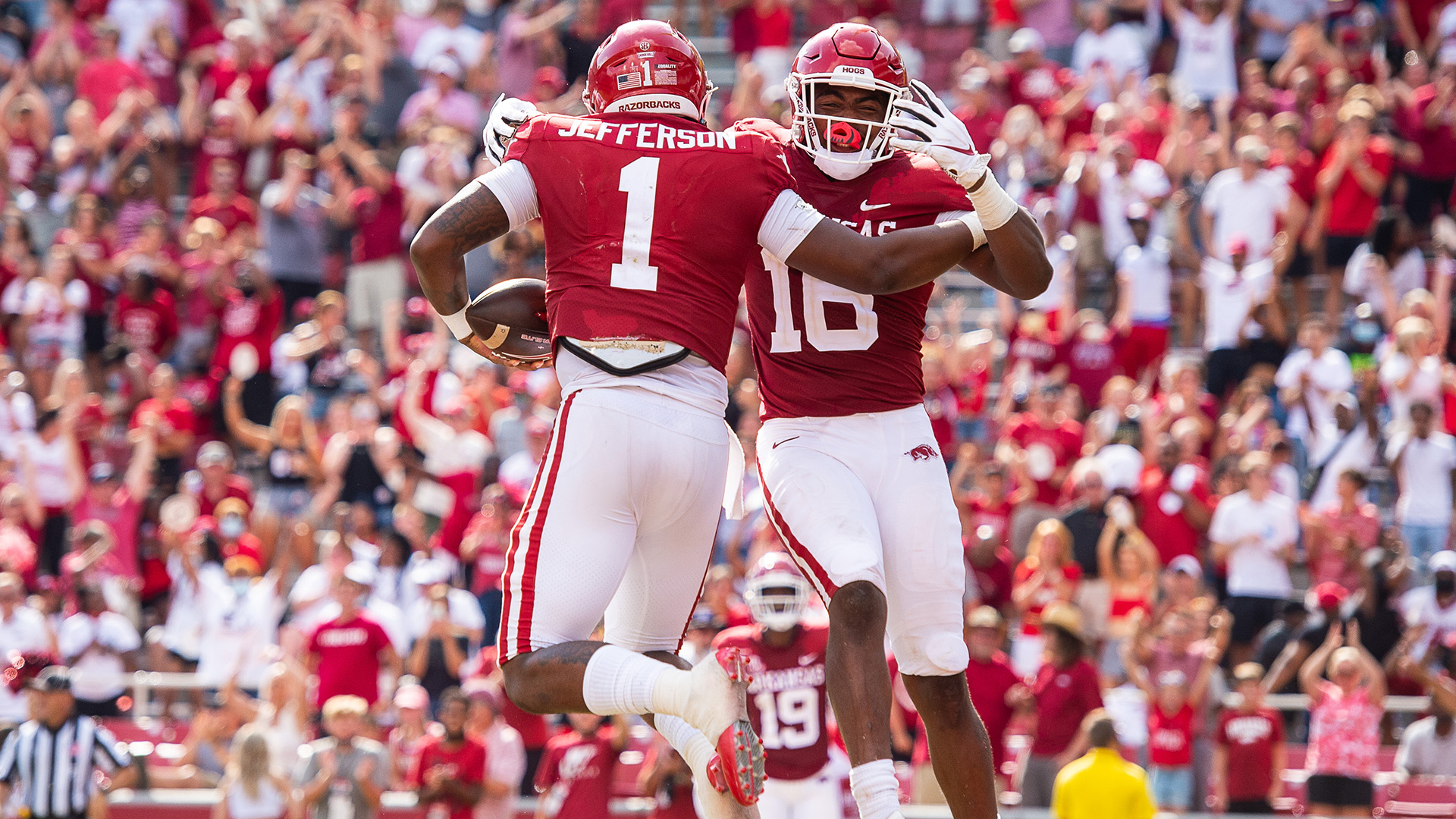 For the second week in a row, Arkansas plays host to a former Southwest Conference rival as Texas makes the trip to Donald W. Reynolds Razorback Stadium for a 6 p.m. kick on Saturday, Sept. 11.

1. – Behind a 31-point second half outburst, the Razorbacks overcame a 10-point third quarter deficit, defeating Rice 38-17, to open the season last weekend. Arkansas had not scored 31 points in the second half since a 52-6 throttling of Mississippi State on Nov. 22, 2003. Against the Owls, the Hogs scored 10 points in the third quarter and 21 in the fourth stanza.

2. – AP Preseason All-American defensive back Jalen Catalon lived up to the billing against Rice, posting 11 total tackles with 1.0 tackle for loss while recording his first career two interception game. Both picks were crucial to the outcome as Arkansas’ offense turned them into 14 points. With interception returns of 39 and 44 yards, the redshirt sophomore was able to show his quickness and totaled 83 interception return yards, the most by a Razorback since Rohan Gaines’ 100 yards on Nov. 22, 2014, against Ole Miss. Catalon is the only player in the country to total at least 10 tackles and two picks in a game this season.

3. – For the 10th time in his career, linebacker Bumper Pool led the team in tackles, recording 14 stops against the Owls. In addition, his 1.5 tackles for loss were a game high. Over the last three seasons (2019-21), the senior has logged 209 total tackles, tied for the fourth most nationally over that span. Due to a targeting penalty called in the second half, Pool will miss the first half of the Texas game.

4. – Arkansas’ defense impressed against Rice, especially against the run as the Owls accrued just 81 yards on 39 carries for a paltry 2.1 yards per carry. The Razorbacks had not held an FBS opponent to 2.1 yards per carry or fewer on at least 39 carries since shutting out Troy, 23-0, on Nov. 2, 2002 (95 yards, 50 carries, 1.9 ypc). Rice registered only one rushing first down, which tied for second fewest allowed in Arkansas’ record book. Florida only picked up one rushing first down and ran for just 12 yards in a 31-10 Hogs win on Nov. 5, 2016. The school record was set on Sept. 20, 1947, when the Razorbacks held Northwestern (La.) State to zero rushing first downs.

5. – Defensive coordinator Barry Odom’s unit has been a turnover forcing machine since arriving on campus last season. The defense incepted Rice quarterback Wiley Green three times last weekend on a pick from defensive back Montaric Brown and Catalon’s pair of interceptions. In the first 11 games of Odom’s tenure as DC, Arkansas has recorded 16 interceptions, which ranks tied for fourth in the country in total picks since the 2020 season.

RB Trelon Smith has recorded his third career 100+ yard rushing game, crossing the mark on his 22nd carry of the day. pic.twitter.com/JEWOgKbeBf

9. – The Razorbacks are in the midst of a three-game homestand at DWRRS to open their season. It has been quite some time since Arkansas played its first three games of a season in Fayetteville, 88 years in fact. The 1933 team did so defeating the College of the Ozarks 40-0, Oklahoma Baptist 42-7 and TCU 13-0, outscoring its opposition a combined, 95-7. Head coach Fred Thompson’s Hogs finished the year 7-3-1 and 4-1 in the Southwest Conference. Interestingly, Arkansas won its first game in program history over Texas that year, 20-6, on Nov. 24 in Austin.