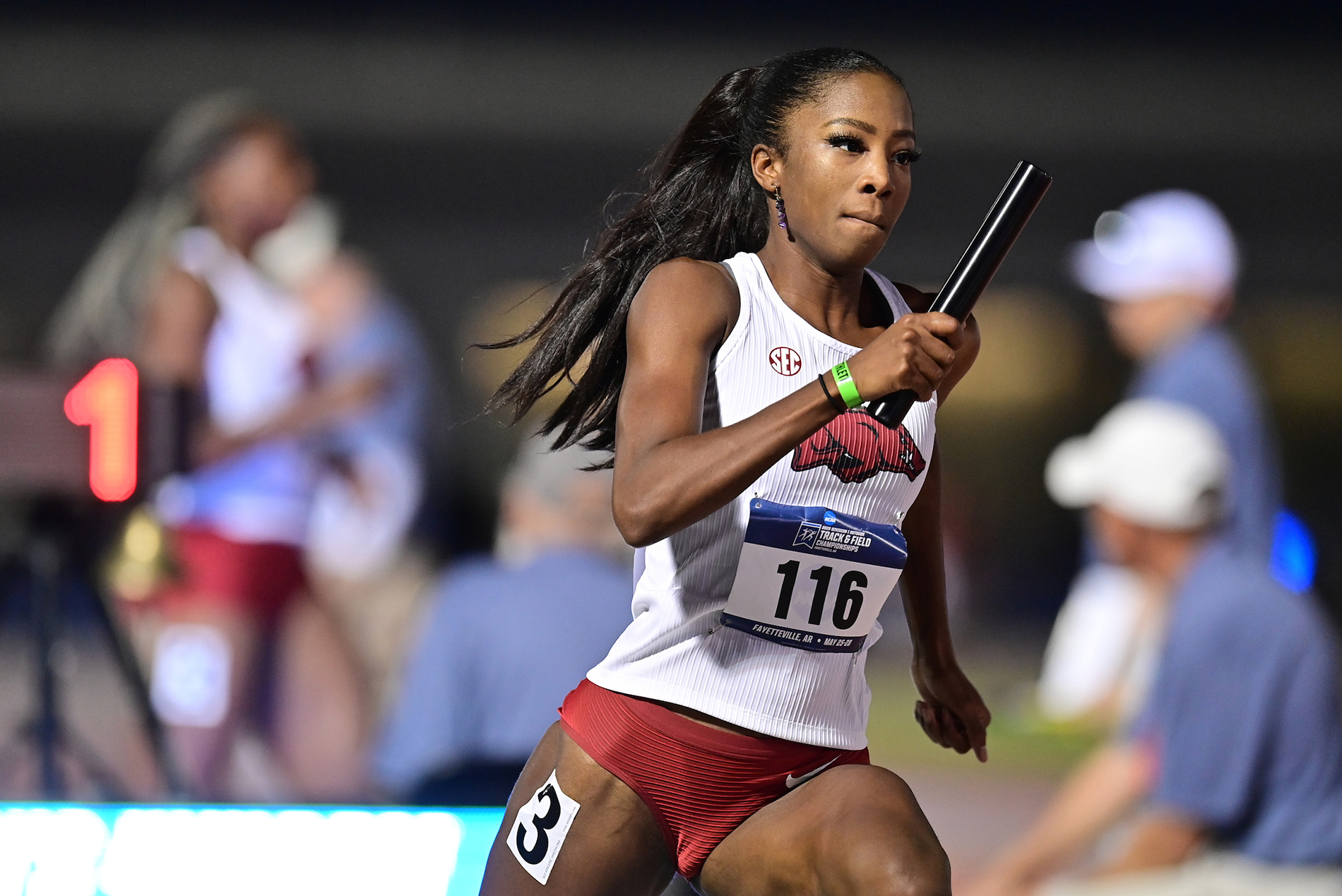 FAYETTEVILLE – Arkansas turned the final day of the NCAA West Preliminary Rounds into their own NCAA Selection celebration as the Razorbacks added 10 entries to their tally of athletes heading to Eugene for the NCAA Championships.

A crowd of 1,420 at John McDonnell Field on Saturday were treated in seeing nine Arkansas athletes advance in eight more events, with five qualifying in a pair of events.

The Razorbacks total heading to the NCAA Championships at Hayward Field will include 12 athletes in 10 events for 14 entries.

“We’re super excited about what we could possibly do in Eugene,” stated Arkansas women’s head coach Lance Harter. “It was a great weekend for us, and we’ve got a lot of possibilities to score.

“This is a meet that is always scary to any coaching staff, because any time the gun goes off there is a possibility of different things that could happen. We went through this meet basically unblemished.”

The time by the Razorbacks is also the fastest ever recorded in the Preliminary Round history – in either the East or West regions.

Burks-Magee started in the blocks, splitting 52.4 and had a stride lead over USC at the first exchange. Then Effiong blistered a 50.5 second leg to give Arkansas over a one-and-a-half second edge on the Trojans. Baylark covered the third leg in 52.50 as the lead grew to almost two full seconds.

Wilson rocked the anchor leg in 49.72 seconds, three full seconds ahead of USC’s anchor, to win the section in commanding fashion.

“Morgan is really starting to show her maturity and poise as a racer,” said Harter. “She comes out of the hole and gets us in the front. Then we ran by ourselves after that. Rosey and Jada did a fantastic job. With Britton being that far ahead, what are you going to do for an encore, just run as solid as you can.”

The day started with Krissy Gear finishing second in the opening heat of the 1,500m in 4:18.97 behind a 4:18.93 by Colorado’s Micaela Degenero. Then Yoveinny Mota sped to a career best of 12.87 (1.8 wind) as runner-up in her heat to move to No. 4 on the UA all-time list and improve her Venezuelan national record.

“One highlight was Yoveinny having a great hurdle race with a legal mark, that was exceptional,” noted Harter. “Krissy Gear showed she can finish with anybody in the 1,500m and that was a great start to the day.”

Lauren Gregory added the 5,000m to her 10,000m qualification from Thursday. She will be one of four who advanced in both distance races from the NCAA West. Joining Gregory were Colorado’s Emily Covert along with New Mexico’s tandem of Amelia Mazza-Downie and Emma Heckel.