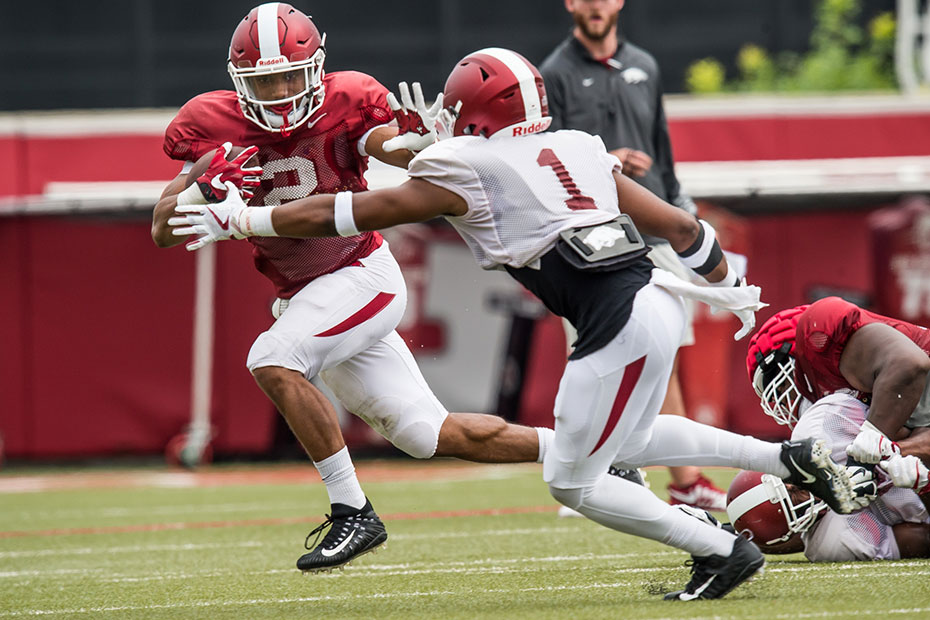 5 Storylines From The First 5 Practices

FAYETTEVILLE, Ark. – The pads went on for the first time Tuesday, and Arkansas turned up the intensity, going through an upbeat and energetic 23-period practice at the Fred W. Smith Football Center.

With five practices in the books and 24 to go, here’s a look at five top storylines so far:

1. Wide Receivers Making A Case
Tasked with replacing several veterans responsible for the bulk of the Razorbacks’ production through the air a year ago, sophomores La’Michael Pettway, Deon Stewart and T.J. Hammonds, redshirt freshman Jordan Jones and junior college transfer Jonathan Nance have been an impressive bunch. Pettway started the week off strong Monday with a nice touchdown grab in a team period and followed up with an impressive score Tuesday during red-zone work. Jones has shown that he has a second gear and can really stretch the field, hauling in multiple deep-ball TDs through five practices. Wide receivers coach Michael Smith especially praised Nance on Tuesday, saying the Gulfport, Mississippi, product has been “lights out.” Smith added that he’s been impressed with Nance’s speed, ability to play all receiver positions and knowledge of the playbook.

2. Speed
When head coach Bret Bielema recently asked his senior leadership committee what they thought of this year’s freshman class, the consensus answer was speed.

“All together at once, they said ‘They’re fast.’” Bielema told the media on Monday. “I think that jumped out to them, and I think it jumped out to us.”

Among the young players who’ve turned heads so far are running back Chase Hayden, who’s worked his way up to third on the depth chart, wide receiver Koilan Jackson and defensive backs Chevin Calloway, Jordon Curtis and Kamren Curl.

3. Williams Fitting In Nicely
A newcomer, but no stranger to SEC football, graduate transfer tailback David Williams has fit in nicely since his arrival on The Hill, according to Bielema. Williams has primarily run with the two’s through the first five practices, but has also split some first-team reps with sophomore Devwah Whaley.

“He hasn’t missed a beat, and his teammates have been really impressed with his demeanor,” Bielema said.

Bielema also noted that he intends to use multiple backs this season.

“Running back is about staying fresh, and that’s why a lot of times in our system, it’s not just two backs … we use three,” Bielema said. “Those three guys kind of all bring a different bag of tricks.”

4. Defense Looks To Be A Force
The defense has undoubtedly been active and aggressive, making big plays and forcing timely turnovers. Sophomore defensive end McTelvin Agim has been disruptive, tallying a couple of would-be sacks, while sophomore linebacker De’Jon Harris has made several big plays against both the run and pass, including an interception Saturday during a team period.

The most experienced and arguably the deepest unit on the defensive side is the secondary. A group that features captains junior Santos Ramirez and senior Kevin Richardson II, along with seniors Josh Liddell, Henre’ Toliver and DeAndre Coley, members of the secondary have consistently flashed their ball-hawking abilities.

5. Next Chapter of #TEU
With Hunter Henry and Jeremy Sprinkle finding NFL homes each of the last two years, the Razorbacks will rely on a youthful group to turn the page and carry on its #TEU legacy. Sophomores Austin Cantrell, Cheyenne O’Grady, Grayson Gunter and Will Gragg, as well as junior Jack Kraus and newcomer Jeremy Patton, the No. 1 tight end in junior college in 2016, have each been heavily involved as both pass catchers and in-line blockers and will be counted on this season to continue the program’s history of elite play at the position.

Up Next
The Hogs are set to return to the practice field Wednesday afternoon.