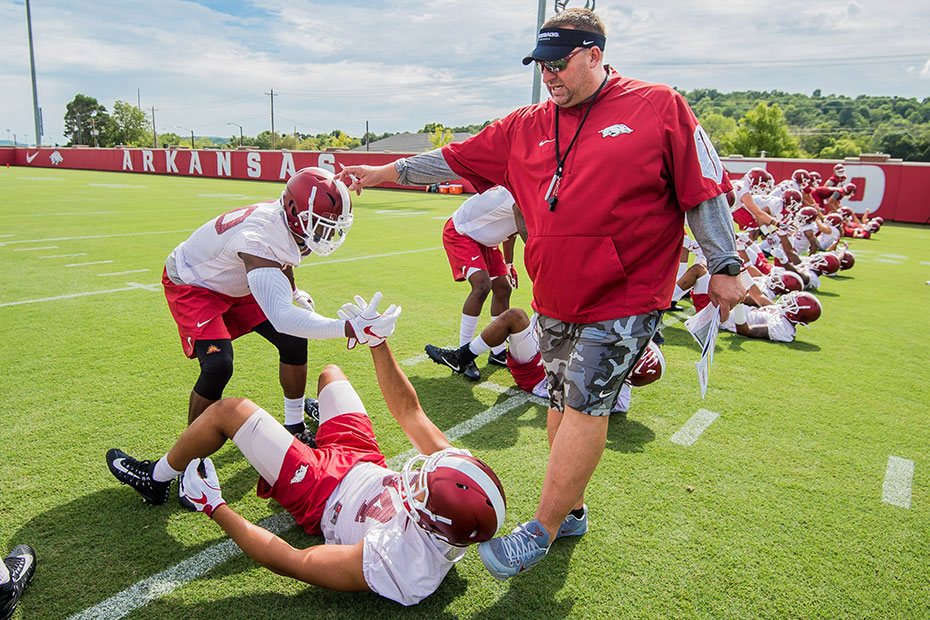 6 Storylines From The First Camp Practice

Here’s a few notes and key storylines from Practice 1:

At A Glance
The Razorbacks kicked things off at 4:10 p.m., at the Fred W. Smith Football Center outdoor practice fields and went through a 24-period workout, which included two water breaks, in helmets and shorts.

Following individual drills, the Hogs went through multiple periods of 7-on-7 with an emphasis on 1st-and-10.

There was one position change of note. Redshirt freshman Dylan Hays was working out at defensive tackle instead of on the offensive line. Bielema told the media following practice that he and the staff have been impressed with Hays ever since he arrived on campus. The move will allow Hays, a native of Little Rock, to see time on the field more and give redshirt freshman Jonathan Marshall the opportunity to get reps at both defensive tackle and end.

#ProHog Hunter Henry was in attendance before heading to Los Angeles Chargers training camp, which begins July 30 in Costa Mesa, California. Henry is entering his second season after leading all NFL tight ends with eight touchdown catches and earning a spot on the PFWA All-Rookie team last season.

Safety First
In an effort to reduce impacts of practice hits, multiple players on the offensive and defensive lines wore padded helmet covers.

“It’s an added layer of protection for big guys who get continual reps,” Bielema said following practice. “And I think it’s something that’s really positive.”

SEC’s Top Returning QB
Austin Allen, who led the Southeastern Conference in total passing yardage last season, is back for his senior campaign and second season as the starting signal caller. Allen took the reins at QB from his older brother Brandon a year ago and immediately made his mark. He led the SEC with 3,430 passing yards, including a league-best 2,291 in conference play and finished with 25 touchdown passes, which ranked second in the conference.

One of Allen’s top targets will be senior Jared Cornelius, the veteran of the receiving corps.  Highlighted by three straight 100-plus yard receiving performances, Cornelius recorded 32 receptions for 515 yards and four touchdown catches, while adding a rushing score, in 2016.

Whaley Ready to Carry the Load
After backing up regular-season rushing champion Rawleigh Williams III last season, sophomore Devwah Whaley will be counted on for more carries in 2017 and looks to become the featured running back in the Razorbacks’ offensive attack.

Whaley, who came to Fayetteville from Beaumont, Texas, as one of the top backs in the country, ranked as a four-star prospect and No. 3 at his position, rushed for 602 yards and three touchdowns on 110 carries 13 games played last season.

A Doak Walker Award candidate, Whaley will have the opportunity to become the latest member of Bielema’s elite 1000-yard rushing club. Bielema is well experienced in producing 1,000-yard rushers. In fact, he’s the only active FBS head coach with a 1,000-yard rusher in each of the last 11 seasons (2006-present).

Anchor of the Line
Senior All-American center Frank Ragnow will lead the offensive line for the second straight season.

Ragnow was college football’s best offensive lineman in 2016, according to Pro Football Focus. This year, he’ll look to repeat that. He’s a candidate for the Rimington, Outland and Wuerffel trophies and boasts spots on several preseason All-America teams, including earning first-team honors from Athlon Sports and Lindy’s Sports as well as second-team status from Sporting News and Phil Steele.

Earlier this month at SEC Media Days, Bielema had high praise for his star lineman.

“He might be the best I’ve ever coached,” Bielema said. “Not just at the center position, at the offensive line position.”

Defensively, Arkansas returns 23 letterwinners, including five starters. Led by captains Santos Ramirez and Kevin Richardson II, the secondary is arguably the most veteran unit on the roster having combined for 57 starts heading into this season.

Rhoads’ defense also includes Butkus Award candidate linebacker Dre Greenlaw, a freshman All-American in 2015 who played only seven games due to injury last year, and cornerback Ryan Pulley, who tallied the second-most pass breakups in the SEC in 2016.

Up Next
Arkansas is scheduled to be back on the practice field for another 4:10 p.m. workout on Friday.