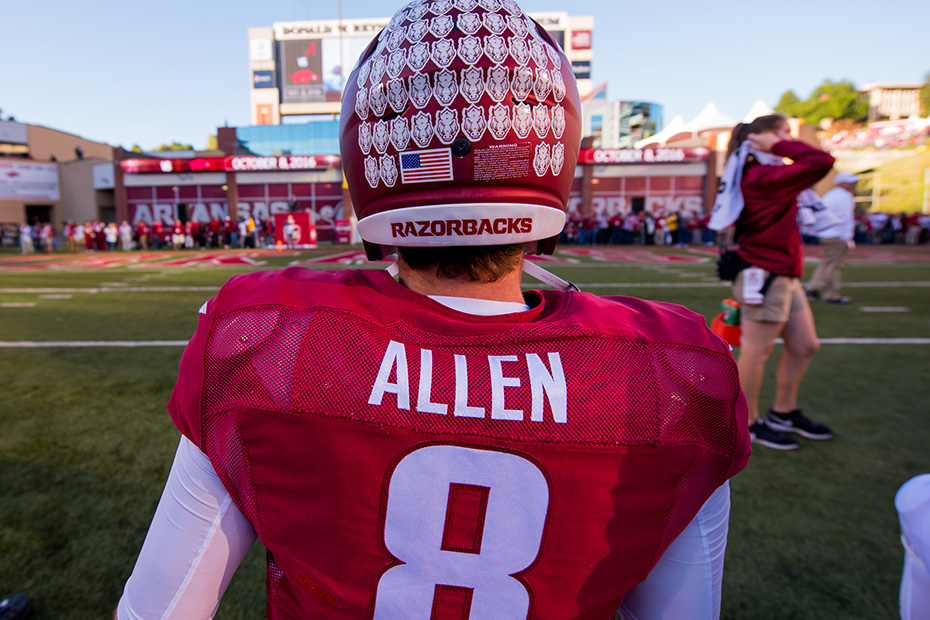 NEW ORLEANS – The Southeastern Conference’s leader in touchdown passes, Arkansas junior quarterback Austin Allen is one of 10 midseason additions to the 2016 watch list for the Manning Award, which is given annually to the nation’s top quarterback, the Allstate Sugar Bowl announced Wednesday.

Allen, a native of Fayetteville, Arkansas, has completed 63.6 percent of his passes (119 of 187) for 1,632 yards and 15 touchdowns this season. His 1,632 passing yards rank second in the SEC and 18th in the FBS, while his 15 touchdown passes are tied for ninth nationally, and the most in school history through the first six games of a season. Allen also ranks second in the SEC in passer rating (158.1) and third in both passing yards per game (272.0) and yards per attempt (8.7).

Allen is the first quarterback in school history and one of just five in the SEC since 2000 to throw multiple scoring tosses in each of the first six games of a season, joining Kenny Hill (Texas A&M, 2014), Tyler Bray (Tennessee, 2012), Andre Woodson (Kentucky, 2007) and Rex Grossman (Florida, 2001). Allen is one of only two quarterbacks in the FBS with six multi-TD pass games this season. Of Allen’s 15 touchdown passes, 12 have come inside the red zone to lead the SEC and tie for second in the FBS. He ranks third in the FBS in percentage of red zone passing attempts that have resulted in a touchdown (36.3) among quarterbacks with at least 30 red zone passing attempts.

The first-year starting signal caller has posted five consecutive games of 200-plus passing yards, including 371 against then-No. 10 Texas A&M and a career-high 400 against No. 1 Alabama. He is just the fourth quarterback in school history to pass for 400 or more yards in a single game and one of five in the FBS since 2007 to do so against the Crimson Tide. Against SEC opponents, Allen ranks third in the conference with 771 passing yards and is tops with a per-game average of 385.5.

The Manning Award was created by the Allstate Sugar Bowl in honor of the college football accomplishments of Archie, Peyton and Eli Manning. It is the only quarterback award that includes the candidates’ bowl performances in its balloting.

Ten finalists will be determined by a selected panel of national media covering college football, as well as each of the Manning’s. That list will be released on Dec. 2 and the winner is scheduled to be announced following the College Football Playoff National Championship game on Jan. 11, 2017.