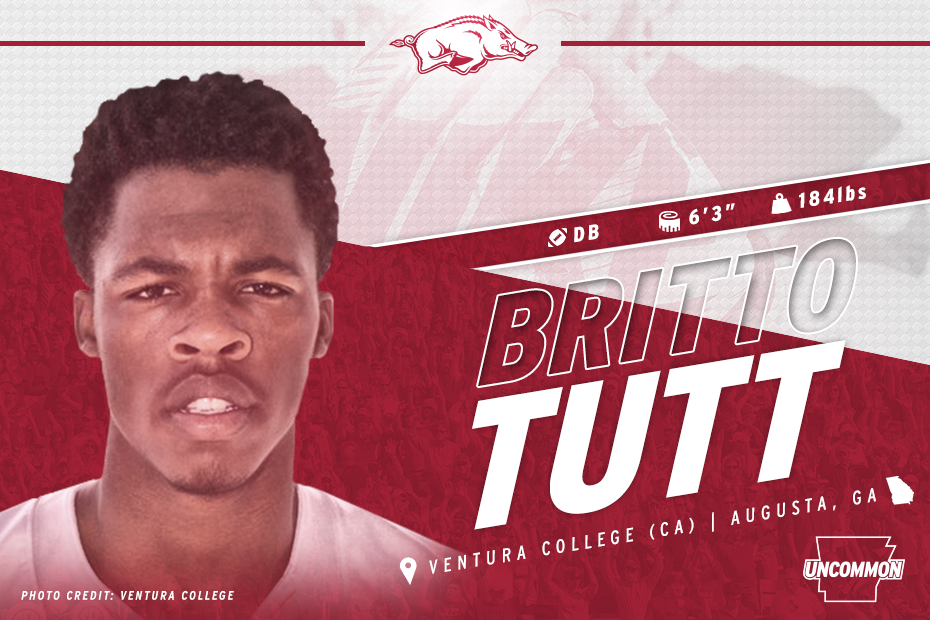 Arkansas Adds Defensive Back To 2016 Class

FAYETTEVILLE, Ark. – Arkansas head coach Bret Bielema has announced the addition of Ventura College (Calif.) defensive back Britto Tutt to the 2016 signing class. Tutt, who signed a National Letter of Intent (NLI) on Wednesday, will join the Razorbacks this summer and have three years of eligibility.

“We are very excited to add Britto to our 2016 class,” said Bielema. “He’ll have an immediate impact for us starting in the summer and has three years of eligibility. He has a lot of experience as an offensive and defensive player, but we’ll sign him as a corner. He also has the ability to be a punt returner and kick returner.”

A native of Augusta, Ga., Tutt helped Ventura College finish 8-3 as co-champions of the National Northern Conference by hauling in a team-best four interceptions to go along with 40 tackles under head coach Steve Mooshagian. An All-Northern Conference first team selection, Tutt returned one interceptions and one fumble recovery for a touchdown, while also registering six pass breakups. The 6-foot-3 corner collected all four of his interceptions over a three-game stretch in the middle of the season while he closed the year with at least six tackles in three of the last four contests.

As a senior at Richmond Academy (Ga.) in 2014, Tutt exceled on both sides of the ball, racking up over 1,000 all-purpose yards on offense, while leading the team with five interceptions. Tutt scored a touchdown four different ways, returning an interception and kickoff for a score, while also finding the end zone twice on the ground and seven times through the air. He finished the season with 40 receptions for 697 yards and seven TDs, while turning 37 carries into 300 yards and two scores for an 8.1 yards per carry average.

Tutt is the fifth player from the 2015 Ventura College team to sign a Division I NLI since the end of the season. He is the 21st member of Arkansas’ 2016 class.