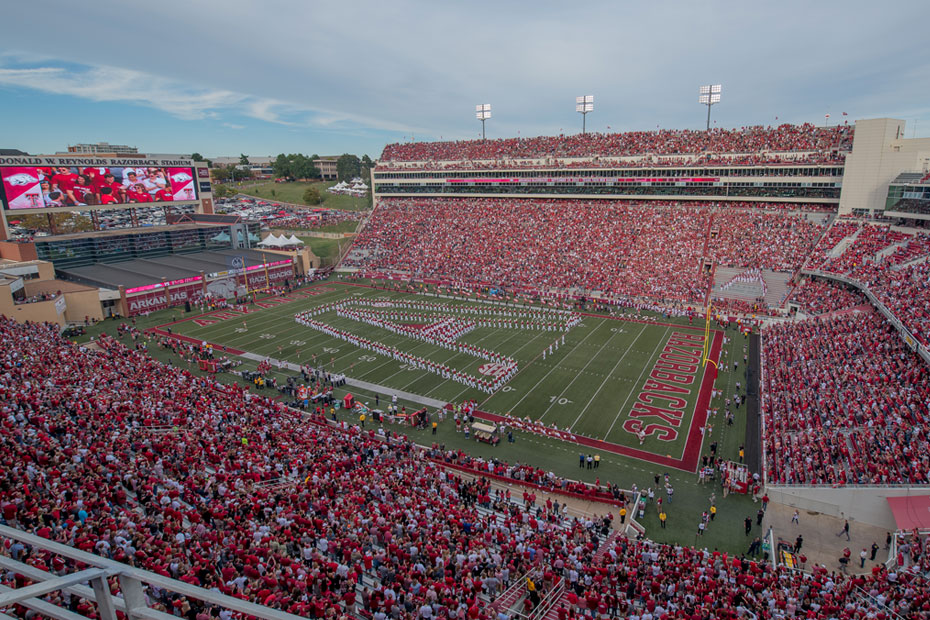 After 35 days, the Razorbacks will finally return to the state of Arkansas as they host Auburn on Saturday at Donald W. Reynolds Razorback Stadium. Arkansas is the final SEC team to play their conference home opener and won’t play another SEC home game until Nov. 21 when Mississippi State comes to town.

The Series
Arkansas and Auburn will meet for the 25th time on Saturday. The relatively new series began in 1984 with a non-conference game played in Memphis. That was the only meeting between the two teams until Arkansas joined the SEC in 1992 and the teams have played each other every year since then. Auburn holds the overall series mark, 13-10-1.

The Razorbacks have won two of the past three home meetings, with all three coming against a top 25 Auburn squad. Arkansas posted a 44-23 win in 2009 over the No. 17 Tigers and won again in 2011 with a 38-14 victory against the 15th-ranked Tigers.

The Opponent
Auburn thrives on the hurry-up, no huddle offense that head coach Gus Malzahn has made a staple of his coaching career. The best comparison to a team Arkansas has already played would probably be Tennessee, who employs many of the same hurry up tactics. The Razorbacks did a nice job defensively against the Volunteers, holding them to a season-low 20 points in Knoxville.

On defense, Auburn is adjusting to Will Muschamp, the unit’s new defensive coordinator. Auburn is allowing one point less per game than they did last year, but the unit hasn’t gelled yet, at least not as well as Muschamp’s defenses at his previous stops, Florida and Texas.

Connections
The Auburn coaching staff has several connections with Arkansas, most notably running backs coach Tim Horton. He was a four-year lettermen at Arkansas as a wide receiver and punt returner from 1986-89 and was a team captain for the 1989 Southwest Conference champions. He later coached for the Razorbacks from 2007-12.

Auburn head coach Gus Malzahn grew up in Fort Smith, Ark. and was a walk-on wide receiver for the Razorbacks in the 1980s. He was the head coach at several Arkansas high schools before he became the Razorbacks’ offensive coordinator in 2006.

Auburn offensive coordinator Rhett Lashlee played at Arkansas from 2002-04 but did not letter. He coached with Arkansas defensive line coach Rory Segrest at Samford in 2011.

Speaking of Segrest, he was a graduate assistant at Auburn from 1997-98.

Arkansas does have one player from the state of Alabama. Junior defensive end JaMichael Winston is from Pritchard, Ala.

Auburn offensive line coach J.B. Grimes is from Clarendon, Ark. He was a graduate assistant for the Razorbacks from 1981-82 and an assistant coach from 1989-92.

News & Notes
– Saturday will mark 35 days between home games for the Razorbacks.
– Arkansas’ four losses have come to #19 Toledo, Texas Tech, #16 Texas A&M and #8 Alabama
– Those four teams have combined to post a 22-4 record with the four losses coming to #2 Baylor, #4 TCU, #8 Alabama and #24 Ole Miss.
– The Razorback defense is holding opponents to 13.7 points per game less than their opponents’ season average.
– Arkansas has limited three of its six opponents to their lowest scoring outputs of the season.
– Brandon Allen (813), Alex Collins (231) and Drew Morgan (247) each rank second in the SEC at their respective positions in yards gained against ranked teams this season.
– For the third consecutive season, Arkansas is leading the SEC in fewest sacks allowed.
– The Razorbacks are one of just eight teams nationally that have allowed five sacks or fewer this season.