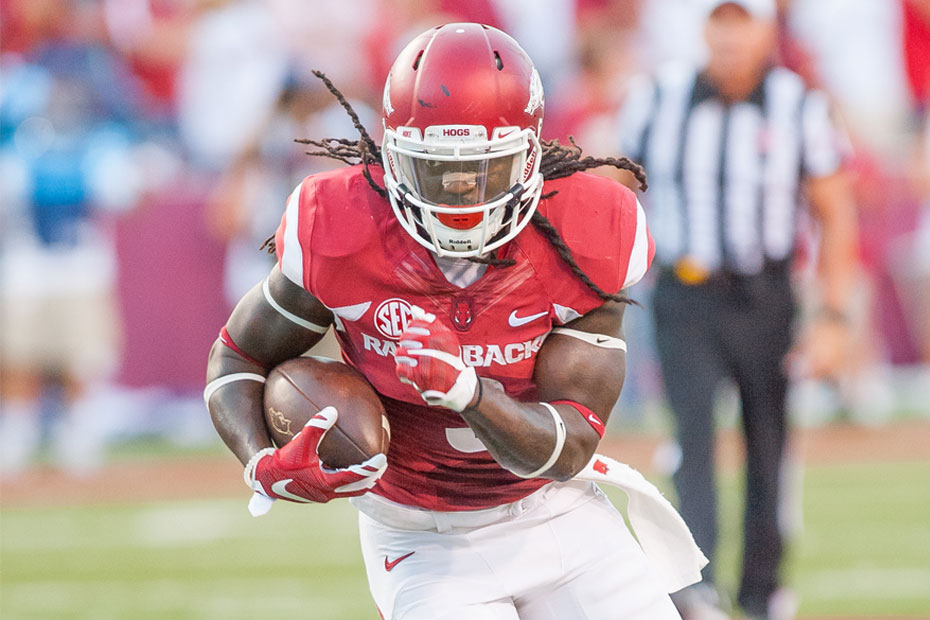 Arkansas To Face Off Against Tennessee

Arkansas makes its first trip to Knoxville since 2007 on Saturday, when the Razorbacks face off against the Tennessee Volunteers at 6 p.m. on ESPN2.

The Series
Arkansas and Tennessee will meet for the 18th time on Saturday. In the last meeting, the Razorbacks won handily, defeating the Volunteers 49-7 in 2011. This will be Arkansas’ first trip to Knoxville since 2007 when they fell to the 22nd-ranked Volunteers.

The Razorbacks have one just once in seven trips to Knoxville. Ironically, it was Arkansas’ first trip there in 1992, when current tight ends coach and then-quarterback Barry Lunney Jr. led the Razorbacks to a 25-24 upset over No. 4 Tennessee. It was Lunney Jr.’s first career start at quarterback.

The Opponent
Tennessee has a lot of similarities to Arkansas through the first four games of the season. For starters, the Volunteers are 2-2 with close losses in both games. They have given up double-digit fourth-quarter leads in both contests to quality opponents.

The Volunteers have also been riddled with injuries. They have lost several key contributors, most notably LB/DE Curt Maggitt. The All-SEC honoree led the team with 11 sacks last year and is an emotional leader for the Tennessee defense.

Offensively, Tennessee is led by do-it-all quarterback Joshua Dobbs. And take do-it-all literally. Last week at Florida, Dobbs led the team in passing, rushing AND receiving – all in the same game.

Connections
The Razorbacks have three players from the state of Tennessee – all juniors. Punter Toby Baker and defensive linemen Cordale Boyd and Brandon Lewis are all from Memphis.

Zach Azzanni, Tennessee’s wide receivers coach, served in the same capacity at Wisconsin in 2012 on Bret Bielema’s staff there.

News & Notes
– Last week, Arkansas had a 150-yard rusher (A. Collins, 151) and a 150-yard receiver (D. Morgan, 155) in the same game for the fifth time in school history.
– Drew Morgan is tied for second in the SEC and 18th nationally with 10 receptions of 15+ yards.
– Arkansas leads the SEC with two sacks allowed and is one of just 11 teams nationally to allow two sacks or less this year.
– The Razorbacks have had 12 different players catch a pass this year, including 11 with multiple receptions.
– Brandon Allen became the seventh player in school history last week to throw for 5,000 career yards.
– Saturday will mark Allen’s 26th consecutive start at quarterback, tying Ryan Mallett for the most consecutive starts at QB since Arkansas joined the SEC in 1992.
– Hunter Henry leads all SEC tight ends with 17 receptions and 206 receiving yards.