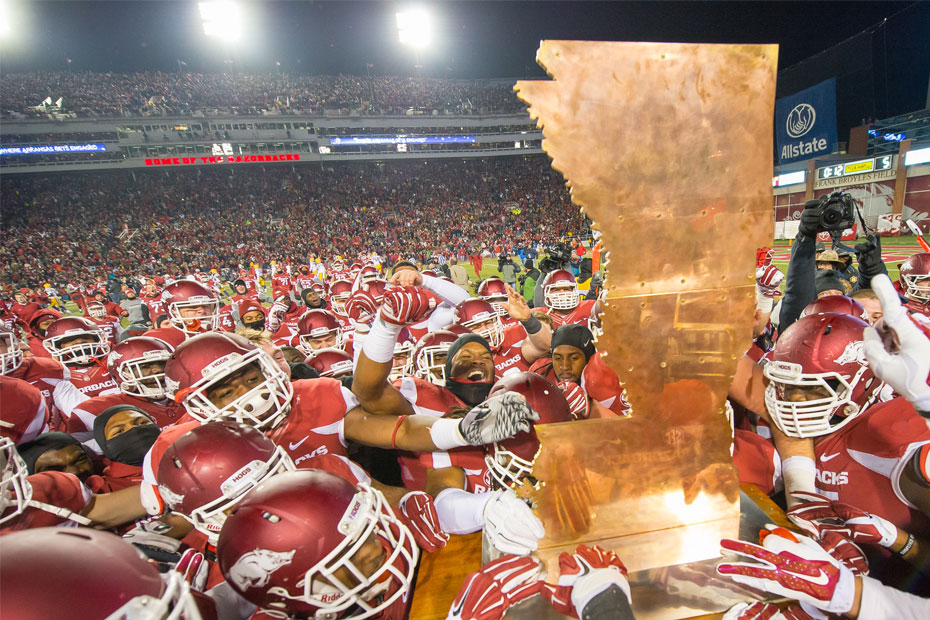 Arkansas Wraps Up Road Schedule At No. 9 LSU

Arkansas will play its final true road game of the 2015 season and look to keep the Golden Boot on Saturday evening in Baton Rouge, La. This marks the Razorbacks’ fifth SEC game away from home this season and a win would make Arkansas bowl eligible for the second consecutive year.

The Series
Saturday marks the 61st meeting in the long-time rivalry with LSU holding a 37-21-2 advantage. The two programs used to meet in Shreveport regularly, playing all but one season there between 1913 and 1936. There were a few games played in the 1950s and 1960s before Arkansas joined the SEC in 1992 and the two have played every season since then.

Arkansas and LSU used to meet in the final game of the regular season in the afternoon on Black Friday. That changed when the SEC expanded to 14 teams. As a result, this will be only the second time Arkansas has ever played a night game in Baton Rouge.

The Battle for the Boot began in 1996 when the nearly 200-pound Golden Boot was awarded. Arkansas currently holds the trophy after shutting out LSU, 17-0, last year in Fayetteville.

The Opponent
LSU is 7-1 and ranked No. 9 in the nation. They were No. 2 in the initial College Football Playoff poll until they lost their first game of the season last weekend at Alabama. The Tigers’ offense revolves around No. 7, sophomore running back Leonard Fournette. The New Orleans native has rushed for 1,383 yards and 16 touchdowns this season, averaging more than seven yards per carry. He is considered one of the favorites to win this year’s Heisman Trophy.

Ironically, it is the Razorback defense that has limited Fournette to his lowest career rushing output. As a true freshman last year, Fournette managed to gain just nine yards on the ground in Arkansas’ 17-0 shutout victory.

The LSU defense is stout and contains several future NFL prospects. The Tigers rank in the top 25 in both rushing defense and total defense but are giving up nearly six points per game more than they did in 2014.

News & Notes
– The Razorbacks have scored 50-plus points in three straight games for the first time since 1916.
– Alex Collins is just the third running back in SEC history to begin his career with three straight 1,000 yard seasons, joining Georgia’s Herschel Walker and Razorback great Darren McFadden.
– Quarterback Brandon Allen has led Arkansas to scores on 15 of his past 20 possessions under center, including 14 touchdown drives.
– The Razorbacks haven’t gone three-and-out with Allen under center in 23 straight drives.
– Over his past nine quarters of regulation action, Allen is 59-of-81 for 825 yards, 10 touchdowns and non interceptions.
– Brandon Allen is just eight touchdown passes away from breaking the school record for career touchdown passes set by Ryan Mallett.
– Tight end Hunter Henry is just one reception away from 100 for his career. He would become the 13th tight end in SEC history to join the 100-reception club.
– Wide receiver Drew Morgan leads the SEC with nine touchdown receptions.