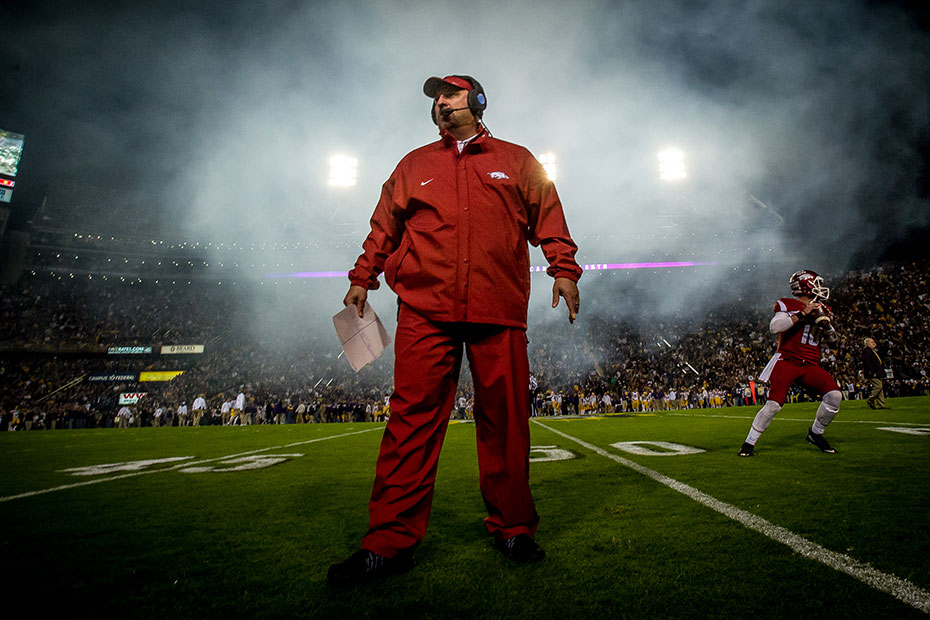 FAYETTEVILLE, Ark. – Just a few hours after landing a 20-player signing class ranked in the top 25 nationally, Arkansas head coach Bret Bielema announced the addition of five preferred walk-ons that will join the team in the summer. These five players are part of Arkansas’ incoming 2016 class.

HIGH SCHOOL
Finished senior season with 102 tackles, including three sacks, six pass breakups and two forced fumbles … Helped lead Benton HS to a 9-3 record and the 6A state semifinals under head coach Scott Neathery … As a junior, helped lead the Panthers to a 12-1-1 record and the 6A state championship … Named to the 2015 Farm Bureau Awards watch list … Participated in the 2015 Dallas Nike Combine in Arlington, Texas, posting an 88.59 rating with a 29.9 vertical, 4.43 shuttle and 37 power ball … As a junior, collected 73 tackles, including 15 for loss, two interceptions … Also had six fumble recoveries, including two returned for touchdowns … Has been clocked at 4.65 in the 40-yard dash … Has a 305 pound bench press and 420 squat … Also played baseball for Benton HS.

HIGH SCHOOL
Ranked the No. 32 prospect in the state of Arkansas and the No. 169 offensive tackle in the class by 247Sports … Started at offensive tackle for Maumelle HS during his senior season under head coach David Farr … As a junior, helped Maumelle to a 10-1-1 record and the second round of the 5A state playoffs … Part of an offensive line that allowed the Hornets to total 31 touchdowns … Helped pave the way for a backfield that rushed for 1,397 yards while averaging 116.4 yards per game … Has a 325 pound bench press and 370 squat.

HIGH SCHOOL
Ranked the No. 35 kicker in the class by ESPN with a grade of 73 … A four-year letterwinnner at Allen HS under head coach Tom Westerberg … As a senior, earned All-County first team special teams honors, was named to the All-District 6A second team and was selected as a Kohl’s High School All-American honorable mention … Helped the Eagles to a 14-1 record and the Texas 6A D1 state semifinals … Made 84 of 87 PAT attempts for a conversion rate of 96.55 … Booted through 19 of 24 field goals with a long of 48 … As a junior, converted seven of seven PAT attempts … Made 28 of 31 PAT attempts and one of four field goal attempts as a sophomore … In his freshman season, made 36 of 43 PAT attempts and three of four field goals.

HIGH SCHOOL
Tabbed the No. 22 player in the state of Arkansas and the No. 71 inside linebacker in the class by 247Sports … A three-year letterwinner at Greenwood HS … Named the 2015 Arkansas Democrat-Gazette Defensive Player of the Year, Southwest Times Record Player of the Year and earned Arkansas Democrat-Gazette All-Prep honors as a senior … Selected to the All-Arkansas Varsity first team defense … Finished the season with 132 tackles, including 25 for loss, three sacks, four pass deflections and two fumble recoveries … Also had 11 receptions for 283 yards and five touchdowns … Helped Greenwood HS to a 12-1 record and the 6A state championship where he tallied 13 tackles … Earned All-State honors as a junior … Logged 80 tackles, including 10 for loss, one sack, three interceptions and three fumble recoveries … Also caught six passes for 122 yards and two touchdowns, helping the Bulldogs to a 7-5 record and the second round of the 6A state playoffs … As a sophomore, registered 88 tackles, including 17 for loss, two quarterback hurries, two forced fumbles, three interceptions and one pass breakup … Also had 16 receptions for 202 yards and six touchdowns … Coached by head coach Rick Jones … Younger brother of current Arkansas wide receiver Drew Morgan.