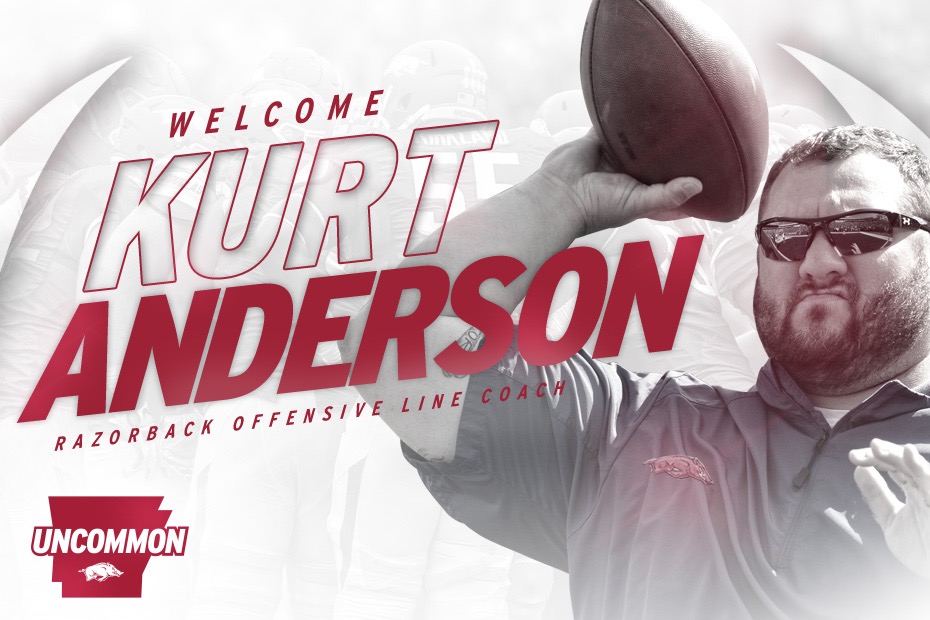 “Once this position on our staff opened up I heard from a lot of NCAA and NFL coaches who were interested,” said Bielema. “Kurt stood out to me when he interviewed and he’s stood out to every coach he’s worked and played for. His ability to relate to the players and connect with them will help him have a tremendous impact on our program, not only a position coach, but as a recruiter. I’m very happy to have him joining our staff and helping us pursue our goals at the University of Arkansas.”

“I couldn’t be more excited for my family and I to join the Arkansas family,” said Anderson. “It’s an unbelievable opportunity to be part of such a storied program with great tradition, in the SEC and in a community that is perfect for my family. I believe strongly in what Coach Bielema is building and the way he’s building it and can’t wait to get to work. I know my approach and philosophies will blend well with his and it’ll be fun to see what can be accomplished.

“I’m so thankful to (Buffalo Bills) head coach Rex Ryan and the Bills organization for everything they have done for me during my time in Western New York,” Anderson continued. “It was a difficult decision to leave a community that has been so good to me and my family and that is so passionate about the Bills. During my visit to Arkansas, I got the same passionate feeling about the Razorbacks and I can’t wait for my family to be part of it. I know my family is excited because ‘Hog Calls’ have already started in our house.”

This past season, the Bills led the NFL in rush yards per game (152.0) and yards per rush (4.8), and were fifth in the AFC in total offense (360.9). Anderson served as the team’s primary offensive line coach for the first six weeks of the season, the organization’s first under head coach Rex Ryan. Center Eric Wood and left guard Richie Incognito both earned Pro Bowl alternate status anchoring the NFL’s 12th-youngest offensive line while paving the way for Pro Bowl running back LeSean McCoy. McCoy was one of three Buffalo players to rush for 500-plus yards this season, marking the first time that feat has been accomplished by the Bills since 1962.

“I’ve been around a lot of great coaches and Kurt is one of them,” said Ryan, who just completed his first season as the head coach of the Buffalo Bills. “Kurt can coach anywhere in the country and at any level. He’s smart, loyal, tough and players will love to play for him. He’s a guy that gives you his word and you can take it to the bank. I’m proud to have coached with him and the Arkansas offensive linemen are to lucky to have him. I know how big of a hire this is for coach Bielema and I can promise he got the right guy.”

A native of Chicago, Anderson joined Eastern Michigan after a two-year stint at his alma mater Michigan. While on staff with the Wolverines, Anderson spent the 2007 campaign as a graduate assistant coach for the offensive line, helping develop All-America tackle and the overall No. 1 pick in the 2006 NFL Draft Jake Long. In 2006, Anderson was the defensive quality control assistant coach. He helped develop current NFL players Lamar Woodley and Alan Branch.

Prior to his stint at Michigan, Anderson was an assistant coach at Indiana State where he worked with the offensive tackles and tight ends.

A standout along the offensive line at the University of Michigan, Anderson graduated in 2001 with a degree in sport management and communications from the Division of Kinesiology. Anderson was a two-year letterwinner (2000-01) as the starting center and received the Hugh R. Rader Jr. Memorial Award as the team’s top offensive lineman and was selected All-Big Ten honorable mention following the 2001 season. As a player and coach, Anderson has been involved in seven bowl games, highlighted by Michigan’s 1998 Rose Bowl win that sealed the program’s national championship.

What They’re Saying About Kurt Anderson
“I’ve been around a lot of great coaches and Kurt is one of them. Kurt can coach anywhere in the country and at any level. He’s smart, loyal, tough and players will love to play for him. He’s a guy that gives you his word and you can take it to the bank. I’m proud to have coached with him and the Arkansas offensive linemen are to lucky to have him. I know how big of a hire this is for coach Bielema and I can promise he got the right guy.” – Rex Ryan, Buffalo Bills Head Coach

“This is a great opportunity for Kurt. Arkansas will be a great fit for him. He is a great young coach with a lot of energy and fire. I loved working with him at the Bills and know players at Arkansas will feel the same.” – Chris Gragg, Buffalo Bills TE and former Arkansas Razorback

“I’m really excited for Kurt. He is a great coach and will do a great job at Arkansas. I learned a lot from him during his time with the Bills and I know he will bring a lot to the table for Arkansas.” – Eric Wood, Buffalo Bills Center