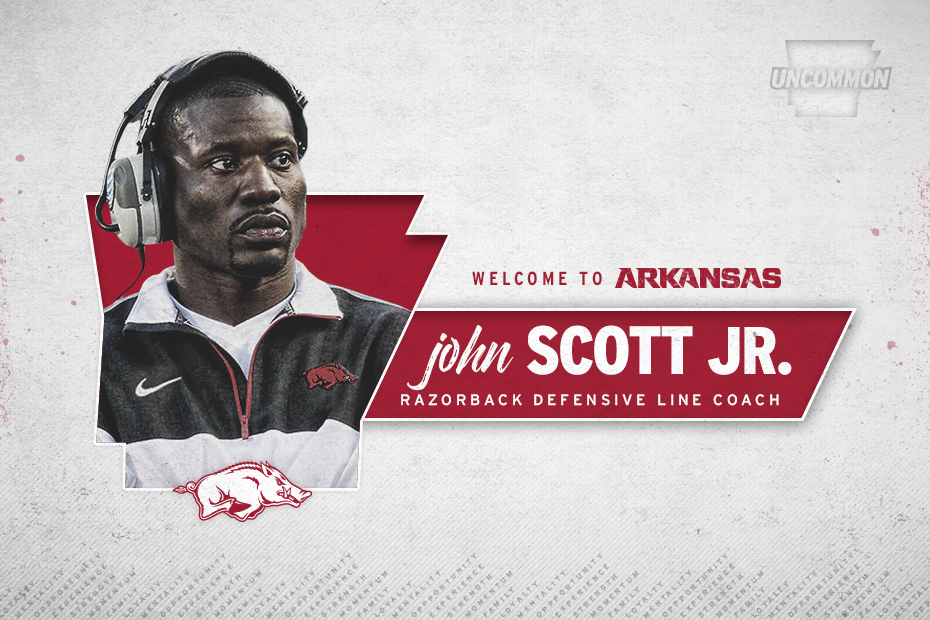 “With our transition to the 3-4 scheme, John was a candidate that I came across early in the process,” Bielema said. “After his interview and further research on his familiarity with the 3-4, he rose to the top and will be a great addition to our defensive staff.”

Running a 3-4 as its primary defense, the Jets led the NFL in rushing touchdowns allowed and red zone defense in 2015, while finishing second in rushing defense and fourth in total defense. Both defensive tackle Muhammad Wilkerson and cornerback Darrelle Revis, who played for defensive coordinator Paul Rhoads at Pitt, earned Pro Bowl honors. Scott Jr. was promoted to defensive line assistant prior to the 2016 season in which the Jets finished fifth in the AFC in rush defense and rushing touchdowns allowed. Defensive tackle Leonard Williams earned a Pro Bowl nod.

“I’m grateful for the opportunity to be part of coach Bielema’s staff and begin working hand-in-hand with coach Paul Rhoads and the rest of the staff on making this a great defense,” said Scott Jr. “I’ve been fortunate to have worked with Todd Bowles and Kacy Rodgers the last two years to enhance my knowledge and develop players in the 3-4 scheme. Over half of my coaching career has been teaching the 3-4 scheme and I’m excited to implement the knowledge I’ve learned in the pro and college ranks at Arkansas. I’m looking forward to being part of something great at the University of Arkansas and I’m excited to work with the defensive lineman and rest of the players.”

Scott Jr. mentored and coached a trio of defensive lineman at Texas Tech that worked their way into the NFL. In his first season, he tutored Kerry Hyder to All-Big 12 honors and an invite to the NFL Scouting Combine. In his first full season with the Detroit Lions in 2016, Hyder led the team with 8.0 sacks to go along with 36 tackles. Branden Jackson had his best season under Scott Jr. in 2014 as a junior before getting an invite to the 2016 NFL Scouting Combine. Jackson recently finished his rookie season with the Oakland Raiders.

Prior to joining Texas Tech, Scott Jr. spent three seasons (2010-12) as the defensive line coach and special teams coordinator on three Georgia Southern teams that advanced to the semifinals of the FCS Playoffs. Along the defensive line, he mentored two All-Americans, including Brent Russell, who was an All-American all three years under Scott Jr. and finished as the program’s all-time sack leader. In 2011, the Georgia Southern defensive line featured Russell, All-American Roderick Tinsley and All-Southern Conference selection John Douglas. In 2010, Russell was a finalist for the Buck Buchanan Award for the nation’s top defensive player at the Championship Subdivision level.

Scott Jr. was named defensive line coach at Georgia Southern in January 2010 after four seasons coaching outside linebackers at Missouri State and three years on the football staff at Western Carolina. As defensive line coach at Norfolk State for the 2005 season, Scott Jr. helped the Spartans achieve a No. 12 national ranking in passing defense. That season, Norfolk State allowed just over 158 yards per game. The Greer, South Carolina, native attended the NCAA’s Minority Coaches Academy in 2008 after being selected from a pool of 400 applicants.

After earning his bachelor’s degree in communications from Western Carolina, Scott Jr. played three years of professional football, including two years with the Greensboro (N.C.) Prowlers of the Arena Football League 2. He was named the team’s Defensive Player of the Year in 2000.

While playing for the Greensboro Prowlers, Scott Jr. gained coaching experience at the high school level as defensive line coach at West Davidson High School in 2001. Scott Jr. then went to Louisiana-Lafayette as a graduate assistant for two years, serving as a defensive line graduate assistant. He completed his master’s degree in education at Louisiana-Lafayette in 2006.