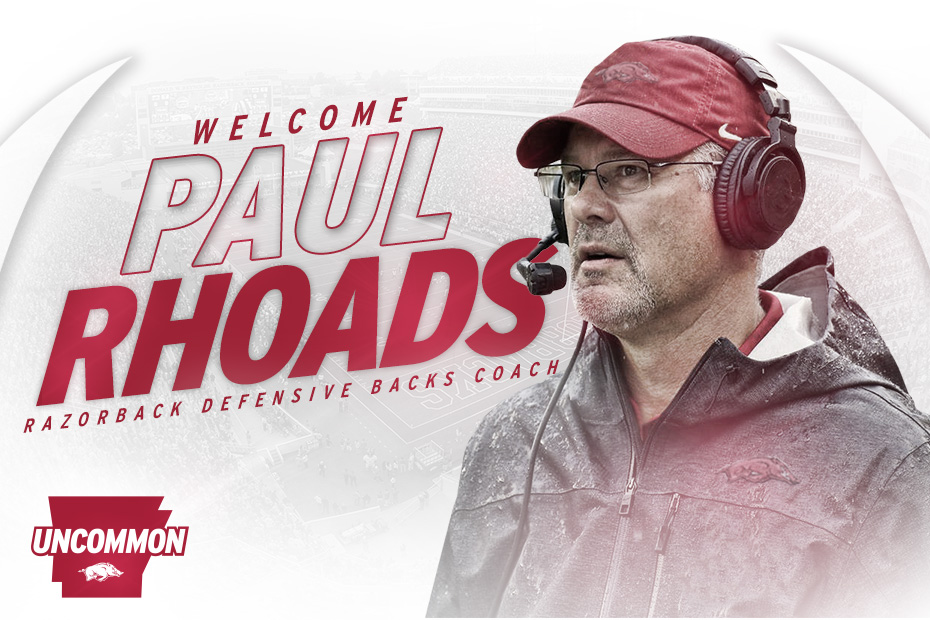 FAYETTEVILLE, Ark. – Arkansas head coach Bret Bielema announced on Wednesday the hiring of Paul Rhoads as the program’s defensive backs coach. Rhoads comes to Fayetteville after spending the last 16 years as either a head coach or defensive coordinator at Iowa State, Pittsburgh and Auburn, including the last seven seasons as Iowa State’s head coach.

“Paul has had a long standing reputation as a great teacher and recruiter even prior to his years of experience as a coordinator and head coach,” said Bielema. “He instantly brings years of experience to our defensive staff room and has coached the secondary and defensive backs to the highest levels of success.”

Over his coaching career, Rhoads has been a part of nine bowl games and has mentored six defensive backs that have been selected in the NFL Draft, highlighted by seven-time Pro Bowl selection and 2009 AFC Defensive Player of the Year Darrelle Revis. Revis was the 14th overall pick by the New York Jets in 2007 after playing for coach Rhoads when he was the defensive coordinator at Pittsburgh.

“I’m thrilled to be joining the Arkansas program and can’t wait to help build on the success coach Bielema and the staff have already experienced in three years,” said Rhoads. “Not only does coach Bielema have a track record of building winning programs but also developing young men of great character. Both are things I’m excited to be part of.”

A native of Ankeny, Iowa, Rhoads is no stranger to the SEC. Prior to returning to Iowa State, he spent the 2008 season as the defensive coordinator at Auburn under former head coach Tommy Tuberville, where his defense ranked 18th nationally in scoring, allowing 18.0 points per game and 178.8 yards passing to rank 22nd nationally.

During Rhoads’ first stint at Iowa state (1995-1999), he served as the secondary coach his last four years after coaching the inside linebackers in 1995. He also assisted with the Cyclones’ special teams.