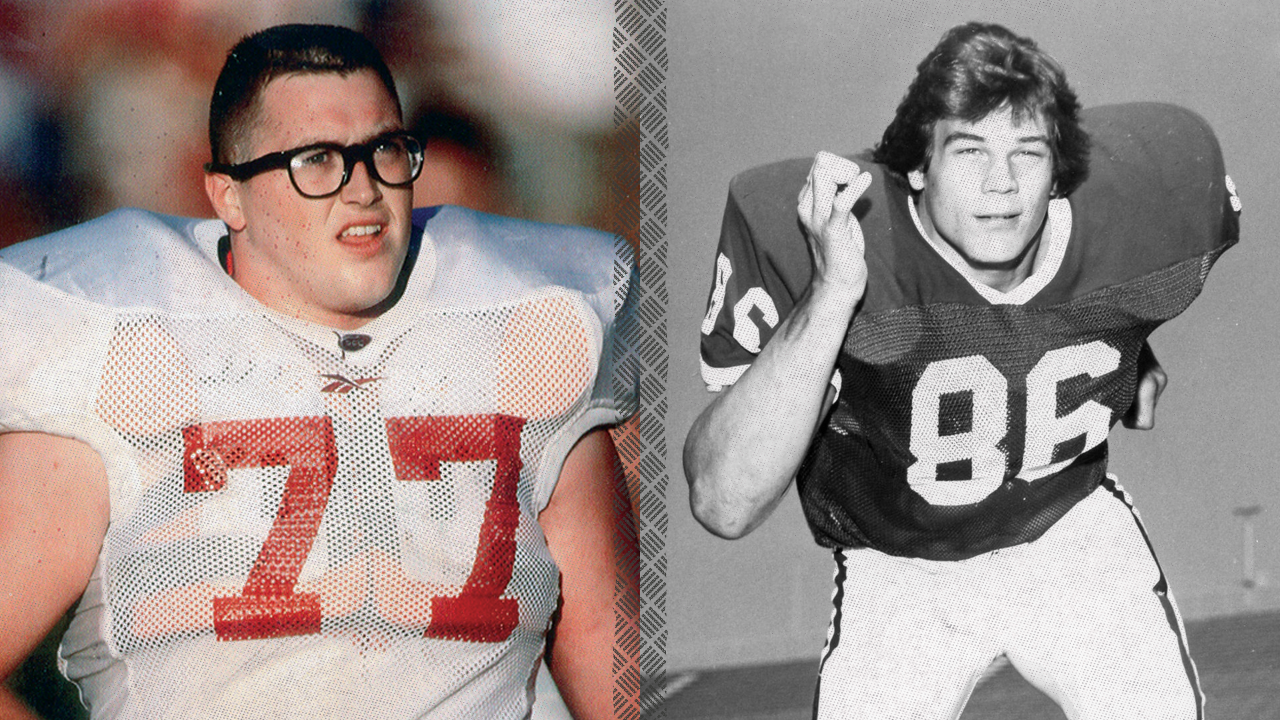 FAYETTEVILLE, Ark. – Arkansas football legends Brandon Burlsworth and Dan Hampton have once again been named to the ballot for induction into the National Football Foundation (NFF) & College Football Hall of Fame.

One of the most inspiring stories in Razorback history, Burlsworth joined the Razorbacks in 1994 as a walk-on. Following a redshirt year, he earned a scholarship with his work ethic in the weight room. After serving as a backup guard for the 1995 SEC Western Division champions, he earned a starting position in the spring of ’96 and never yielded it. He went on to start 34 consecutive games, concluding with the Florida Citrus Bowl on Jan. 1, 1999.

Burlsworth was an All-SEC offensive guard in 1997. In 1998 he not only earned all-conference honors, but was named a first-team All-American by The Football News. He was the leader of an offensive line that helped the Razorback offense score more points than it had since 1970 and produce more yards than it had since the 1989 season.

In the classroom, Burlsworth was equally astounding. He earned his bachelor’s degree in marketing management in 1997 and immediately went to work on his master’s in business administration. In December 1998, Burlsworth completed his master’s requirements to become the first Razorback football player to complete a master’s degree before playing in his final game.

Burlsworth was drafted in the third round by the Indianapolis Colts, but tragically died in an automobile accident less than two weeks later. The entire state of Arkansas was stunned and head coach Houston Nutt recommended that Burlsworth’s jersey be retired. Athletics director Frank Broyles quickly agreed.

His number 77 jersey was retired by the university in 1998.

Hampton was a four-year letterwinner at defensive tackle for the Razorbacks (1975-78). He played two seasons for Coach Frank Broyles (1975-76) and finished his career playing for Coach Lou Holtz (1977-78). Arkansas sported a 35-10-2 record during Hampton’s career, including a mark of 22-8-1 in Southwest Conference (SWC) play.

Hampton totaled 239 tackles (126 unassisted tackles) in his career with 32 being behind the line of scrimmage while recovering six fumbles. He was an AFCA First-Team All-American in 1978 and helped Arkansas to finish third nationally after winning the 1978 Orange Bowl. As a senior, he logged 98 tackles, including 18 behind the line of scrimmage. He was named the SWC Defensive Player of the Year and earned first-team All-SWC honors in 1978. He also earned the outstanding SWC Player of the Year award from the Houston Post for his senior season. Hampton was named second-team All-SWC in his junior season (1977). As a freshman, Hampton helped the Razorbacks to a share of the SWC title and a victory over Georgia in the 1976 Cotton Bowl.

Hampton was drafted by the Chicago Bears with the fourth pick of the first round in the 1979 NFL Draft. He played 12 seasons for Chicago, becoming one of only two Bears’ players to play in three decades for the team. He started 152 of his 157 career games with the Bears and finished third on the team’s all-time career sacks list with 82. Despite overcoming 10 knee surgeries during his career, Hampton earned All-Pro honors five times and four trips to the Pro Bowl, twice as a defensive tackle and twice as a defensive end. Four other times, he was an alternate for the Pro Bowl. He also earned All-Madden team honors five times.

He was the starting defensive end for the famed Chicago Bears’ 1985 Super Bowl Champions and was part of a unit that allowed only 198 points all season long, including shutouts of both teams in the NFC playoffs.

Hampton was named to the NFL 1980s All-Decade team and in 2002 was inducted into the Pro Football Hall of Fame. He was a member of the University of Arkansas’ All-Century team (selected in 1994) and the Arkansas All-Decade team for the 1970s. He is a member of both the University of Arkansas Sports Hall of Honor and the Arkansas Sports Hall of Fame.

To be eligible for the ballot, players must have been named a First Team All-American by a major/national selector as recognized and utilized by the NCAA for their consensus All-America teams; played their last year of intercollegiate football at least 10 full seasons prior; played within the last 50 years; and cannot be currently playing professional football. Coaches must have coached a minimum of 10 years and 100 games as a head football coach; won at least 60 percent of their games; and be retired from coaching for at least three full seasons. If a coach is retired and over the age of 70, there is no waiting period. If he is over the age of 75, he is eligible as an active coach. In all cases, the candidate’s post-football record as a citizen may also be weighed.

The announcement of the 2022 College Football Hall of Fame Class will be made in early 2022, with specific details to be announced in the future.