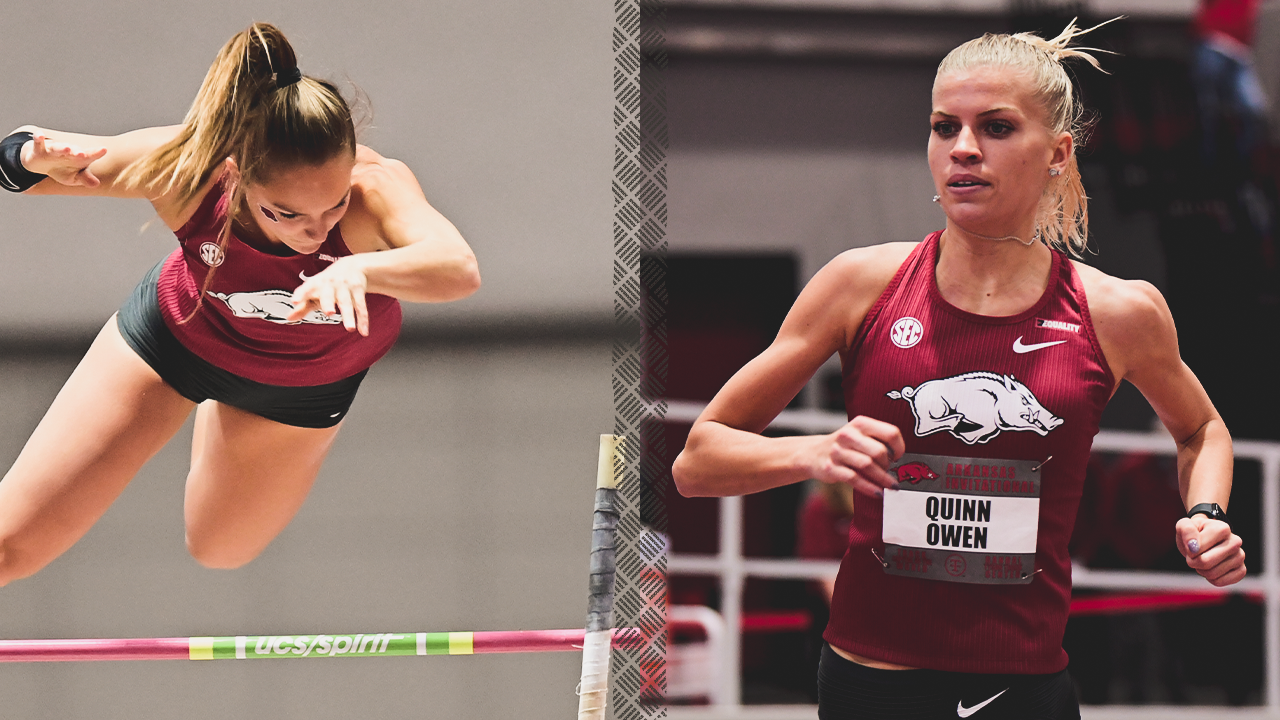 LUBBOCK, Texas – A pair of victories for the Razorbacks included a collegiate-leading performance by Nastassja Campbell in the pole vault while Quinn Owen broke a meet record in claiming the mile during Texas Tech’s Red Raider Open held Friday at the Sports Performance Center.

A runner-up performance by Arkansas in the 4×400 relay generated a time that ranks fourth all-time at UA and is currently second on the 2022 world list.

“Overall, I think we took a step in the right direction,” said Arkansas women’s associate head coach Chris Johnson. “Obviously, we always want a little more and to execute a little better, but overall, the effort was there. They went out and competed hard in a new environment outside of our great indoor facility.

Campbell set an indoor career best and collegiate leading mark of 14-7.25 (4.45) to lead a 1-2-4-6-7 finish by the Razorbacks among a field of 16 in the pole vault. Campbell moved to No. 7 on the UA all-time list just a quarter of an inch behind alum Desiree Freier and current teammate Bailee McCorkle.

Taking over the collegiate lead for 2022 heading into this weekend, Campbell bettered the previous collegiate best of 14-5.5 (4.41) set by Erica Ellis of Stephen F. Austin in December. She also currently ranks sixth on the 2022 world indoor list.

Campbell’s effort improved her previous indoor best of 14-4.75 (4.39), set back in 2019 when she competed at SFA. She had a first attempt clearance at 14-3.25 (4.35), matching her indoor best as a Razorback for the third time. Then she made her winning height on a second attempt.

“I jumped 4.39 back in my freshman year, so I’ve really been trying to get over 4.40 indoors,” said Campbell. “It felt good to get some consistency. My mindset is more of trying to get back to how I was jumping at the Olympic Trials during the summer, where 4.50 was a consistent bar for me. I think this was a really good step in the right direction.

“My second attempt at 4.55 was definitely the closest. My third attempt was a little different jump, but it was still a good attempt. Jumping at that height in my second meet of the indoor season feels really good. So, I’m happy where I’m at.”

Elien Vekemans finished second, clearing a career best of 14-3.25 (4.35) to improve her Belgian U23 national record and move to equal No. 10 on the UA all-time list with April Steiner. The previous indoor best for Vekemans was 14-1.25 (4.30) set in December during her victory at the Wooo Pig Classic.

On the all-time Belgium indoor list, Vekemans is now equal No. 2 performer, with an equal No. 7 performance.

“I was really excited for Elien,” noted Campbell. “To PR from a short approach back in December, and then to have another PR today was really awesome to see that for her. She had some good jumps today.”

Johnson added: “Nastassja set her PR indoors, which was fantastic, and Elien also set a PR, so she looked good as well. The other ladies competed hard, and Coach Compton has that group going well.”

The rest of the Razorback crew in the pole vault included McCorkle in fourth place and Kaitlyn Banas in sixth as both cleared 13-5.25 (4.10) while Mackenzie Hayward finished seventh with a 12-11.5 (3.95) clearance.

Owen won the mile in a meet record time of 4:51.15 and led the field by four-and-a-half seconds while eclipsing the meet record of 4:53.71 set by NJCAA champion Flomena Asekol of New Mexico JC in 2020.

“Kentucky went out and ran a great race, and executed a little better than we did,” noted Johnson. “Our ladies competed and fought hard. There are some things we need to clean up and readjust. In terms of effort, I’m very proud of the effort. They know they can compete with the best in the country.”

Effiong finished second in the 400m, winning her section in 52.56, currently third among collegians this season behind teammate Shafiqua Maloney’s 52.33. Kennedy Simon of Texas won another heat in a collegiate-leading 52.15 for the overall victory.

Alia Armstrong of LSU won the hurdle final in 7.96 with Kentucky’s Masai Russell runner-up in 8.01.

Jada Baylark finished third in the 60m final with a season best 7.21 to finish behind Julien Alfred of Texas, who produced a 7.10 collegiate leader that also equals the current world leading time while breaking the facility (7.13) and meet (7.17) records. Kentucky’s Abby Steiner placed second in 7.17. Finishing behind Baylark was LSU’s Favour Ofili with a 7.26.

Baylark also finished fourth in the 200m with a 23.39 while Razorback freshman Joanne Reid won her heat in 23.76 to place sixth overall and improve upon her 23.94 indoor debut from last week.

Razorback freshman Ashanti Denton claimed the B section of the 200m with a career best of 24.07.

A career best leap of 40-2 (12.24) placed Alexis Torns fourth in the competition and moves her to No. 11 on the UA all-time list. Torns moved into the overall lead when she produced her PR as the first jumper in the second round. Last week Torns had set a then career best of 39-5 (12.01) during the Arkansas Invitational.

“Alexis getting over that 40-foot mark is huge for her,” noted Johnson. “That showed signs of aggression, and I think she was fairly happy with it.”