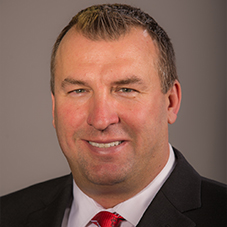 The University of Arkansas captivated the college football world by naming Bret Bielema the 32nd head coach in Razorback history in December 2012. Since arriving in Fayetteville, Bielema, who enters his fifth season on The Hill, has in turn captivated the passionate Razorback fan base and the state with the culture he is creating and the standards he is holding the program to.

Backed by his “Five Edges” to success, Bielema represented the qualities Arkansas was looking for: a leader of young men who holds student-athletes responsible both on and off the field and a coach who has a proven record of winning championships.

Since his arrival and over 51 games, Bielema, who is the only head coach in Arkansas history to win back-to-back bowl games, has dramatically changed the direction of the program. From his first 20 games as head coach to his most recent 20, Arkansas has gone from tied for 14th in the SEC in wins over that span to a tie for fourth with a 13-7 mark. His three straight winning seasons at Arkansas have featured seven wins over ranked teams, including five against top 15 opponents, and three on the road.

Arkansas’ pro-style offense has produced a different 3,000-yard passer each of the last two seasons, making it one of just nine FBS programs to do so, while Bielema has had a 1,000-yard rusher in each of his 11 seasons as a head coach. In fact, the Razorbacks are the only FBS program to have a different quarterback pass for 3,000 yards and a different running back go for 1,300 yards on the ground in each of the last two years.

Bielema’s recruitment philosophy of building a program on “uncommon” men has yielded record-setting results in the classroom. Arkansas posted a 2.94 team GPA in the spring of 2015, the highest recorded mark on record. Helping build the record-setting team GPA were 40 student-athletes on the Southeastern Conference (SEC) Fall Academic Honor Roll, good for the most in the conference. During Bielema’s four seasons, Arkansas leads the SEC with 139 student-athletes on the SEC Fall Academic Honor Roll, while the 40 honorees in 2015 and 39 in 2016 are the top two marks in the conference since he joined the league.

Behind his pro-style offense and developing student-athletes to their potential on and off the field, Bielema is building Arkansas into a program that prepares players for the NFL. Since his arrival, Bielema’s philosophy has translated into 17 NFL draft picks in four seasons – good for fourth most in the SEC – while Arkansas is the only program to have a tight end selected in the last three NFL Drafts. After having four defensive players chosen in the 2015 NFL Draft – the school’s most since 1989 – Arkansas saw five offensive players find NFL homes during the 2016 draft. The five offensive players taken were the second most from one school in the 2016 NFL Draft.

In 2016, Arkansas’ offense featured the SEC’s leading passer in Austin Allen and the regular-season rushing champion Rawleigh Williams III. Allen became just the fourth SEC quarterback since 2000 to open the season with multi-TD passes in seven straight games en route to leading the conference with 3,430 yards. Williams turned in an inspiring sophomore season after returning from a season-ending neck injury in 2015, leading the SEC in regular-season rushing yards while earning SEC Offensive PIayer of the Week honors three times and All-SEC first team status from the AP. Junior center Frank Ragnow was named Offensive Lineman of the Year by Pro Football Focus while fellow Trench Hog Dan Skipper ended his career with 47 consecutive starts under Bielema while earning All-SEC honors for the second straight year.

Arkansas picked up a trio of wins over top-15 teams in the regular season, good for a tie for third most in the nation. The first of those wins came at No. 15 TCU where Arkansas pulled out a dramatic 41-38 double-overtime win to snap the Horned Frogs’ 14-game home win streak. The Razorbacks took down No. 12 Ole Miss, 34-30, for the third straight season and picked up their first win over SEC East champ No. 11 Florida, 31-10, for the first time since 1982. It marked the sixth time in program history that Arkansas has made a bowl game three straight years.

In 2015, Arkansas’ off the field academic success was accompanied by on the field results to the tune of winning six of its last seven games and finishing in a tie for third place in the SEC West with a 5-3 mark. The Razorbacks displayed the resolve of their head coach by bouncing back from a tough start to pick up three SEC road wins and two overtime victories in conference action. Arkansas’ wins at Tennessee, Ole Miss and LSU marked the first time in program history that the Razorbacks won three road games against teams that finished in the final Associated Press Top 25 poll.

Arkansas’ surge in late October through November set up a Liberty Bowl matchup against Kansas State and one of Bielema’s mentors head coach Bill Snyder. For the second-straight year, the Razorbacks capped the season with a win in front of a large contingent of Arkansas fans, defeating Kansas State 45-23. With the win, Bielema became the first coach in program history to win back-to-back bowl games while Arkansas was the only SEC West team to win a bowl game in both 2014 and 2015.

A key ingredient in Arkansas’ success in 2015 was its balance and efficiency on offense. The Razorbacks led the SEC in scoring in conference games (34.4) while reaching 50-plus points four times during the final six regular season games, breaking the previous program single-season record of three set in 1910, 1916 and 2007. Arkansas was the only school in the SEC and one of eight nationally to have both a 3,000-yard passer and 1,000-yard rusher during the regular season. Brandon Allen’s 30 touchdowns through the air and Alex Collins’ program record 20 scores on the ground made them the only duo in the nation to hit those statistical peaks.

Individual records and postseason accolades stacked up during and after the 2015 season, highlighted by junior tight end Hunter Henry winning the John Mackey Award. A consensus first-team All-American, Henry led all FBS tight ends with 739 yards receiving, as Arkansas became the first program to have two players win the John Mackey Award. Collins became just the third player in SEC history to start his career with three straight seasons of 1,000-yards rushing en route to earning All-America third team honors from Athlon. Paving the way for Collins was senior offensive lineman Sebastian Tretola, who was the co-recipient of the Jacobs Blocking trophy as the SEC’s top blocker. Tretola was named a first-team All-American by Sports Illustrated and a second-team All-American by three other outlets.

Henry was not only the first Razorback taken in the 2016 NFL Draft but also the first tight end selected when he went in the second round to the San Diego Chargers. Jonathan Williams (Buffalo Bills) and Collins (Seattle Seahawks) became just the second running back duo since Arkansas greats Darren McFadden and Felix Jones in 2008 to be picked in the top five rounds of the same NFL Draft when they both went in the fifth round. Less than 30 picks after Collins, both Tretola (Tennessee Titans) and Allen (Jacksonville Jaguars) came off the board in the sixth round to round out the program’s most offensive players taken in the same draft since 2008.

Arkansas closed 2014 and its second season under Bielema by winning three of its final four games against traditional powers LSU, Ole Miss and Texas. The victories marked the first time in school history the Hogs have defeated those three teams in the same season. The Razorbacks finished 7-6 with a 31-7 victory over Texas in the AdvoCare V100 Texas Bowl, marking Arkansas’ first winning season since 2011.

Bielema has always prided himself on a balanced offensive attack and that is exactly what the Razorbacks accomplished in 2014. Running backs Williams and Collins were the only FBS teammates to rush for more than 1,000 yards each and both players finished in the top five of the SEC in rushing totals. Allen threw for 20 touchdowns, the sixth most in a single season in school history, and his five interceptions, were the fewest by a Razorback quarterback since 1992.

Arkansas was the SEC’s most improved defense in 2014, allowing just 19.2 points per game. With 11.9 points per game improvement from the previous season, the Razorbacks had the seventh-most improved defense in the nation. Arkansas became the first unranked team in college football history to post back-to-back shutouts over ranked opponents after blanking No. 20 LSU and No. 8 Ole Miss. Senior linebacker and consensus first-team All-SEC selection Martrell Spaight was the first Razorback to ever lead the SEC with 128 total tackles.

In his first season at Arkansas (2013), the Razorbacks had five student-athletes named Freshmen All-Americans: Collins, offensive linemen Denver Kirkland and Skipper, Henry and defensive tackle Darius Philon. Collins was named the SEC Freshman of the Year after he became the second Razorback freshman to rush for more than 1,000 yards in a season. Collins and McFadden are the only Razorbacks in school history to accomplish this feat and the only two Razorbacks to be named SEC Freshman of the Year.

Bielema lettered from 1989-92 at Iowa after joining the program as a walk-on. He earned a scholarship after his first year and was a member of Iowa’s 1990 Big Ten championship team. A starter as a junior in 1991, he was a team co-captain as a senior. Bielema signed a free agent contract with the Seattle Seahawks and later completed his playing career with the Milwaukee Mustangs of the Arena Football League.