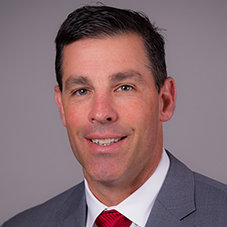 One of the most brilliant offensive minds in college football, Dan Enos enters his third season as Arkansas’ offensive coordinator and quarterbacks coach.

Enos joined head coach Bret Bielema’s staff in January of 2015 after spending the previous five seasons as head coach at Central Michigan. He boasts more than 20 years of experience coaching skill position players and over 10 years of play-calling experience, including all five years at Central Michigan. He has tutored and developed many NFL stars, including offensive tackle Eric Fisher, who became the first Mid-American Conference player to be selected No. 1 overall in the NFL Draft in 2013 by the Kansas City Chiefs.

Backed by his pro-style offense that features a balanced attack, Enos has turned the Arkansas offense into a threat through the air and on the ground. Over his two seasons as OC, Arkansas is one of two FBS programs with 3,000-yard passer and 1,300-yard rusher in both 2015 and 2016. Even more impressive, the Razorbacks are the only program to accomplish the feat with a different quarterback and different running back in each of those seasons.

In his first season on The Hill, Enos helped Arkansas lead the SEC in scoring in conference games, averaging 34.4 points per conference game. The Razorbacks scored 50+ points four times over the final six regular season games, breaking the previous program single-season record of three set in 1910, 1916 and 2007.

The Razorback offense was wildly successful primarily due to the incredible balance between the passing and rushing attacks. Arkansas was the only school in the SEC and one of eight nationally to have both a 3,000-yard passer and 1,000-yard rusher during the regular season.

Under the direction of Enos in 2015, quarterback and Manning Award finalist Brandon Allen became the third player in program history to throw for 3,000 yards in a season (3,440) and became the Razorbacks’ all-time leader in touchdown passes (64).  Behind a program-best three 400-yard games, Allen finished his senior campaign with 3,440 yards passing and 30 touchdowns.

Allen was one of five offensive players find NFL homes during the 2016 draft. The five offensive players taken were the second most from one school in the 2016 NFL Draft, highlighted by Hunter Henry being the first tight end taken and running backs Jonathan Williams and Alex Collins becoming just the third backfield duo to be selected in the first five rounds of the same draft since 2008.

The 2016 season ushered in a new starting quarterback with similar results, as Austin Allen led the SEC with 3,430 yards passing in his first season as a starter under Enos. Allen became just the fourth SEC quarterback since 2000 to throw for multiple touchdown passes in each of the first seven games of the season to finish second in the league with 25 TDs on the year.

Despite seeing two 1,000-yard rushers move onto the NFL following the 2015 season, Enos also turned another first-time starter in running back Rawleigh Williams III into an All-SEC first team choice. A three-time SEC Offensive Player of the Week in 2016, Williams led the SEC regular-season in rushing while his 1,360 yards on the year were bolstered by seven 100-yard performances.

Hired as Central Michigan’s head coach in 2010, Enos led the Chippewas to bowl eligibility in each of the past three seasons. CMU passed for over 3,000 yards in four of his five seasons as head coach.

Ryan Radcliff was Enos’ first starting quarterback at Central Michigan. Under Enos’ tutelage, Radcliff became one of the best quarterbacks in CMU history as he passed for 9,917 yards and 63 touchdowns during his career. The signal-caller ranks second in school history in every major passing category.

Enos also helped develop wide receiver Titus Davis, who finished his career as one of the best wide outs in school history. He became the first player in Football Bowl Subdivision history to catch at least eight touchdown passes in each of his four collegiate seasons – all under Enos. Davis finished his career in 2014 as the school’s all-time leader in career receiving yards (3,705), career touchdown receptions (37) and single-season touchdown receptions (13).

The 2014 season saw Central Michigan lead the MAC and rank eighth nationally in time of possession, controlling the clock for an average of 33:24 per game. The Chippewas were also very efficient in the passing game, ranking third in the MAC and 18th nationally with a 149.55 passing efficiency rating. Quarterback Cooper Rush set an FBS bowl record with seven passing touchdowns in the 2014 Popeye’s Bahamas Bowl. Rush also passed for a school-record 493 yards in the contest.

In each of his final two seasons at CMU, Enos helped the Chippewas rank in the top half of the MAC in passing efficiency, third down conversion percentage and time of possession.

The Chippewas had a memorable 2012 campaign under Enos, winning its third bowl game in school history. Senior wide receiver Cody Wilson finished his career with 42 consecutive games with a reception and junior running back Zurlon Tipton rushed for 1,492 yards, the fourth-best single-season mark in school history.

Prior to Central Michigan, Enos spent four seasons in a variety of offensive roles at Michigan State. He served as the Spartans’ running backs coach from 2007 to 2009 and coached quarterbacks in 2006. He was named one of Rivals.com’s Top 25 recruiters in the nation in 2009.

While at Michigan State, Enos was the position coach for three NFL running backs – Javon Ringer, Edwin Baker and Jehuu Caulcrick. Ringer was selected in the fifth round of the 2009 NFL Draft by the Tennessee Titans, while Baker was a seventh round draft pick by the San Diego Chargers in 2012 and Caulcrick played for the Buffalo Bills in 2010.

In 2006, Enos mentored quarterback Drew Stanton, who earned team MVP honors after accounting for 2,252 total yards and 17 touchdowns as a senior. Following the season, Stanton was selected by the Detroit Lions in the second round of the NFL Draft.

Prior to that, Enos spent two years as quarterbacks coach at Cincinnati. In 2004, Enos helped senior Gino Guidugli finish his career as the school’s all-time leading passer with 11,453 career yards, including 2,633 passing yards and 26 passing touchdowns as a senior.

A standout quarterback at Michigan State from 1987-90, Enos started two seasons and earned a 16-7-1 record (.688) as a starter, leading the Spartans to two bowl victories. He still ranks No. 13 in school history in passing yards (3,837) and completions (297). His .621 completion percentage still ranks fourth-best in Spartan history.

Enos graduated from Michigan State with a degree in business administration in 1991 and earned his master’s in sports administration in 2006. The Dearborn, Michigan, native is married to his wife, Jane. The couple has two children, Lia and Alex.