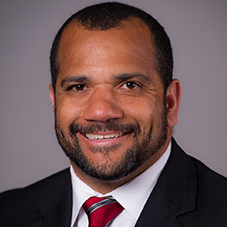 One of Singleton’s points of emphasis is ball security and the Cowboys did not disappoint in that facet in 2014. Oklahoma State’s running backs did not commit a single turnover during the season, combining for 509 touches with only one fumble, a ball that was recovered by the Cowboys.

In 2013, Oklahoma State rushed for 35 touchdowns in the regular season, ranking second in the Big 12 and 15th nationally. The mark was also the sixth-best in a single season in school history. Desmond Roland rushed for 13 touchdowns, leading all Big 12 running backs and ranking 31st nationally despite not starting until the seventh game of the season.

Singleton served as the position coach for Joseph Randle, one of the most heralded running backs in Oklahoma State history. In 2012, Randle was a unanimous first-team All-Big 12 selection after leading the Big 12 with 1,417 rushing yards. He went on to be selected by the Dallas Cowboys in the fifth round of the 2013 NFL Draft.

In his first season at Oklahoma State, Singleton helped the Cowboys to one of the best seasons in program history, winning the Big 12, finishing 12-1 and ranked No. 3 in the final Associated Press poll. Randle rushed for 24 touchdowns, the fourth-most in FBS that season and earned All-Big 12 first team honors by the AP. The Cowboys’ running backs totaled 10 games of 100 yards or more.

Singleton joined the Oklahoma State staff after 11 years at Air Force where he was the running backs coach during the final five years of his tenure there. He also served as the run game coordinator from 2007-10. The Falcons led the Mountain West in rushing and ranked in the top 10 nationally each season.

In 2010, Air Force ranked second in the nation with 306.5 rushing yards per game. The team totaled 3,985 rushing yards, which was the second-best total in MWC history at the time. The Falcons also rushed for 41 touchdowns, tying the MWC record.

The 2009 Falcons were very effective on the ground, due in large part to Singleton’s running backs. That season saw Air Force average 283.5 rushing yards per game, the third-best mark in the nation.

During his first campaign at the Academy in 2006, the Falcons averaged nearly one less fumble per game than the previous season.

Singleton began his coaching and Air Force career as an instructor and assistant head coach/offensive coordinator at the USAFA Prep School in 2000. He was then stationed at Little Rock AFB in Jacksonville, Ark., from January 2001 to January 2003 where he served as a public affairs officer. He returned to the Academy in the spring of 2003 and served as the executive officer for the athletic director before becoming the junior varsity defensive coordinator and varsity assistant coach.

As a player, Singleton starred at Air Force where he earned three letters at halfback and was named All-Western Athletic Conference honorable mention as a senior. The San Antonio, Texas native helped the school win 10 games in back-to-back seasons for the first time in school history, including its first outright conference title. He is one of just six players in Air Force history to ever be elected a two-time captain.

Singleton graduated from the Air Force Academy in 1999 with a degree in social sciences. He and his wife, Jennifer, have two daughters, Morgan and Mallory.