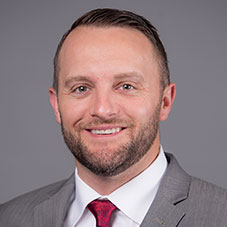 Joe Craddock is in his second season as the program’s offensive coordinator and quarterbacks coach at Arkansas.

His first season on the Hill featured multiple players with 100-yard rushing games in Rakeem Boyd (3) and Devwah Whaley (1), as all three of Boyd’s came during SEC play. Arkansas also featured one of the most consistent tight end units in the league, with the Razorbacks ranking second in the country in TE touchdowns and fourth in the nation in TE first downs. A big reason for their success was because of the unit blocking for them, led by fifth-round NFL Draft pick Hjalte Froholdt, who completed a second-straight season without allowing a sack in 2018.

This past spring, Craddock was reunited with quarterback Ben Hicks, who joined the Razorbacks as a graduate transfer from SMU.  With the Mustangs, Hicks was the starting QB under Craddock for two seasons and the starter in his final season in Dallas in 2018 when he set numerous SMU passing records including career passing yards (9,081), total offense (8,977), TD passes (71), TDs responsible for (74), completions (718) and 300-yard games (12). Hicks led the Razorbacks’ offense during spring drills, starting the spring game. Arkansas also added Texas A&M transfer Nick Starkel this summer and incoming four-star quarterback KJ Jefferson.

Craddock came to Fayetteville after spending three seasons (2015-17) as offensive coordinator and quarterbacks coach at SMU. Prior to SMU, he coached at Clemson for three seasons as an offensive graduate assistant (2013-14) and a player development coach (2012).

Sutton, the 40th overall pick in the 2018 NFL Draft by Denver, posted career receiving totals of 3,152 yards and 31 touchdowns on 189 receptions in four seasons at SMU. He averaged 16.4 yards per catch in each of his last two seasons and finished third on the Mustangs’ all-time receiving list.

Two of the most dynamic receivers in college football, Sutton and Quinn were the only pair of teammates to rank in the top 10 in touchdown receptions. Quinn finished the year with 13 TD catches, while Sutton had 12. The duo also combined for 12 100-yard receiving games with six apiece.

A Biletnikoff Award and Earl Campbell Tyler Rose semifinalist, Quinn led the nation in receptions with 114 and ranked inside the top 15 nationally in receiving touchdowns (No. 4, 13), receiving yards per game (No. 10, 95.1) and receiving yards (No. 11, 1,236). He turned in two of the three top reception performances in the FBS during the regular season with 17 catches twice and became the only player this century to register 15-plus catches in three straight games.

In Craddock’s first year at SMU, the Mustangs increased their scoring output by 16.7 points per game – the second-largest increase in the nation in 2015. He also helped develop two of the nation’s top freshmen in Sutton and Jones. Sutton was named a Freshman All-American in 2015 after ranking No. 1 among freshmen with nine touchdown catches.

During his time at Clemson, Craddock, alongside Morris who was offensive coordinator, aided in the development of quarterback Deshaun Watson. In 2014, the Tigers’ offense averaged 448.2 yards of total offense per game, ranked No. 21 in scoring offense (35.4) and was one of just 14 teams in the FBS to average both 200 yards rushing and passing per game.

Prior to his collegiate coaching career, Craddock was the offensive coordinator at Briarwood Christian School in Birmingham, Alabama, during the 2010 and 2011 seasons. Briarwood Christian went 25-4 during Craddock’s tenure and finished as the state runner-up in 2010.

Following the 2011 season, he was hired as an offensive player development coach at Clemson by coach Dabo Swinney. After the 2012 season, Craddock was given on-field graduate assistant duties working with the quarterbacks, a role he held until December 2014.

Craddock played at Middle Tennessee from 2004-08 and was a team captain his senior year. He also played baseball for the Blue Raiders in 2008.

A native of Chelsea, Alabama, Craddock earned a bachelor’s degree in liberal arts at Middle Tennessee in 2008. He and his wife, Abby, have a daughter, Charlie, and a son, Cain.