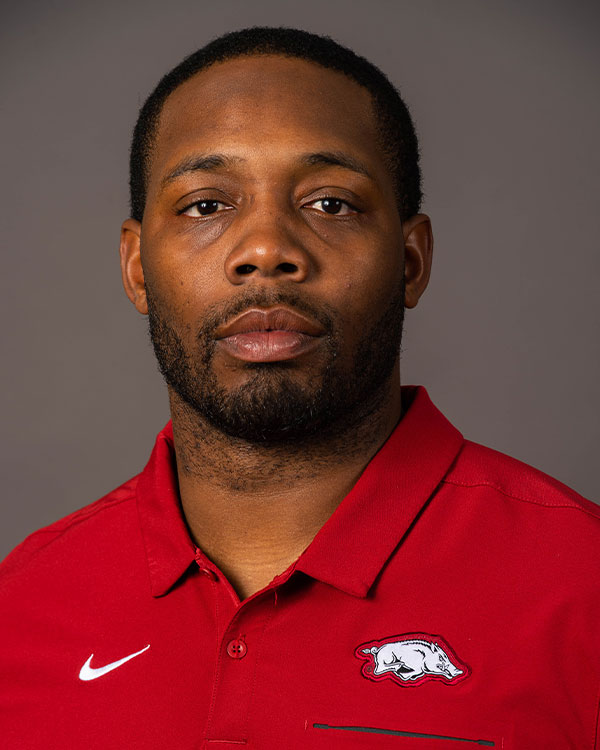 Kenny Guiton leads Arkansas’ wide receivers after joining the Razorbacks prior to the 2021 season.

Guiton’s first season with the Hogs was a memorable one with the team winning nine games, including the Outback Bowl. His wide receivers were a major contributor in an Arkansas offense that was explosive, gaining 441.7 yards per game including 213.9 yards per game passing. Wide receiver Treylon Burks took another step forward in 2021 under Guiton’s supervision, earning First-Team All-SEC from both the league’s coaches and the Associated Press while also being named to PFF’s All-America second team. Burks produced one of the greatest seasons ever by an Arkansas wideout, catching 66 passes – second-most in a single season by a Razorback – for 1,104 yards – third-most in a single season – and 11 touchdowns – second-most in a single season. Burks set the school record for 100-yard games in a single season with six and ranks second all-time with 10. Guiton’s efforts to develop other threats in the passing game paid off with senior Tyson Morris and transfer Warren Thompson. Morris set career bests with 24 receptions, 337 yards and two touchdowns while Thompson became a complimentary deep threat to Burks, catching 19 passes for 304 yards and a pair of scores.

Guiton, a former Ohio State quarterback, spent the 2020 season at Colorado State as part of head coach Steve Addazio’s coaching staff. Despite the Rams playing only four games due to COVID-19, wide receiver Dante Wright finished second in the Mountain West in receiving yards per game (105).

Guiton guided the wide receivers at Louisiana Tech in 2019, helping the Bulldogs to a 10-3 record and a win over Miami (Fla.) in the Walk On’s Independence Bowl. He tutored one of the best receiving corps in Conference USA as the team had the fourth-best passing offense in the league. He developed Adrian Hardy and Malik Stanley into All-Conference USA honorable-mention performers, led by Hardy’s 42 catches for 534 yards and Stanley’s 40 receptions for a team-high 649 yards.

He spent 2017-18 as the wide receiver coach at Houston, working with Arkansas offensive coordinator Kendal Briles while he was the Cougars’ offensive coordinator in 2018. The Cougars ranked fifth nationally in scoring (43.9 ppg), seventh in total offense (512.5 ypg) and 16th in passing offense (295.5 ypg). Houston scored 30+ points in all 12 regular season games and 40+ in 10 of those games.
Under Guiton’s tutelage, Marquez Stevenson earned All-American Athletic Conference honors, catching 75 passes for 1,019 yards. Steven Dunbar earned the same honor in 2017 after catching 76 passes for 1,070 yards and three touchdowns.

Guiton spent four months at Texas as a quality control coach before returning to Houston to lead the team’s wide receivers for head coach Major Applewhite. He began his career in coaching as a graduate assistant at Houston from 2015-16, working under head coach Tom Herman, his former offensive coordinator at Ohio State. Guiton was part of Cougars teams that went 13-1 and 9-4 as a graduate assistant, which included the 2015 Chick-fil-a Peach Bowl victory over No. 9 Florida State. Over his four total years at Houston, he saw the program reach four straight bowl games and helped produce a 1,000-yard receiver in all four seasons.

Guiton played quarterback at Ohio State from 2009-13, appearing in 22 games while throwing for 893 yards and 16 touchdowns. As a senior, he started two games and played in eight total, completing 69% of his passes and tossing 14 touchdowns for the 12-2 Buckeyes. In his second career start, he set a program-record with six first-half touchdown passes against Florida A&M.

As a professional, Guiton participated in mini-camp for the Buffalo Bills in 2014 before joining the Arena Football League’s LA KISS.

He earned a bachelor’s degree from Ohio State in family resource management in 2013.

He and his wife, Rachell, have two sons: Jordan and Jaxson.