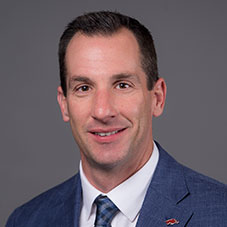 Mark Smith begins his second season at Arkansas in 2019 working with the team’s cornerbacks.

In his first year with the Razorbacks in 2018, Smith helped guide a young group along with junior Ryan Pulley. Pulley put together a strong all-around performance with three interceptions, seven pass breakups, a forced fumble and 3.5 tackles for loss in his final year on the Hill. Playing alongside Pulley for most of the season were freshmen Montaric Brown and Jarques McClellion. The duo combined to start 12 games with Brown starting three and McClellion nine. McClellion’s 25 tackles ranked behind only Pulley’s 37 at the cornerback position.

A stellar recruiter, Smith helped land a pair of four-star cornerbacks in Gregory Brooks and Devin Bush who both enrolled early and went through spring practice. Speedster Malik Chavis will join the group this fall as well.

Smith arrived at SMU as the Director of Recruiting in 2015 and added defensive analyst to his duties for 2017 season. He joined the Mustangs with experience at both the college and high school levels having spent time as a high school head coach and at Oklahoma as a defensive quality control coach.

Prior to SMU, he served at Hurst L.D. Bell from 2009 to 2014, earning a promotion to head coach in early 2011. With Smith at the helm, Bell made the playoffs for three straight seasons. He also served as an assistant at Irving MacArthur and Colleyville Heritage high schools in Texas.

He and his wife, Michelle, have three children: Makenna, Micah and Mailey Kay.