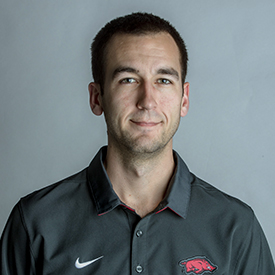 A contributing part of several Arkansas men’s cross country and track and field SEC Championship teams during his time in undergraduate, Rick Elliott took on a new role as a volunteer coach with the women’s program in 2014. In his position with the Razorbacks, Elliott assists head coach Lance Harter with the training of the cross country, middle-distance and distance student-athletes.

A native of Springfield, Missouri, Elliott made his was to Fayetteville, Arkansas in the Fall 2008 as an eight-time All-State honoree out of Kickapoo High School. Elliott began his tenure as a Razorback, finishing among the top 30 best runners in the conference at the 2008 SEC Cross Country Championships in Starkville, Mississippi, as one of Arkansas’ seven best runners at the meet. He went on that first academic year to be named to SEC All-Freshman team for an eighth-place finish in the mile at the conference indoor championships.

During his final two cross country season’s Elliott was part of strong senior coalition which led the revitalized Razorbacks to back-to-back SEC titles in 2010 and 2011 — the latter year Elliott claimed All-SEC First Team honors for a career-high sixth-place finish.

His progression on the track was also markedly noticeable with his focus during the outdoor season in the steeplechase. A solid top-five finish at the 2010 SEC Outdoor Championship transformed into an exceptional top-three finish at the same meet one year later. His personal best time of 8:51.03 from the Stanford Invitational qualified him for his second NCAA West Preliminary Round where his 12th-place finish advanced him on to the outdoor national championship.

Elliott graduated from Arkansas in December 2012 with a degree in Kinesiology and earned a Master’s in Recreation and Sport Management in 2017. Rick and his wife Megan were married in June 2014 and the couple resides in the Fayetteville area with their sons Otto and Rhodes.