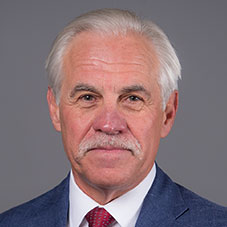 Steve Caldwell returned to Fayetteville for the second time in his career in 2018 with more than 30 years of coaching experience, highlighted by a 1998 national championship alongside coach John Chavis at Tennessee, and 20 bowl games appearances.

In his first season back on the Hill, Caldwell’s defensive line put together a strong campaign, led by senior Armon Watts. After coming into the year with a combined 11 tackles over three seasons, Watts busted out with a 42-tackle, seven-sack performance en route to a sixth-round draft selection by the Minnesota Vikings. Next to Watts in the trenches was junior McTelvin Agim, who racked up 45 stops, 10.0 tackles for loss and three forced fumbles, becoming the first Razorback with double-digit TFLs in a season since 2015.

From 2014-17, Caldwell served as associate head coach at Boise State while overseeing the defensive line room. Over his four seasons, Boise State accumulated a record of 42-12 with three bowl wins in four appearances while his defensive line unit helped hold 24 of 54 opponents to under 100 yards rushing over that span.

Caldwell mentored an All-Mountain West first team selection in each of his four seasons at Boise State, including defensive end Sam McCaskill and nose tackle David Moa in 2016. In 2017, Caldwell coached defensive lineman Curtis Weaver, who became the first freshman in Mountain West history to earn first-team honors as a freshman. Weaver led the conference and led all FBS freshmen with 11 sacks (T-6th nationally) en route to being named to the USA TODAY Freshman All-America team.

Boise State tied for the Mountain West lead in sacks in 2017 and was the only program to finish in the top four in the conference in sacks each of Caldwell’s four seasons (2014-17). The Broncos also ranked second in the Mountain West in rushing defense in 2017, highlighted by holding an explosive Oregon offense to a season-low 47 yards on the ground during their 38-28 win over the Ducks in the Las Vegas Bowl. It also marked the fourth time in Caldwell’s four years that Boise State finished in the top four in the conference in rushing defense.

Caldwell oversaw one of the most dominant defensive lines in the country in 2015, as his front four was the Mountain West standard and ranked fifth in FBS in rushing defense, allowing just 108.2 rushing yards per game. The stubbornness against the run helped the Bronco defensive unit rank second in the conference and 18th in the country in scoring defense with 20.2 points allowed per game.

Among the numerous standouts in the trenches in 2015 was junior Kamalei Correa, who racked up a team-best 11.0 sacks and 7.0 tackles for loss and was selected by the Baltimore Ravens with the 11th pick of the second round (42nd overall) in the 2016 NFL Draft. Correa finished his collegiate career with a Defensive MVP performance during a Poinsettia Bowl victory over Northern Illinois after recording 2.0 sacks and 2.5 tackles-for-loss.

Prior to Boise State, Caldwell rejoined his alma mater Arkansas State for the 2013 campaign. Red Wolves captured a share of the Sun Belt Conference Championship in 2013, and won the 2013 GoDaddy Bowl. Under Caldwell’s tutelage, Ryan Carrethers garnered first-team All-Sun Belt Conference honors, and went on to be selected by the San Diego Chargers in the 2014 NFL Draft.

Caldwell’s first stint at Arkansas came from 2010-12, when he was in charge of the defensive line. During his time with the Razorbacks, Arkansas posted back-to-back 10-win seasons (2010-11) and played in the Sugar Bowl. Arkansas ranked 36th or better nationally in sacks in each of Caldwell’s three seasons, highlighted by finishing the 2010 campaign tied for eighth nationally in sacks.

In 2011, Arkansas’ defensive end group of Jake Bequette, Tenarius Wright, Trey Flowers and Chris Smith combined for 27 tackles for loss and 16 sacks. Bequette earned All-SEC first team honors after leading the SEC with 10 sacks, a mark that was good for ninth nationally. Bequette was named the Defensive MVP of the Cotton Bowl after two sacks and a forced fumble. He was later selected by the New England Patriots in the third round of the 2012 NFL Draft.

Caldwell spent the 1995-2008 seasons coaching defensive ends at Tennessee alongside Chavis. Over 14 seasons, the Volunteers won the 1998 National Championship, made 13 bowl appearances and finished 10 seasons ranked in the top 25.

A dean’s list student at Arkansas State, Caldwell played four years of football as a defensive end and linebacker. The start of his coaching career came over three seasons at his alma mater from 1978-80. Caldwell then moved on to Northwest Mississippi Community College, where he coached the offensive line for four seasons and was part of a national championship team in 1982.

Caldwell rejoined Arkansas State in 1985 as the linebackers coach and was with A-State through 1989. The school won back-to-back league championships (1985-86) and made three-straight trips to the NCAA Division I-AA Playoffs from 1985-87.

He worked as a graduate assistant at Tennessee in 1990, before moving on to Pacific from 1991-93. He was the linebackers coach in 1991 and added co-defensive coordinator responsibilities in 1992 and 1993.

Caldwell and his wife, Leisa, have three children: Lauren, Lendell and Landon.