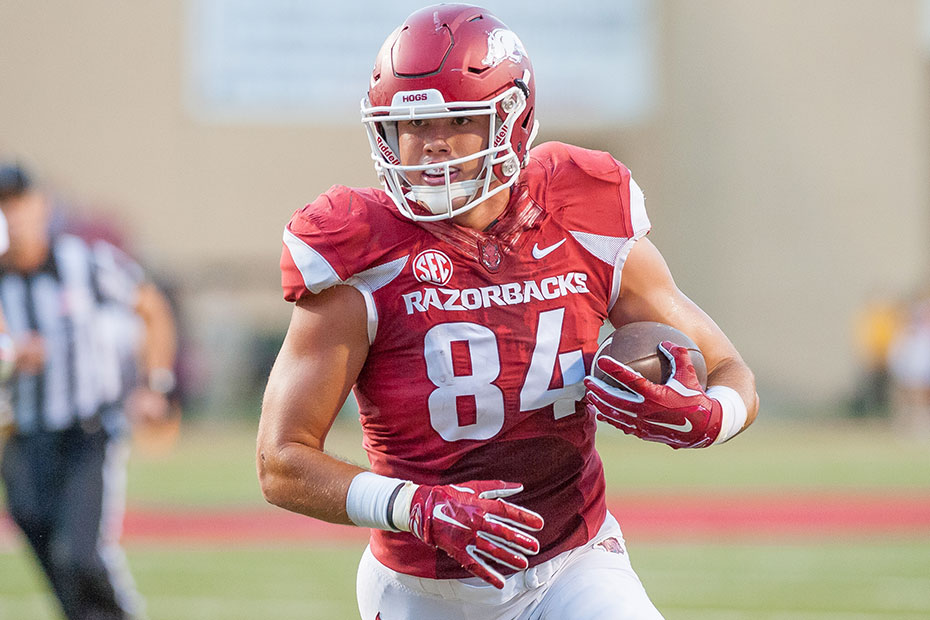 To receive the honor, a player must be named first team on at least two of the five selected All-America teams – American Football Coaches Association, Associated Press, Football Writers Association of America, The Sporting News and Walter Camp Foundation.

Over the last week, Henry has become one of the most decorated players in program history. The Little Rock, Arkansas native received first team All-America nods from the AFCA, AP, Sporting News and Walter Camp Foundation. The FWAA is the only team in which Henry was not first team All-America as the organization did not name a tight end to either of its All-America teams.

Henry also captured the 2015 John Mackey Award as the nation’s most outstanding collegiate tight end, joining 2010 recipient D.J. Williams as the only two Razorbacks to win the award. Arkansas is now the only program to produce multiple winners.

The 6-5, 253 pound junior totaled 46 receptions for an FBS-leading 647 yards among tight ends and three touchdowns this season. In addition, he also led all FBS tight ends with 32 first down catches and 19 plays of 15-plus yards. His two 100-yard receiving games led the SEC and were tied for second most nationally among tight ends and helped him equal Williams’ program record of four career 100-yard receiving games by a tight end.

Henry enters Arkansas’ Liberty Bowl appearance not having dropped a pass through 12 games this season and has a reception in 22 straight games, which is the longest active streak among SEC tight ends and fourth longest among FBS tight ends. Henry’s receptions in 2015 have resulted in a first down or a touchdown 76 percent of the time, making him senior quarterback Brandon Allen’s most reliable target. For his career, 89 of his 111 receptions have produced a first down or touchdown, for a conversion rate of 80 percent.

Of his 1,541 career receiving yards, 579 (37 catches) have come on third down – more than any other down. His receptions on third-down passing plays result in a first down or touchdown 97.3 percent of the time (34 first downs, 2 touchdowns).

Among all FBS tight ends, Henry ranks first in the following third down categories: Receiving yards (250), first downs (14) and 15-plus yard catches (8). He also leads all SEC receivers in third down receptions, which ranks fourth among FBS tight ends.

An every-down tight end, Henry has been on the field 95 percent of Arkansas’ offensive plays on the season, including 443 of 470 run plays and 335 of 348 pass attempts. As a blocker, Henry hasn’t allowed a sack or even a quarterback hurry this season. His ability in the run game has helped Arkansas rush for more than 200 yards in an SEC-best six league games this season.

Since 2013, Henry has led all SEC tight ends in receptions and receiving yards with 111 and 1,569 respectively. He is one of just eight tight ends in league history to reach the triple-digit mark in receptions while playing in the SEC. Of the eight, he is one of four to tally more than 1,500 receiving yards. In addition, he is one of just three Arkansas tight ends to eclipse the 1,000-yard plateau, joining Williams (1,855 yards from 2007-10) and Chris Gragg (1,003 yards from 2008-12).