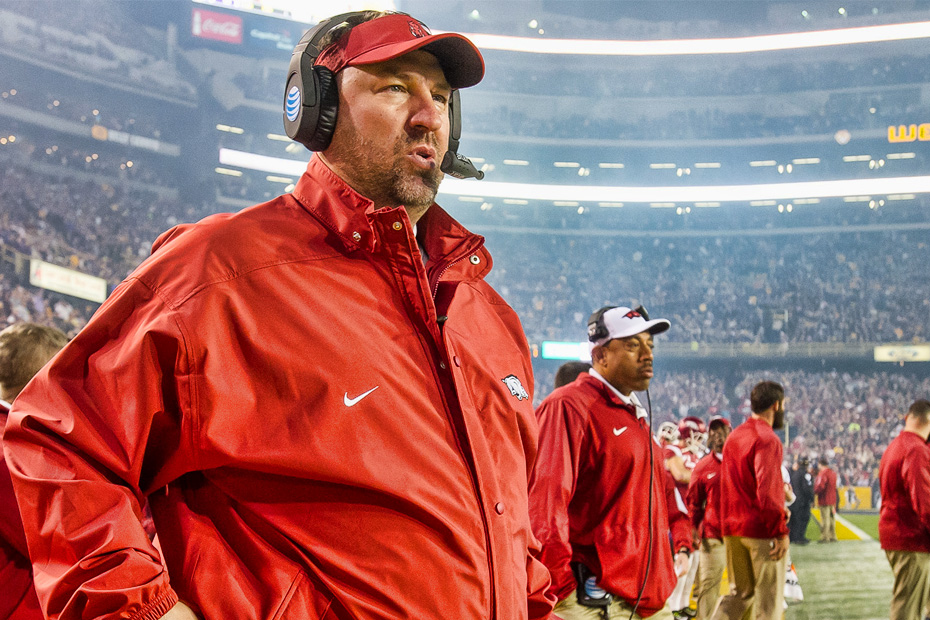 DataHog: Bielema On The Sidelines

FAYETTEVILLE, Ark. — Beyond the competition, pageantry, tradition and drama that fuel our passion for sports, the statistics and numbers behind our favorite past times are what we debate about the most.

From yards gained, to on-base and slugging percentages, to 40 times and field goal attempts, the data produced by sports tell a fascinating story and have become the main inspiration behind our new series DataHog, which will take a unique look into the numbers and stats behind Razorback sports.

We’re launching the series by taking a look at Razorback football’s Nov. 27 season finale game against the Missouri Tigers. More specifically, we’ll be analyzing the distance a coach covers when pacing along the sidelines and whether the coach is physically affected by big plays – both good and bad – on the field.

In order to find out, we recruited a prime volunteer – head football coach Bret Bielema. Coach Bielema was plenty game, so we equipped him with a FitBit Charge HR and tracked how many steps he took on the sidelines, and what his heart rate was during various moments in the game.

If we were to take Bielema’s step count from the Missouri game and consider it as an average, then multiply it through a 12-game regular season and a bowl game, Bielema will potentially have walked a total of 27.56 miles along the sideline and to-and-from the locker room during halftime. That’s more than enough distance to top a marathon, which equals 26.2 miles. And that’s not even accounting for extra steps when games go into overtime.

For further comparison, we ranked Bielema’s 1,324 steps per hour versus 10 occupations’ step counts gathered by the American Council on Exercise (ACE). Surprisingly, Bielema had a higher step count per hour than several occupations known for a lot of walking – including nurses, factory workers, and construction workers.

But what about his heart rate? After all, this has been one of the most memorable seasons in Razorback football history. Need a reminder? Consider the four-overtime game against Auburn, the Henry Heave during the Ole Miss thriller, and the one-point heartbreaker against Mississippi State.

I know my heart rate spiked up and down during those games along with just about every single Hogs fan watching the action, but what about Bielema? Does he get similarly fired up during big plays and momentous swings throughout a 60-minute game? Stats from the FitBit Charge HR point to a resounding “yes”.

Some game highlights as reflected by Bielema’s heart rate fluctuations:

1:30-1:50 p.m.: Kickoff sends Bielema’s heart rate up to 116, then drops to about 94 beats per minute (bpm) as Mizzou and Arkansas each have slow starts during their first possessions.

1:55-2:00 p.m.: Bielema’s heart rate spikes from 101 to 107 bpm during this period as the Arkansas defense pressures Lock into throwing an incomplete pass on second down, and a sack and fumble on third down. Alex Collins then gets a big run up the middle for a seven-yard gain.

2:30-2:40 p.m.: The Razorbacks successfully move the ball on the ground after Collins and Kody Walker go on long runs of 10, 13, and 22-yards, respectively. Bielema’s heart rate spikes from 99 to 105 bpm during this time span, capped by Collins’ 7-yard touchdown run that increases Arkansas’ lead to 14-0.

4:10 p.m.: After Brandon Allen gains four yards on a keeper run on third down, Bielema’s heart rate spikes to 107 bpm, the highest level since halftime.

Surprised by these stats? Intrigued to know more? Then keep following the DataHog series, and let us know what kinds of data based sports experiments you’d like to see next. Send your suggestions to reliwag@uark.edu.

In the meantime, a big thank you goes out to our first volunteer, Coach Bielema. Stay tuned for more adventures into the data-driven side of Razorback Athletics.