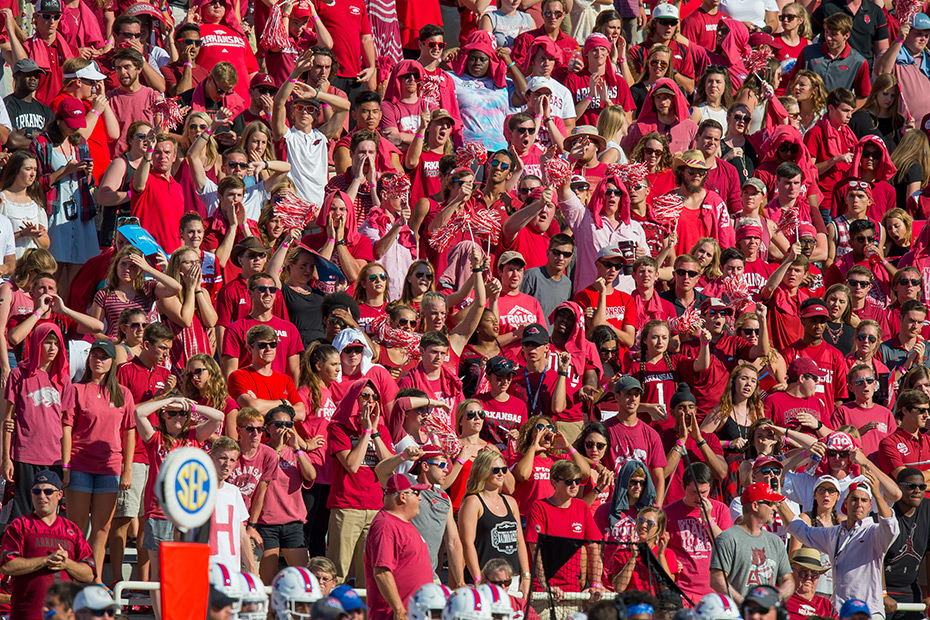 FAYETTEVILLE, Ark. – Crowd noise is an important component of home field advantage in sports, most notably in football. Fans projecting a deafening roar toward the field of play during critical moments can potentially cause communication miscues with the visiting team that lead to penalties, blown plays, missed field goals, or even turnovers.

On Saturday, Arkansas kicked off its 2016 season at DWRRS as the Razorbacks faced Louisiana Tech. We were on-hand to measure the stadium’s sound levels in decibels from warmups all the way to the final handshake between head coaches Bret Bielema and Skip Holtz.

Taking care to only measure sound organically generated by fans without any added background music from the speakers or the public announcer, here’s what we found out:

1. On average, Razorback fans at DWRRS generated 92.4 decibels of sound on Saturday

First, before we can quantify that statement, here are some points of reference from several sources:

On average, Razorback fans at DWRRS generated 92.4 decibels of sound throughout the game. How loud is 92.4 dB?

According to the U.S. Department of Health & Human Services, that amount of sound is equivalent to a motorcycle passing by or riding inside a subway car.

2. Top five loudest moments during the Louisiana Tech-Arkansas game were:

The loudest recorded sound at DWRRS during Saturday’s game was when senior defensive linemen Deatrich Wise Jr. and Jeremiah Ledbetter sacked Louisiana Tech quarterback J’Mar Smith for a 10-yard loss on third-and-10. Fans generated a booming 110.5 dB of sound during that critical play, equivalent to a symphony orchestra concert or power chainsaw.

3. Fans turned up the noise in the fourth quarter:

With Arkansas down 20-14 entering the fourth quarter, Razorback fans turned up the volume and generated the most crowd noise than at any other point during the entire game. DWRRS breached the 100 db mark seven times during this period while also accounting for three of the loudest moments of the game.

4. Crowd support during third down was key

When it came time to make DWRRS an uncomfortable place for the Louisiana Tech offense during third down possessions, Razorback fans answered the call. As mentioned before, the average crowd noise level at the stadium was 92.4 dB. This mark was exceeded during each Bulldog third down possession with fans being the most riotous during the fourth quarter. The amount of noise generated by fans inside DWRRS during third downs in the fourth quarter was equivalent to a helicopter flying overhead at 100 feet.

How much louder can you get during this season? Let’s see if we can make DWRRS the most intimidating place to play in the SEC and Power 5. Go Hogs!