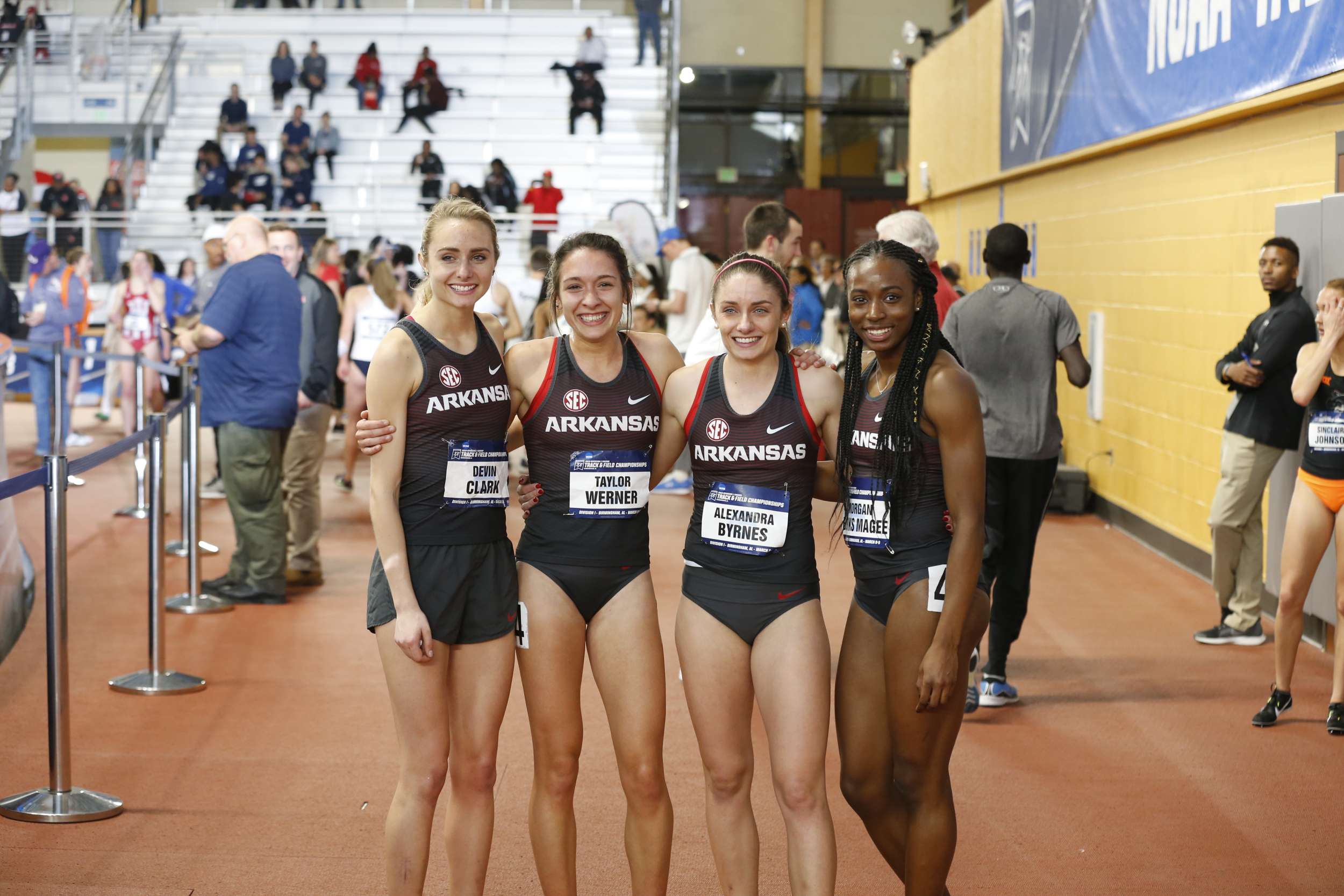 BIRMINGHAM, Ala. – Top-ranked Arkansas advanced six athletes to the finals of the NCAA Championships on day one at the Birmingham Crossplex with the DMR scoring the first points of the championships for the Razorbacks.

“We advanced everyone we thought we would,” said head coach Lance Harter.

“The 60-meters is such a dicey event, but we were able to get Kiara [Parker] through to the final, so that’s a bonus. Now it’s a situation where if we can harvest what we’ve sewn today along with the pole vault and the mile-relay we’ve got a fighting chance. I think it’s going to be a duel between us and USC with how well they advanced their athletes today. It was nice to get points [in the DMR], i think we’re going to be in good shape tomorrow,” Harter finished.

Arkansas advanced the second-most to the finals behind Southern California who advanced nine to Arkansas’ six. Payton Chadwick (60mH, 200m) was joined by LSU’s Kortnei Johnson (60m-200m) as the only double qualifiers on the women’s side. The Razorbacks currently sit in 19th-place with four points.

The string of Arkansas athletes advancing to the finals began on the track in the mile where Lauren Gregory and Carina Viljoen grabbed their spots after turning in the eighth and ninth-fastest times during preliminaries. Gregory qualified by way of an auto-Q finish taking second in heat four at 4:37.73, while Viljoen advanced on time running the fastest of the timed qualifiers at 4:37.95.

Next on the track was Arkansas’ defending NCAA Champion, Payton Chadwick as well as Janeek Brown. Chadwick turned in the quickest time from prelims at 7.93 (7.922) that tied her personal-best and program record mark set last year in the NCAA final. Brown makes her second appearance in the 60-meter hurdles final in as many years after running 7.98 (7.978).

Kiara Parker made her NCAA Indoor Championships in the 60-meters making quick work of the event as the senior advanced to the final after posting a time of 7.27q. Parker’s time was the final performance to advance in a field that is separated by only 12 one-hundredths of a second (.12) from 1-8.

Chadwick made her return to the track for the prelims of the 200-meters where she entered the meet tied for the sixth-fastest performance during the indoor season. Chadwick finished second in her heat running 23.01 that finished as the third-fastest from preliminary action.

Kethlin Campbell stepped to the track for prelims in the 400-meters, tied for the seventh-fastest performance in program history at 52.60. Campbell was in great position after 200-meters before a shove in traffic from Penn State’s Alexis Holmes dropped the sophomore back in the race where she finished in 53.90. Campbell finished 14th-overall earning Second-Team All-American honors.

Arkansas’ DMR of Devin Clark (3:26.62), Morgan Burks-Magee (53.29), Alex Byrnes (2:06.91), and Taylor Werner (4:30.04) combined to finish fifth in the event earning First-Team All-American honors. Werner’s split on the anchor leg was the fastest in the event amongst all competing teams.

The Razorbacks will return to the track tomorrow afternoon starting at 4:00 p.m. looking to capitalize on the six qualifiers from today, as well as the trio of pole vaulters Warner in the 3,000-meters and a 4×400-meter relay.