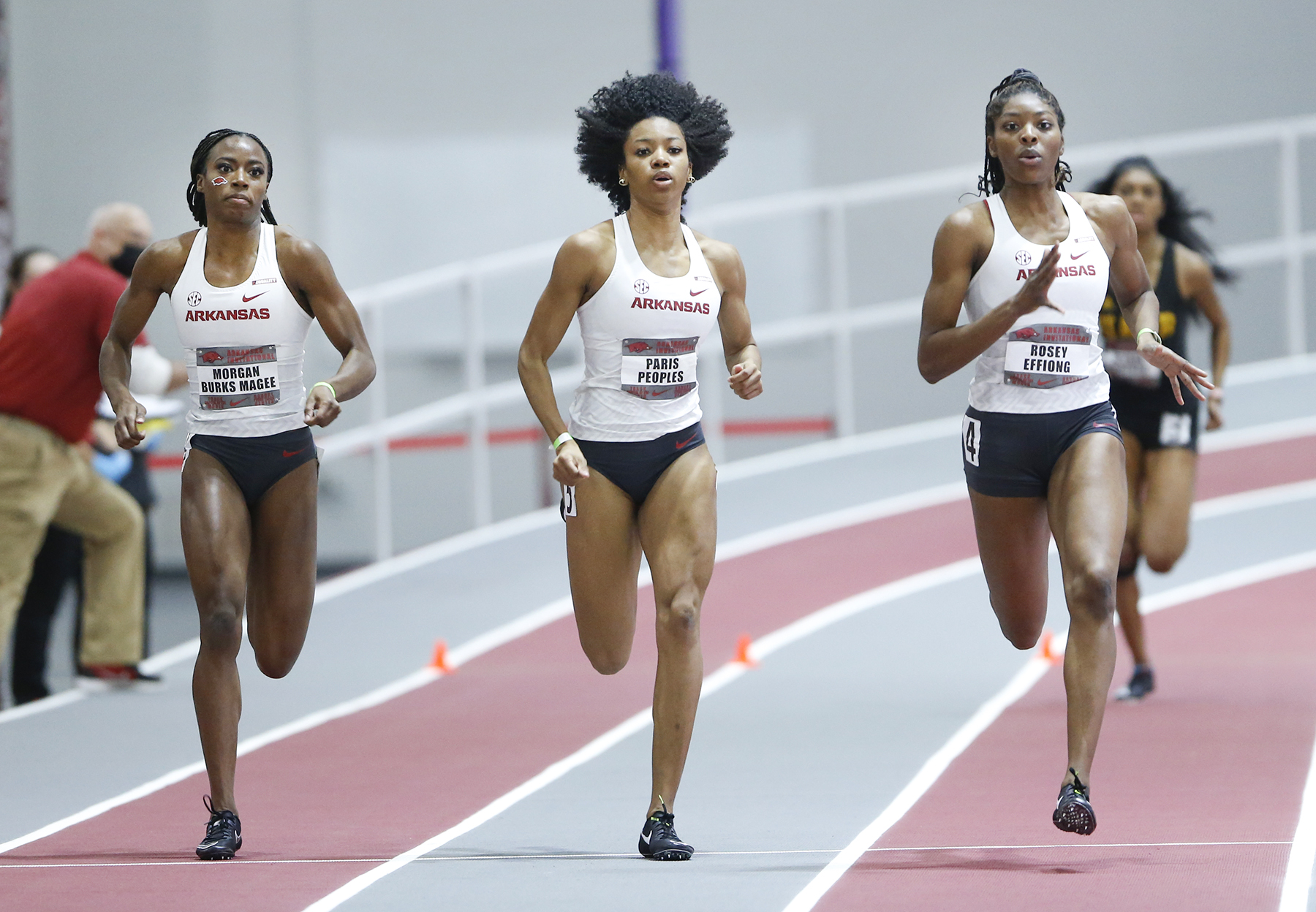 FAYETTEVILLE, Ark. – Following an array of stellar performances to open the 2021 season, the Razorbacks are prepared to face an elite level of competition in Friday’s Wooo Pig Classic in the Randal Tyson Track Center.

A live stream through SEC Network+ on the ESPN app (https://es.pn/2MeioqG) starts at 2 p.m. and live results are available through Flashresults.com (https://bit.ly/39OLXHG).

“We were really pleased how we got through the initial competition this last Saturday,” remarked Arkansas women’s head coach Lance Harter. “The kids were super excited for the opportunity to get a race in after a 10-month layoff.

“This week, if you compete in something that is ballistic by nature, the sprints are loaded with the teams competing here. We will have some of the best sprint teams in the United States. Our ballistic events are going to be simply outstanding, and we will definitely have our hands full.”

Elite level showdowns await in the sprints and hurdles. The 60m will have five sprinters with best times under 7.30, headlined by Julien Alfred of Texas, who swept 2020 Big 12 titles in the 60m and 200m. Representing the Razorbacks are Tiana Wilson, who set a career best 7.34 last week, and Jada Baylark.

LSU’s Symone Mason, 2020 SEC bronze medalist, leads the 200m entrants with five sprinters under 23.35. Arkansas’ crew of six sprinters is led by Jayla Hollis, who set a career best of 23.31 in sporting a pair of victories in her Razorback debut last week to earn SEC Freshman of the Week honors.

The 60m hurdles includes the current collegiate leader in LSU’s Milan Young at 8.17 while her Tiger teammate, Alia Armstrong, posted a 7.95 on the Tyson Track last season. Challengers include USC’s Mecca McGlaston and Kentucky’s Masai Russell.

Razorback Daszay Freeman, fourth in the 2020 SEC Indoor, is scheduled to race in the hurdles for the first time this season and will be joined by teammates Hollis, Yoveinney Mota and G’Auna Edwards, who is the top entrant in the long jump.

“Anyone who wins a race in the ballistic events is going to have to knock off multiple All-Americans to grab first place,” noted Harter. “I know it’s early in the season, but there is going to be a clash of titans this week.”

The talent in the 400m will serve two events as the 4×400 relay offers potential for fireworks to close out the meet. Setting a meet record of 3:34.79 in the Arkansas Invitational, the Razorbacks are the current world leaders while Kentucky and Texas follow with times of 3:35.52 and 3:35.98, respectively.

USC’s duo of Bailey Lear and Kaelin Roberts have two of the top three times among entrants in the 400m and will face a challenge from Kennedy Simon of Texas and Kentucky’s Alexis Holmes.

“The mile relay might be one of the feature races of the meet,” stated Harter. “In looking at the entries there is going to be a team of All-Americans in the second section as we only run four teams in the fast section. Everybody is loaded in that event and it could be a preview of the final at the national championship with those same teams going head-to-head.”

LSU’s Lisa Gunnarsson, 2020 SEC Indoor champion, will offer a test for the Razorback pole vault crew as she has already cleared 14-10 (4.55) this season. Nastassja Campbell, who won the Arkansas Invitational, leads the UA squad of seven vaulters along with Bailee McCorkle and Elien Vekemans.

“Some of the distances will be set up to be really fast for us and we’ll look forward to that challenge,” said Harter. “The 3,000m is going to be outstanding.”

Arkansas will have eight entries in the mile with Kennedy Thomson leading the group after she set a career best in winning the 1,000m last week. Challengers include the Oklahoma State combo of Taylor Roe and Gabby Hentemann.