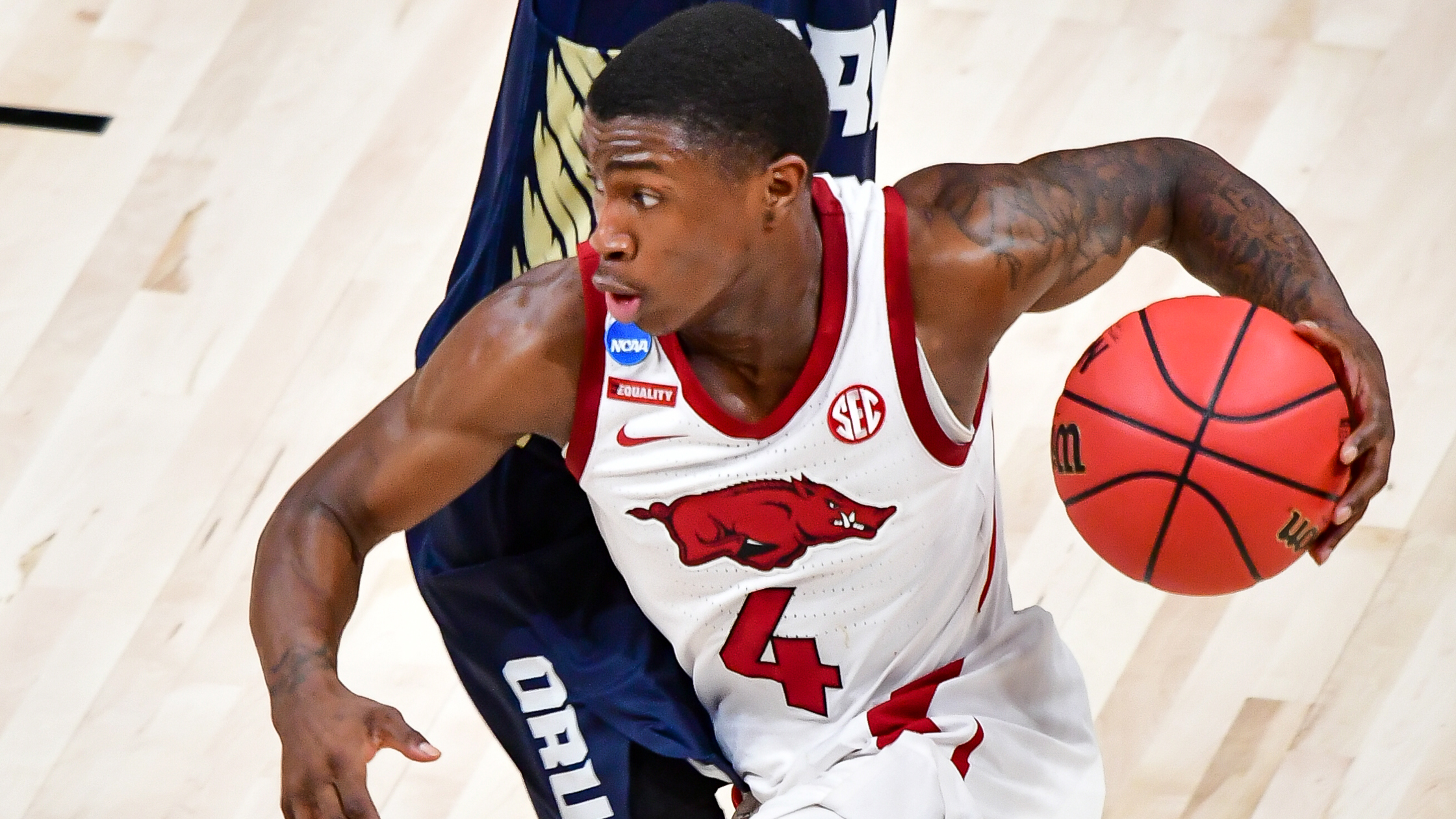 INDIANAPOLIS, Ind. – Arkansas, seeded third and ranked 10th, survived and advanced to the school’s first Elite Eight since 1995 on Saturday night in Bankers Life Arena thanks to a heart-stopping, roller coaster 72-70 win over #15 seed Oral Roberts.

The Razorbacks (25-6) battled back from a seven-point halftime deficit that ballooned to 12 in the second half to be all square at 70-70 with under a minute remaining. Jalen Tate’s drive to the basket was cut off in the late but the senior found Davonte Davis, who made a move around his defender and sank a jumper to give Arkansas a two-point lead with 3.1 seconds left. The nation’s leading scorer Max Abmas’ 3-point shot bounced off the rim as time expired to send the Hogs back to the Elite Eight in over 25 years.

Davis was incredible in the second half, scoring 14 of his 16 points on 6-of-11 shooting and grabbing five of his eight rebounds. Tate led the Razorbacks with 22 points and was one of four Hogs in double digits. Moses Moody added 14 and Justin Smith posted his sixth double-double of the season – and fifth over the last 16 games helping Arkansas post a 14-2 record over the span. He finished with 12 points and 14 rebounds. Smith pulled down 11 offensive rebounds with Arkansas grabbing 18 offensive boards to ORU’s six.

Arkansas was down one (21-20) in the rebound battle at halftime but out-rebounded the Eagles 26-14 in the period to hold a 46-35 advantage for the game on the boards.

The Razorbacks overcame a slow start in the first half that saw the team shoot just 31.4% and go just 1-for-7 from 3-point range. Arkansas flipped the script in the second half, however, shooting 42.9% from the floor and only attempting two 3-pointers. For the game, Arkansas outscored the Golden Eagles 42-30 in the paint and held the nation’s 12th-best 3-point shooting team to just 25.8% for the game – 2-of-14 (13.4%) in the second half.

Arkansas advances to take on top-seeded Baylor in the South Regional final on Monday night at 9:57 pm (CT) / 8:57 pm CT on CBS with a ticket to the Final Four on the line.