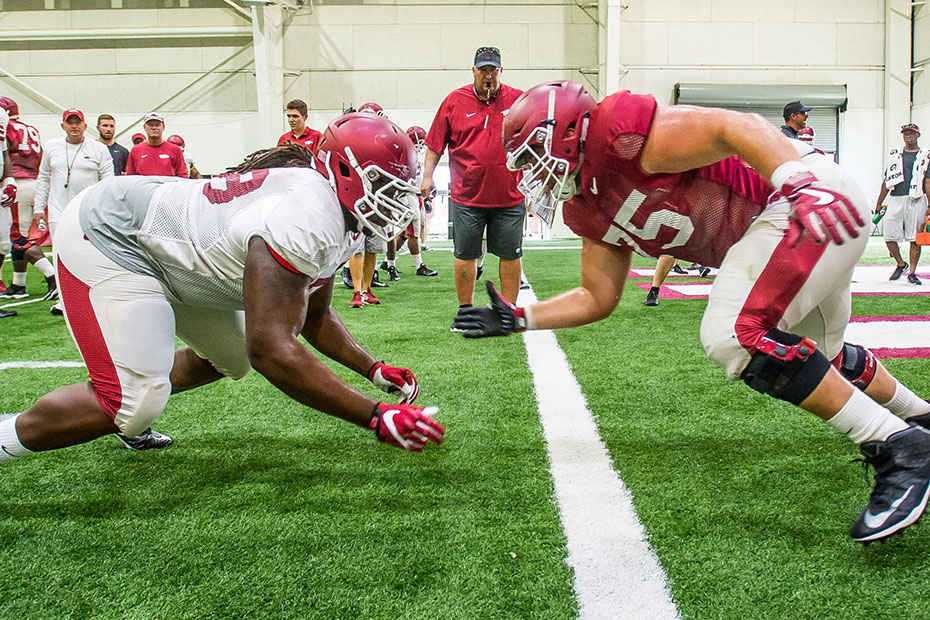 FAYETTEVILLE, Ark. – The pads went on, and the intensity went up.

The first fully padded practice of preseason camp is complete as Arkansas worked out for 24 periods Tuesday at the Fred W. Smith Football Center. There was contact, but the defense was not allowed to take players to the ground in an effort to prevent injuries and keep players fresh.

Practice began indoors due to the threat of rain and thunderstorms. At the start of the seventh period, the Razorbacks moved outdoors before returning indoors for the final six periods.

Practice Quick Hits
• Following team stretch, practice opened with head coach Bret Bielema orchestrating the “Hog Drill.” The “Hog Drill” pins an offensive player against a defensive player 1-on-1 at the goal line. The object of the “Hog Drill” is to beat your man off the ball, testing the players’ ability mentality and physically. Preseason All-American offensive lineman Dan Skipper and Chuck Bednarik Award watch list member Deatrich Wise Jr. squared off to open the drill.

• Quarterback Austin Allen had several first down completions to multiple receivers during the first period of team work, including a 35-plus yarder to wide receiver Cody Hollister. It was the first of many big receptions for Hollister on the day.

• Linebacker Brooks Ellis made a run stop near the line of scrimmage.

• Defensive backs Henre’ Toliver, Jared Collins and Byron Keaton each had pass breakups in 1-on-1s, while Hollister led the way for the receiving corps with a couple of first down receptions.

• Quarterback Ricky Town got the scoring going during the 7-on-7 red zone period with a touchdown pass to wide receiver Deon Stewart.

• Allen followed a few plays later with a scoring toss of his own to wide receiver Keon Hatcher in the corner of the end zone. Rolling to his right out of the pocket, Allen hit Hatcher with a back-shoulder throw before the corner could get turned around.

• Kevin Richardson collected his third interception of camp during one of the final team periods indoors, while Wise disrupted multiple passing plays that would have gone for sacks.

• Freshman running back Devwah Whaley had a couple of nice runs on the day, including one where he cut outside for extra yardage.

Williams Talks Running Game And Putting Pads Back On

Up Next
The Razorbacks will return to the practice field Wednesday at 9:10 a.m.