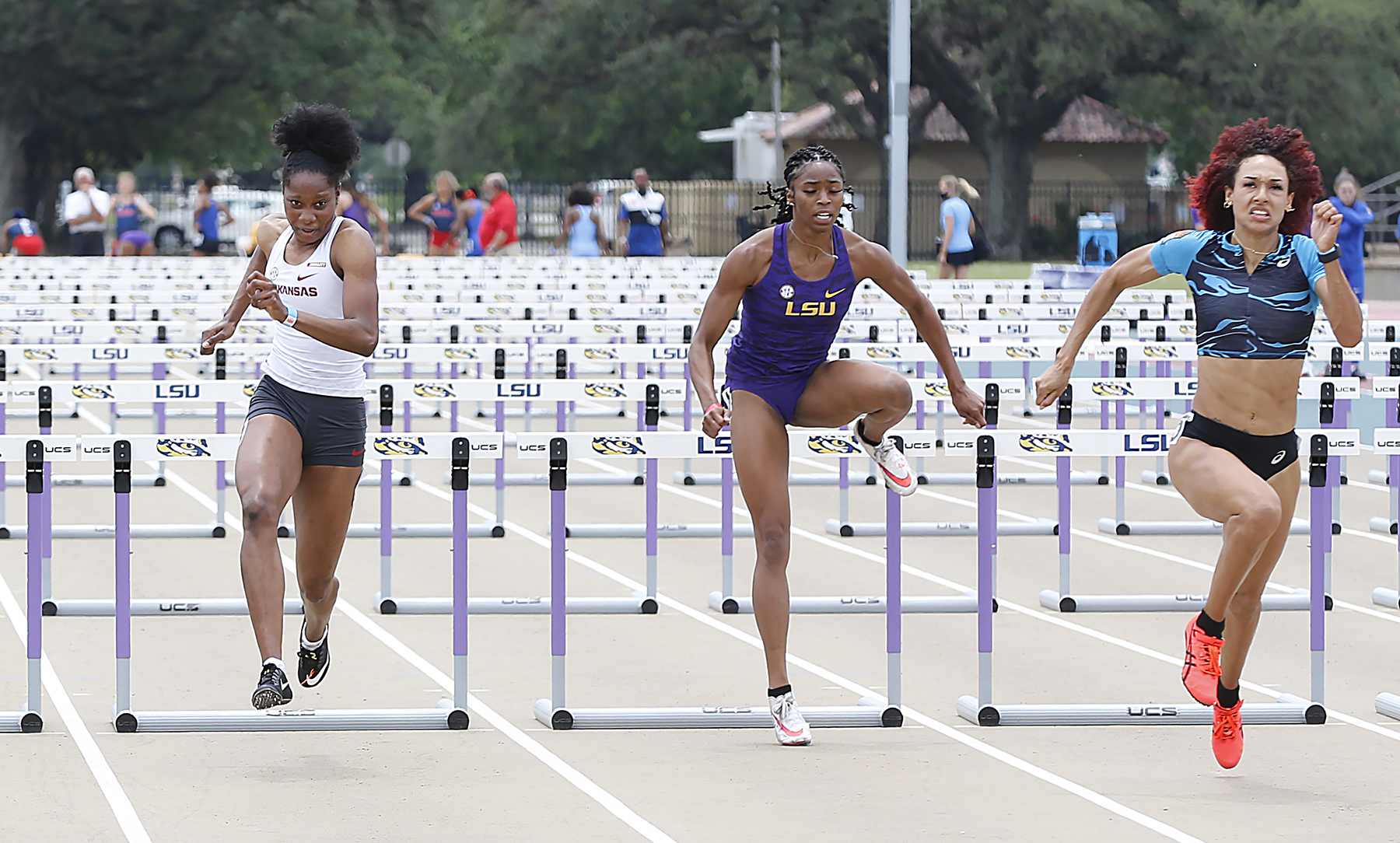 Five victories for No. 2 Arkansas at LSU Invitational, Gear wins 1,500m in Clovis

BATON ROUGE, La. – No. 2 Arkansas claimed three victories while finishing as the top collegian in two additional events during a productive day of competition at the LSU Invitational held inside Bernie Moore Stadium on Saturday.

Arkansas hurdlers swept the top four places in the 100m hurdles, with two current Razorbacks and a pair of alums. Taliyah Brooks produced a 12.73 victory (0.9 wind) while Daszay Freeman (12.93) and Yoveinny Mota (12.95) followed in second and third place as the top two collegians. Payton Chadwick was fourth in 12.98. Jayla Hollis posted a 13.39 to finish eighth in the race and 10th overall.

The performances by Freeman and Mota were career best times and moved them to No. 3 and 5, respectively, on the UA all-time list. For Mota, who equaled the Venezuelan national record with a 12.97 earlier this season, the 12.95 broke that mark and secured the national record. Freeman improved her previous best of 12.96.

Tiana Wilson hammered another victory by improving her previous best by half a second in the 400m. Wilson clocked an outdoor collegiate-leading 51.21 to defeat Florida’s Taylor Manson (51.58). Morgan Burks-Magee placed sixth with a 53.32.

Of the eight finals Wilson has contested this outdoor season, she has won six of them over three events, winning a pair of races each at 100m, 200m, and 400m. Wilson now ranks No. 5 on the UA all-time list.

With No. 1 LSU and No. 2 Arkansas in the same meet, the pole vault came down to current outdoor collegiate leader in Razorback Nastassja Campbell against NCAA Indoor champion Lisa Gunnarsson of LSU.

When they both cleared 14-8 ¼ (4.48) they were the lone two vaulters remaining. However, Campbell needed three attempts to make the bar while Gunnarsson required two. At the previous height of 14-4 ½ (4.38), Campbell held the advantage having made it on her first attempt while Gunnarsson needed two tries.

The 4×100 relay opened the running session for Arkansas as they finished third in 44.62 with a foursome of Mota, Wilson, Hollis, and Baylark. Athletics Canada won the race in 43.77 with Florida runner-up in 43.97. Ole Miss finished behind the Razorbacks in 44.66.

Arkansas alum Sparkle McKnight improved her time in the 400m hurdles for this season with a 56.38 victory over a 56.88 from Deonca Bookman and 56.93 by Cassandra Tate.

In late night racing, which finished even later than scheduled due to a blackout, Krissy Gear produced a victory of 4:09.00 in the Invitational 1,500m. The career best time for Gear, improving her previous best of 4:21.21, makes her the No. 9 performer among U.S. collegians and No. 2 on the UA all-time list.

“The blackout made me more excited for the race, and I thought the lights out made it more fun,” said Gear. “I was super thrilled to toe the line with BYU again. They’ve been crushing it this season, so I was looking forward to that. Realizing I was right behind Whittni got me fired up and gave me more confidence, because I just kept trying to tell myself, ‘I belong up here’.”

“The result was extremely encouraging because I opened my outdoor season with a very lackluster time and race,” noted Gear, who broke the UA indoor record in the mile earlier this year. “So, naturally, I was thrilled to be able to turn around four weeks later and improve my time and racing abilities.

“As for moving up the all-time list at Arkansas, I definitely have those same fangirl feelings I did when I surprised myself and ran 4:31 in the mile indoors and put my name up there around the likes of Dom and Nikki.”