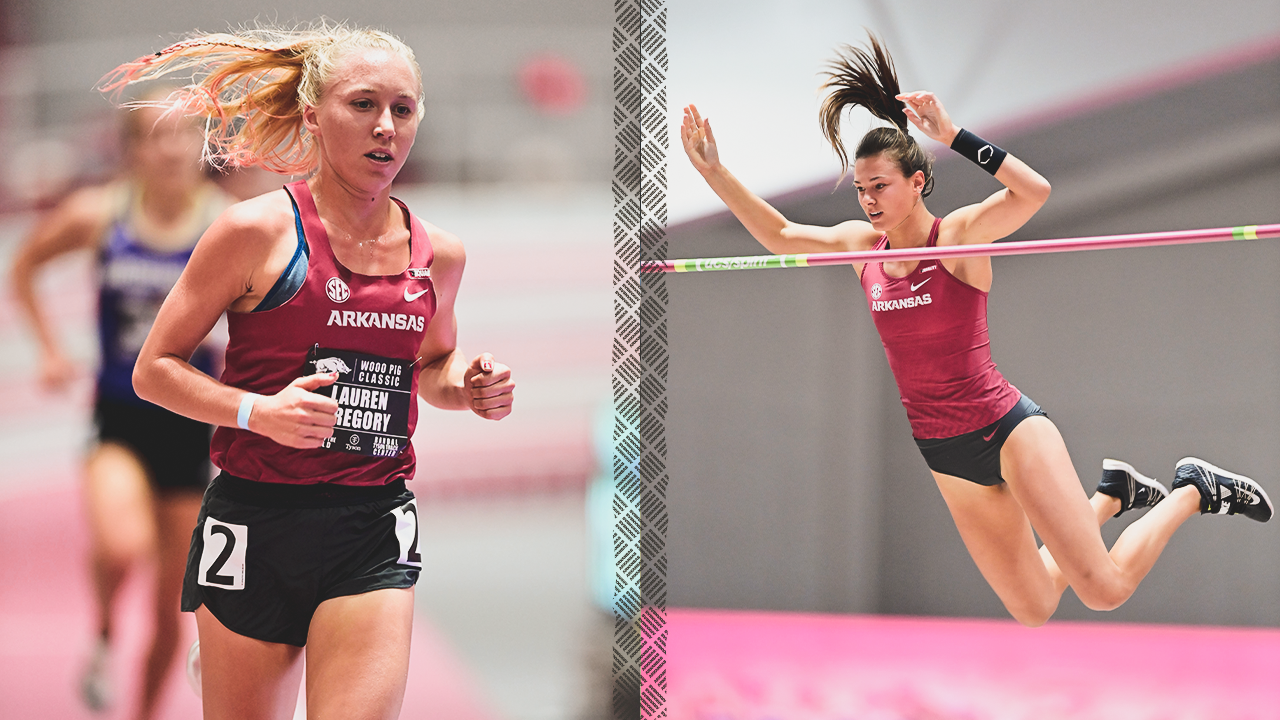 FAYETTEVILLE – Stellar performances by Razorbacks in the Wooo Pig Classic included Lauren Gregory winning the 5,000m in a career best 15 minutes, 34.58 seconds, while Elien Vekemans set a career best of 14 feet, 1 1/4 inches to claim the pole vault at the Randal Tyson Track Center.

“No doubt about it, we had a great meet,” said Arkansas women’s head coach Lance Harter. “It started with us wanting to do a 3k and 5k time trials to get those kids a chance to qualify early for the indoor national championships.

“Then it just kind of developed into a total track meet. We ran some odd distances, but we were able to get these kids thinking about what’s going to happen in January. All-in-all we just had some breakthrough performances.”

Gregory improved her previous best of 15:36.51, set last in January, and improved her No. 2 status on the Arkansas all-time list. She also bettered the 2021 indoor American best time of 15:36.22 set by Arkansas alum Katie Izzo during the Razorback Invitational last January.

“I guess I haven’t raced in December before, probably not since high school,” Gregory noted. “I didn’t know what to expect, but I knew the field would be good. We had a pacer, and it was kind of like what we do in practice. Just hang on and roll and see what you can do. I’m happy with it and I’m happy to PR for sure.”

“I know we’ve put in so much work, so I knew there was fitness in there, I just didn’t know what it would look like,” said Gregory. “I think having a pacer helped so much. She was so even, and it helped so much to get in that rhythm. Because even when she taps out, you can still lock into that rhythm.”

The time by Gregory ranks her the No. 6 performer with the No. 8 performance all-time in the Tyson Center, with six of the eight top marks having been attained during a NCAA Indoor Championship hosted by Arkansas.

In fifth place was Razorback Isabel Van Camp with a debut time of 16:17.81 after clocking a 9:25.29 split at 3,000m. The previous longest track distance Van Camp had raced was a mile.

“I didn’t know, but she hadn’t even raced a 3k yet,” stated Gregory. “She jumped straight from the mile to the 5k, which is she if fully capable of, obviously. She had such an amazing cross country season, I’m just so proud of her. It’s so impressive to take that beast on, for what it is with 25 laps around the track, after only doing eight, is so impressive.”

“It’s was a lot of fun, actually, because I’ve been waiting to compete again for a while,” noted Vekemans, who made her Razorback debut during the 2021 indoor season, but missed the outdoor campaign. “I feel like the hard workouts are paying off, which is really nice.

“Today I’m only jumping off a short run, so once I get back to my full run it will be better still. I have a lot to improve yet. I was kind of struggling with finding the right pole at the earlier heights, but once I got onto the right pole and figured out my steps I just had to hit it hard and go for it.”

Jolly improved her previous best of 9:09.45 (set at the January Wooo Pig Classic) and moved to No. 9 on the UA all-time list ahead of teammate Krissy Gear, who paced this race through 1,800m (5:24.39). Sydney Thorvaldson, a Razorback frosh competing unattached, posted a time of 9:30.86 to place sixth.

Razorbacks competing unattached, but producing impressive marks included Jada Baylark winning the 60m in 7.25, just a tenth of a second off her school record of 7.15. The combo of Daszay Freeman (8.14) and Yoveinny Mota (8.15) went 1-2 in the 60m hurdles, with Mota just off her national record of 8.14.

A lean at the finish earned Shafiqua Maloney a very narrow victory in the 1,000m with a time of 2:46.80, which was matched by Oklahoma State’s Gabija Galvydyte. They were separated by 0.005 of a second. Quinn Owen placed fourth with a 2:51.43.

Effiong anchored the winning relay in 53.10 while Maloney supplied a 52.75 anchor on the runner-up squad.