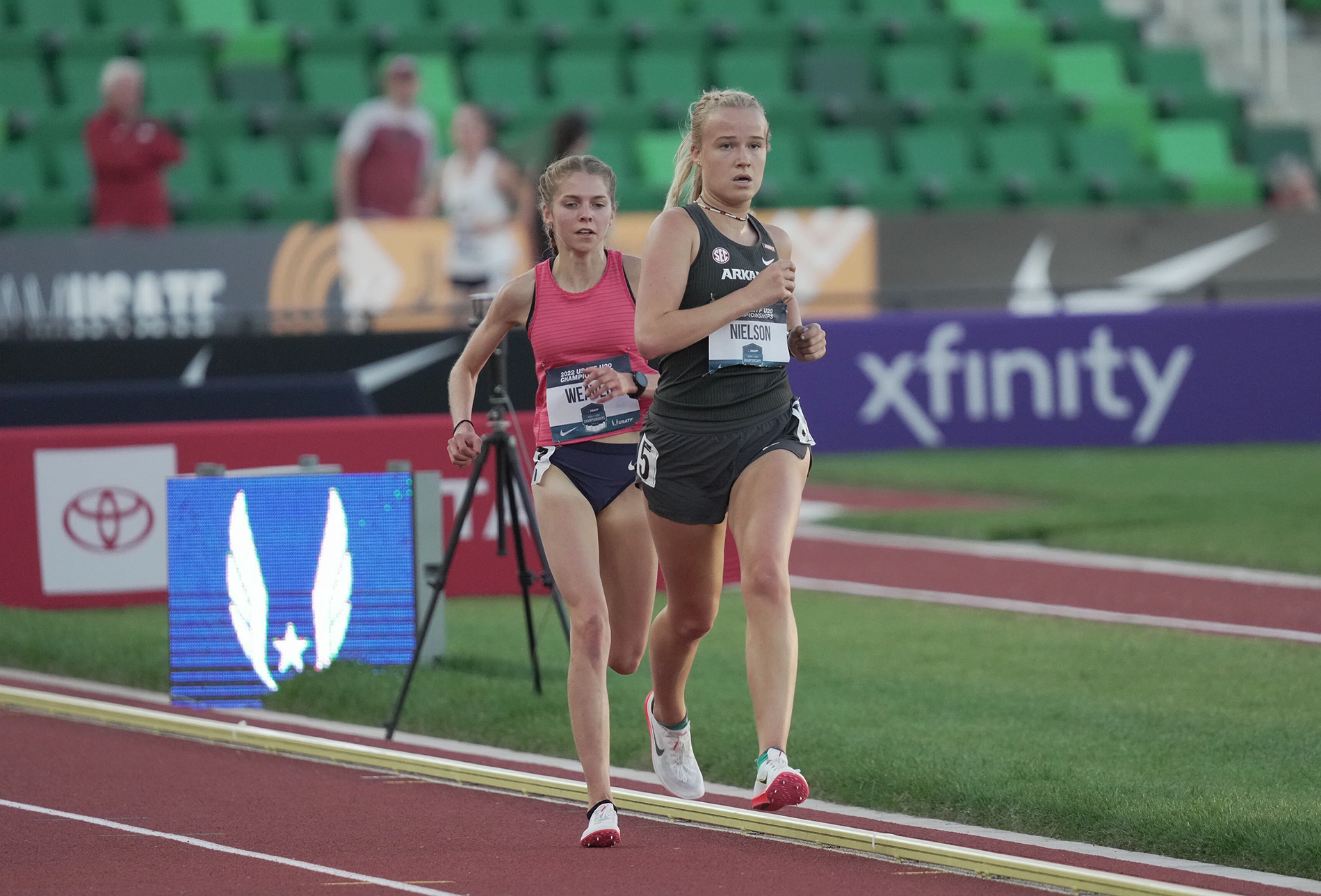 EUGENE – Razorback freshman Heidi Nielson set a career best of 16 minutes, 30.50 seconds to better the world U20 standard as the silver medalist in the USATF U20 meet held at Hayward Field.

Nielson will represent the United States in Cali, Colombia, this summer at the World U20 Championships.

“It’s awesome,” stated Nielson, who had been sidelined during the outdoor season after an injury during indoors. “I’ve been patient, letting my body recover from a stress reaction. I’ve been continuing to train really hard since that happened, so it’s nice to finally have something to show for it while having a great race.

“I’m super excited to make another team, and you never take it for granted. It’s going to be an amazing experience. I’ve been fortunate to do it before, and I’m excited to it again. Hopefully I can perform better at that stage this time.”

In the USATF Championships, also held at Hayward Field, Razorbacks advanced well from first round prelims.

Britton Wilson won a heat of the 400m hurdles in 55.79, which ranked third best overall in the qualifying round behind a 54.11 by Sydney McLaughlin and a 55.50 for Shamier Little, an Arkansas volunteer assistant.

Rosey Effiong had the second fastest time in the 400m, winning the third of four heats in 51.17 over Florida’s Talitha Diggs (51.32), the NCAA champion. Third and fourth place in the third heat generated the fourth and sixth fastest times overall with Kaylin Whitney (51.36) and UCLA’s Shae Anderson (51.51). Jaide Stepter led the field with a 51.05.

Lauren Gregory produced a time of 4:10.30 to advance in the 1,500m as a time qualifier, placing sixth in the first of three heats. Alum Nikki Hiltz placed third as an auto qualifier with a 4:15.05. Krissy Gear finished 10th in the final heat with a time of 4:20.04 and didn’t advance.

Just missing on advancing to the semifinal in the 100m were current Razorback Jada Baylark (11.31) and Arkansas alum Kiara Parker (11.21). The final time qualifier was 11.19.

Nielson’s time improved her previous PR of 16:54.02 which was set as a silver medalist in the 2019 USATF Juniors, and qualified her for the Pan-American U20 Championships, where she placed fifth in 5,000m.

“What’s a credit to Heidi, she’s been on two US teams before, once in cross country and once in outdoor,” noted Arkansas women’s head coach Lance Harter. “I think she was not going to be denied and just kept convincing me that she was ready. She wanted to give it a shot to see what would happen.

“The opportunity to make the team was just icing on the cake for this season for her. We look forward to the future.”