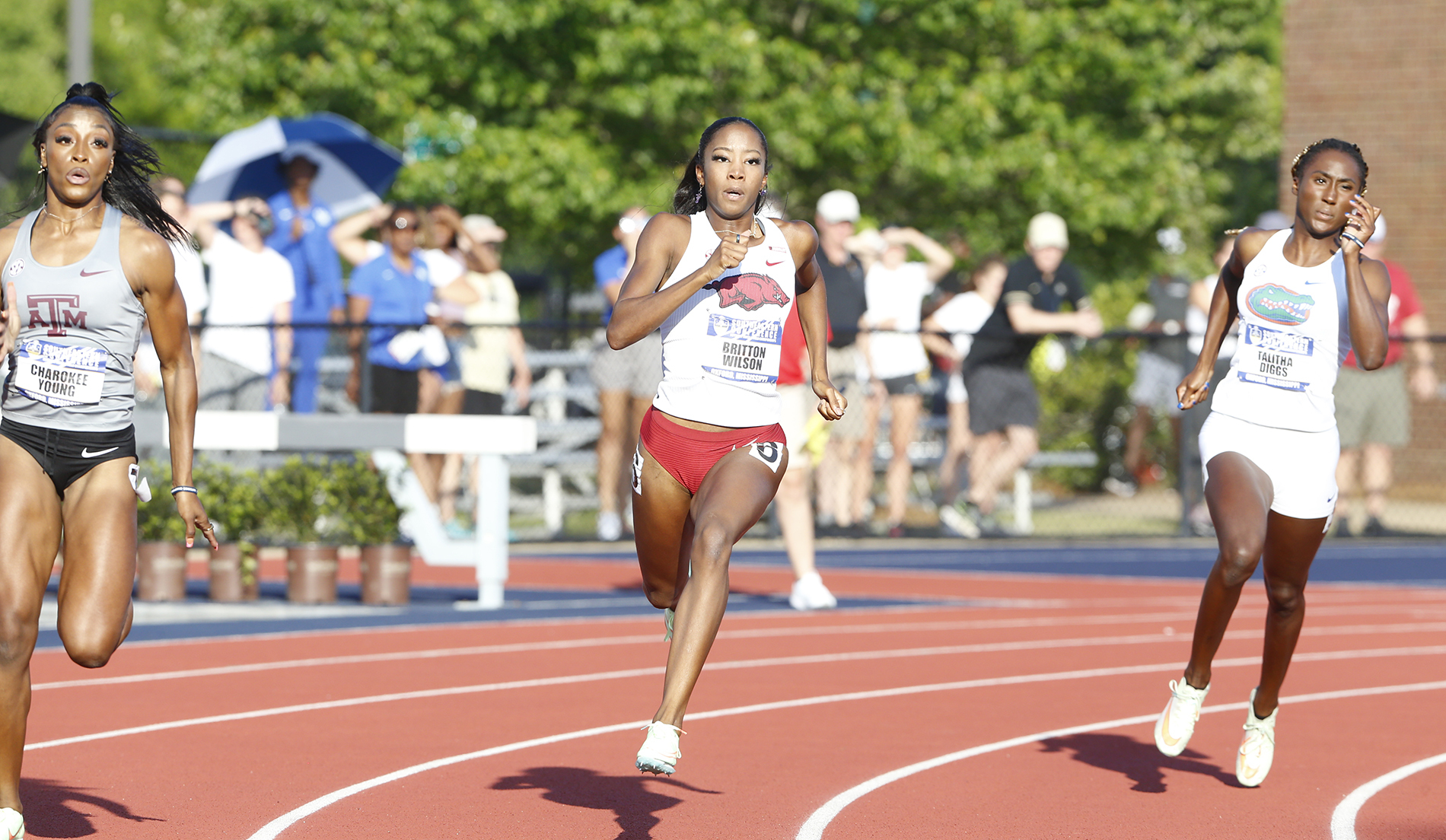 Oxford, Miss. – Arkansas sophomore Britton Wilson make history on the final day of the SEC Outdoor Championships in becoming the first person to capture league titles in the 400m and 400m hurdles in the same meet.

A career best victory by Amanda Fassold led an 18-point production in the pole vault from a 1-4-6 finish. Fassold cleared 14-9 (4.50) on her third attempt, defeating NCAA champion Lisa Gunnarsson of LSU, and moved to No. 6 on the UA all-time list.

With the SEC Outdoor team title coming down to the final event, a pair of schools broke the collegiate record in the 4 x 400 relay while Arkansas broke its school record, and the championship was decided by four points.

Florida scored 107 points while Arkansas followed with 103, and the Gators became the first school other than the Razorbacks to claim the SEC Outdoor title in the past seven years. The runner-up finish stopped a streak of six consecutive victories for Arkansas prevented the Razorbacks from earning an eighth SEC Triple Crown.

Wilson’s feat produced a world-leading time of 53.75 seconds in the hurdle race as she broke her own Arkansas record of 54.23 set during the prelims on Thursday. Posting a career best time of 50.05 seconds in the 400m, Wilson bettered the Arkansas school record of 50.25 set by Taylor Ellis-Watson in 2016.

In both events Wilson moved to No. 6 on the all-time collegiate list.

Racing in the 400m first on Saturday, Wilson challenged Texas A&M’s Cherokee Young, the current collegiate leader with a 49.87 this season. Coming off the final curve, Wilson pulled even with Young for 10m on the homestretch and then sped away for the victory.

Razorbacks in the 400m final included Rosey Effiong and Morgan Burks-Magee. Effiong placed seventh in 52.12 while Burks-Magee finished eighth in 52.21.

With the 1,500m and 5,000m held on the final day of the SEC Championships, Lauren Gregory led the Razorbacks effort at both distances.

The 13 points from the 5,000m had Arkansas in second place with 97 points, trailing the 103 Florida tally and ahead of LSU’s 96.5. LSU didn’t contest the 4 x 400 relay, and Florida’s fifth place left them the deciding four-point cushion.

Finishing behind Fassold in scoring positions in the pole vault were Kaitlyn Banas and Mackenzie Hayward. Banas vaulted 13-9.25 (4.20) to place fourth while Hayward cleared the same height to finish sixth.

Additional points contributed on the final day of the SEC Championships included Baylark running 11.24 as the bronze medalist in the 100m and Yoveinny Mota placing fourth in the 100m hurdles with a 13.06.