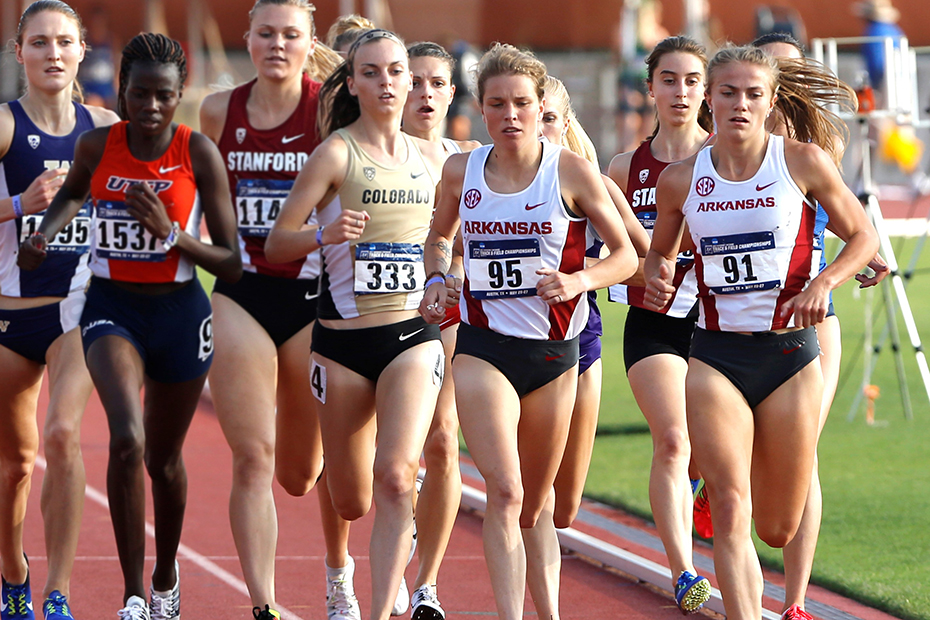 AUSTIN, Texas – Following three hot and grueling days in Austin at the NCAA West Preliminary Round the No. 2 Arkansas women’s track and field team finished the weekend with 13 additional NCAA entries to its claim.

Arkansas’ final national qualifier count, including the heptathlon is 17.

Distance Doubles
NCAA indoor mile podium finishers Nikki Hiltz and Therese Haiss earned automatic bids to Eugene, Oregon as the first and third fastest performers of the day the 1,500, respectively. Hiltz and Haiss ran as a unit, interchanging as the lead runner throughout the duration of the race. The pair never ceded the inside lane or the lead to the surging pack behind them and crossed the finish line .38 seconds a part to secure their spots at nationals.

“We saw heat one was slow and tactical and so we decided to work together to make sure our heat was the fast heat,” Hiltz said. “It was a total team effort.”

Their underclassmen teammates followed their lead as freshmen Taylor Werner and Abby Gray advanced out of the 5,000 first round as top-seven finishers in heat two. Werner was the fastest true freshman in the event, clocking 16 minutes, 32.12 seconds for third while Gray fought her way into West region’s the top-12, as the fastest non-automatic qualifier with 16:41.35. Arkansas last advanced two runners to nationals in the 5,000 in 2014 (Dominique Scott and Diane Robison). Werner and Gray’s qualification marks the first time in program history that Arkansas has secured two 5,000-meter national entries off the heels of freshmen.

Harper Helps Relays Roll On
The Razorbacks advanced both the 4-x-100 and 4-x-400-meter relays out of the West Prelims courtesy of versatile senior sprinter Daina Harper. Already qualified as an individual in the 400, Harper teamed up with Jada Baylark, Kiara Parker and Payton Stumbaugh to push the 4-x-100 through and returned to the track later in the day with Ceara Watson, Damajahnee Birch and Sunkietra McCallister, anchoring the 4-x-400 to a sixth-place finish.

The University of Oregon in Eugene, Oregon will host the 2017 NCAA Outdoor Championships on June 7-10 for the fifth consecutive year. The women’s competition will be held on Thursday, June 8 and Saturday, June 10. A team champion will be crowned following completion of the events on Saturday afternoon.